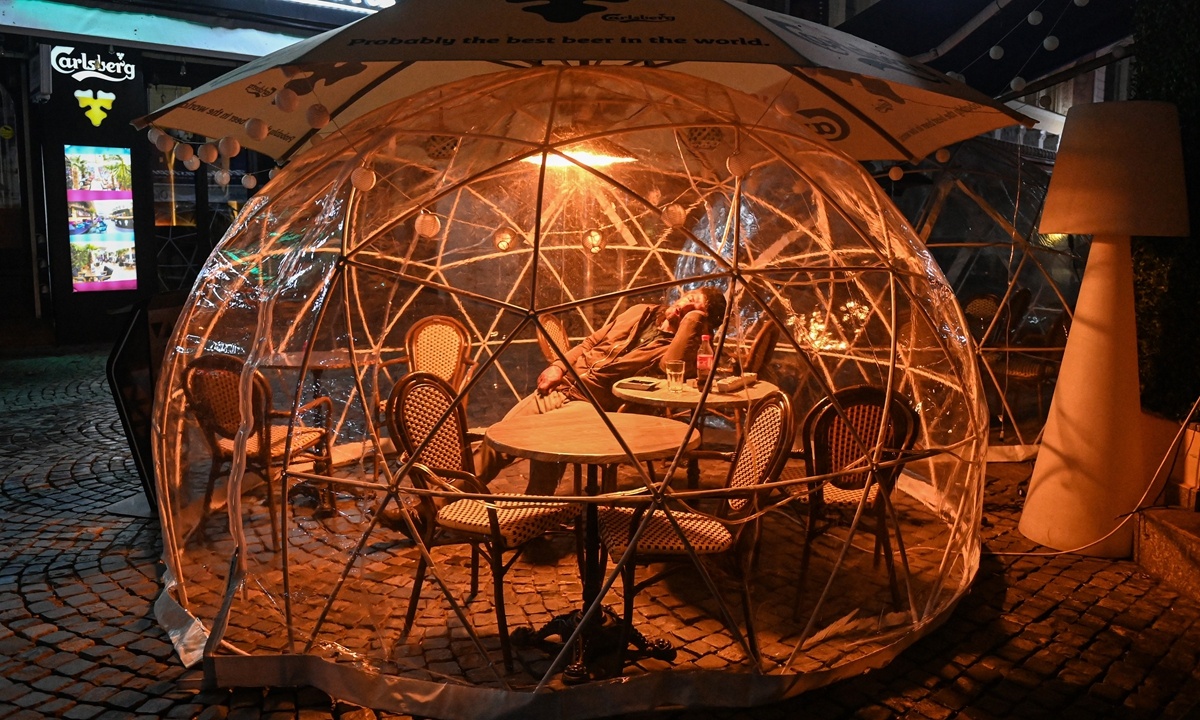 A man sleeps inside a protection bubble, used by a pub for its customers as part of coronavirus social distancing measures, during a newly-instated curfew in Bucharest, Romania late on Monday.(Photo: agencies)

It now takes Chinese people two to three hours longer to go to sleep due to the epidemic during the past year, with more than 300 million Chinese people currently suffering sleep disorders, according to a recent sleep research report issued by Chinese Sleep Research Society (CSRS).

Over the past year, because of the epidemic, people are spending more time at home, but the overall time it takes to fall asleep has been prolonged by two to three hours, and searches for sleep problems on the Internet have increased by 43 percent, CCTV reported on Sunday.

Among the 300 million Chinese people who are suffering sleep disorders, more than three-quarters of them fall asleep after 11 pm, and nearly one-third cannot fall asleep until 1 am.

Sleep issues have attracted widespread attention from netizens, with many of them agreeing that they do have sleep problems. The topic "epidemic has prolonged overall time to fall asleep by two to three hours" was viewed 470 million times on China's Twitter-like platform Sina Weibo, with about 410,000 netizens joining the discussion as of press time.

A comment made by TV show host Zhu Guangquan he "felt sleepy all the time apart from bedtime" evoked a great deal of sympathy from netizens. Many Weibo users agreed that the remark is really sad, as they feel asleep during work but cannot sleep at bedtime. Some commented that they only get to sleep as late as 2 am.

Some netizens also joked, "Don't stay up late, as it's really bad for your phone."

However, Wang Jian, the director of the Psychological Department at the Guang'anmen Hospital, explained in an interview with CCTV that it is not necessary to get eight hours of sleep. What is important is that you have enough sleep for four to five sleep cycles.

"One sleep cycle develops from light sleep to deep sleep, and then enters into the rapid eye movement stage with dreams. This repeats for four to five cycles, and then you wake up," Wang said.