Epidemic has not affected foreign companies' confidence in China: MFA

The epidemic has not affected the determination and confidence of foreign companies to invest and operate in China, said the spokesman of the Ministry of Foreign Affairs (MFA) on Wednesday. 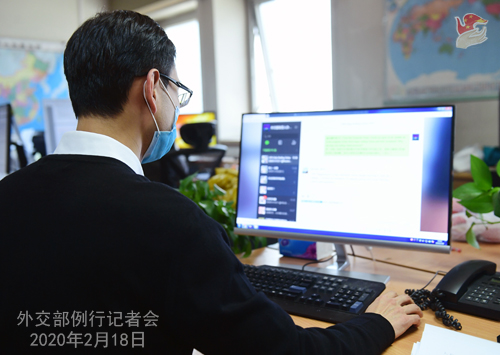 Geng Shuang made the remarks during a routine online MFA press briefing in response to a survey conducted by the American Chamber of Commerce in Shanghai showed that one-third of the companies surveyed are considering relocating their business outside China.

Geng stressed that the National Development and Reform Commission and other departments had discussed the impact of the epidemic on China's economy. Generally, the impact is only temporary and China is confident in fulfilling its planned economic and social development goals.

The Chinese government has enough policy space and room for maneuver to boost the economy. The economic fundamentals that support China's long-term growth will remain unchanged.

"At the same time, we are also actively supporting and promoting the resumption of production and work of companies and institutions, including foreign-funded companies," Geng added.

Relevant Chinese departments are coordinating to solve the practical problems encountered by foreign companies in investment, production and operation in a targeted manner to minimize the impact of the epidemic.

"I would like to point out in particular that many foreign companies, including US companies, have stated recently that they believe China will soon overcome difficulties and continue to maintain a healthy and stable economic development," he said.

Geng stressed that the head of Honeywell China, a well-known American manufacturing company, said that the company's 18 factories in China have fully resumed work and another 3 have partially resumed work. The head of Ford China also said that China's huge market's rigid demand is still there, and Ford is confident in China's future development.

"The views of these American companies are very representative," he said. "We thank foreign companies for their understanding and support for China's fight against the epidemic, and appreciate their confidence in the prospects for China's economic development."

"Helping China is helping the world," said Geng, adding that the urgent task for everyone is to defeat the virus together and restore normal state-to-state exchange and cooperation as soon as possible.