BEIJING, Feb. 21 (Xinhua) -- The ongoing novel coronavirus outbreak is likely to strain China's trade growth in the first quarter of this year, but its impact is manageable, a commerce official said Friday. 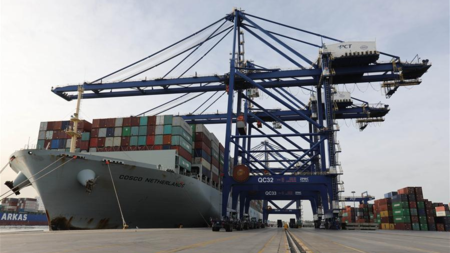 Trade growth in the first two months of 2020 might slide due to disrupted logistics and delay of business activities, Li Xingqian, director of the Ministry of Commerce (MOC)'s foreign trade department, told an online press conference.

The MOC has rolled out an array of policies to help trade enterprises resume business and deliver orders, with more targeted aid expected to follow.

Li said the trade sector is picking up pace in recovery. Trade firms across the country are in steady operation resumption, with those in the eastern coastal areas reporting faster progress than their central and western counterparts.

"Based on our monitoring, there won't be massive lay-offs in the trade sector," Li added.

Li said preparation for the 127th China Import and Export Fair, slated to open in April, is in the pipeline. Also known as the Canton Fair, the event is held every spring and autumn in southern China's trade hub of Guangzhou and widely seen as a barometer of China's foreign trade.

"We have the confidence to stay moderately upbeat on the whole year's trade growth, which is expected to be within a reasonable range," Li said, citing generally stable global demand and solid domestic trade industry fundamentals.