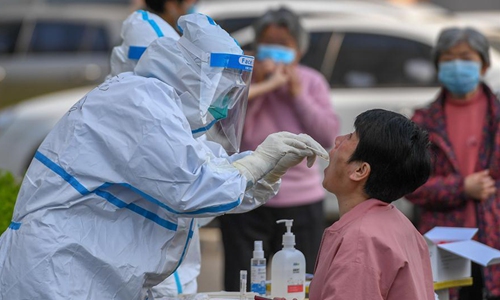 A member of a medical team sent to support Jilin city, Northeast China's Jilin Province said that there are abundant medical resources to handle the current epidemic, and experiences gained in severely COVID-19 hit regions would be useful to guide work in the city, where two new locally transmitted cases were reported on Monday.

According to the Jilin provincial health commission, one of the two new confirmed cases discovered on Sunday came from Shulan, a city under the administration of Jilin. That individual is believed to be "patient zero" in this outbreak.

So far, three districts in Jilin city have been affected by COVID-19, as the other patient identified on Sunday was from Changyi district.

Liu Qi, head of the 12-member medical team from The First Hospital of China Medical University in Shenyang, Northeast China's Liaoning Province that arrived in Jilin on Thursday, told the Global Times on Monday that their experiences in the most-effected regions will be very useful in guiding their work in Jilin.

Liu's team is responsible for conducting CT imaging analysis for the confirmed COVID-19 patients at a local designated hospital in Jilin, which has 22 patients in treatment.

"Medical treatment for the confirmed patients in the city is going well, with everything under control," he noted.

Both of the two new patients in the city were related to previous cases in Shulan and Fengman district, which are the only two regions designated as high-risk in China now.

However, Wang Peiyu, a deputy head of Peking University's School of Public Health, noted that it is not necessary to test everyone as the epidemic in Jilin is still controllable.

"The new cases are all on the contact chains of previous cases, so just keeping close track of the key personnel and enlarging the testing scope of places with infection risks, such as hospitals and public transportation, should be adequate for the current epidemic control work," he told the Global Times on Monday.

Yang Limin, a deputy secretary-general of the Jilin city government, said at Sunday's press conference that the city has stepped up testing and detection work on key personnel, with more than 40,000 nucleic acid samples having been submitted.

Jilin had recorded 34 local cases as of Monday since May 7, including 19 from Shulan and 12 from Fengman district.

Shulan issued a notice on Monday announcing it would implement "strictest measures" for its COVID-19 prevention and control work, effective Monday noon.

Communities with confirmed and suspected cases will be under sealed-off management, and no one will be allowed to enter or leave in principle. Daily basic materials will be delivered, said the notice.