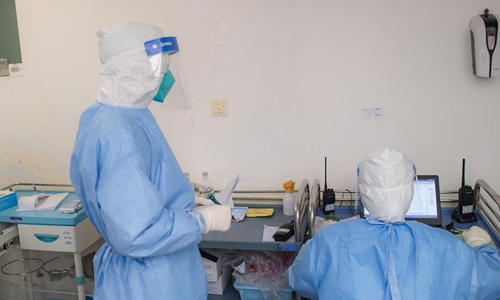 The Chinese people have just experienced an unforgettable Spring Festival as the whole country has been forced to endure the spread of the novel coronavirus, which has resulted in more than 170 deaths and 8,152 confirmed cases in all of the Chinese mainland's 31 provinces, autonomous regions and municipalities.

Chinese experts forecast that now with the approach of the end-of-holiday travel rush, the focus of the nationwide battle may shift from Wuhan to first-tier cities Beijing, Shanghai, Guangzhou and Shenzhen.

It has been a tough week for Wuhan, capital of Central China's Hubei Province and the epicenter of the deadly novel coronavirus.

With the abrupt lockdown of the city on January 23 - the first such quarantine of its kind in the history of the People's Republic of China - some residents have expressed fears at a steadily worsening situation involving the separation of families and shortages of daily necessities.

But authorities insist that the lockdown, at a cost to the local economy, will help contain the spread of the virus. The message has gone out in support of Wuhan and Hubei making this considerable sacrifice for the whole country.

Meanwhile, the Chinese central government has launched a national campaign to counter the spread of the disease.

All governments in provinces, autonomous regions and municipalities had implemented "Level I" public health emergency response measures as of Wednesday night.

The number of new cases Tuesday suggested a possible slowdown in the daily rate of infection, prompting Chinese experts to speculate on a turning point.

Significant progress in containing the virus could be "expected soon" said Zeng Guang, chief epidemiologist with the Chinese Center for Disease Control and Prevention (CDC).

As the holiday return travel rush begins, cities including Beijing, Shanghai and Guangzhou remain on high alert to try to contain the spread of the infectious disease amid a massive global human migration.

The State Council has extended the Spring Festival holidays from Thursday to February 2 as part of its efforts to delay the travel peak in line with expert knowledge that the incubation period of the virus is about 10 to 14 days.

It was too early to say when the epidemic would reach a turning point, said Zhou Zijun, a professor at the Peking University school of public health, but he remained cautiously optimistic about Hubei's future path.

Cities nationwide stepped up their preparations to prevent a potential outbreak.

Beijing mobilized residents to participate in an "inch-to-inch community search" and to report people coming from provinces with a high rate of coronavirus infection.

Beijing's Xiaotangshan Hospital, which became famous as a dedicated hospital for SARS patients in 2003, is being refurbished and expected to reopen for the medics to move in.

Chinese experts noted that since the lockdown of Wuhan, the whole country has been mobilizing itself from central government to local authorities to basic communities.

Thousands of medical staff from all over the country have been flying to Wuhan during the Spring Festival holidays to join the frontline battle against the virus. They included military medical staff who arrived at the city on Chinese New Year's Eve on January 24.

Companies, individuals and institutions have also been raising funds and donating supplies to support the city and Hubei.

The Ministry of Finance said Thursday that 27.3 billion yuan ($3.9 billion) has been allocated to support the nationwide battle and health staff would receive a subsidy of 300 yuan ($43) a day.

China's aviation authority said 86 flights to Wuhan had delivered "115,000 pieces of materials and 5,129 medical personnel" for the battle against the virus as of Wednesday.

Some international media and social media reports have portrayed Wuhan as a ghost town, but the city's community workers, cleaners, nurses, retailers and taxi drivers have been working hard to help the city retain basic operation and return to normal.

"When authorities announced the lockdown, nobody was well prepared, which of course made us panic," a Wuhan resident surnamed Huang told the Global Times on Tuesday. "Now the whole country is cheering us up, giving us much support, and we believe we could get through this."

State broadcasters have been airing nonstop special coverage of the battle against pneumonia in the past week, popularizing general health knowledge and offering prevention tips.

China deserves the international community's gratitude and respect for having taken serious measures to contain the outbreak and trying to prevent the export of more cases overseas, said Tedros Adhanom Ghebreyesus, director-general of the World Health Organization (WHO), according to a statement the WHO sent to the Global Times on Wednesday.

Ghebreyesus was quoted as saying he appreciated the seriousness with which China was approaching the outbreak, especially the commitment from top government leadership.

Chinese experts said China's efforts at containing the deadly virus would continue to be recognized by the international community and they forecast significant results will show up soon as the country steps up its efforts to contain the disease at community level and authorities at different levels launch measures to contain the spreading infection.

The authorities at the basic level of Chinese society have designated officials to monitor the physical condition and arranging psychological counseling for residents returning from Wuhan.

In Geneva, the Emergency Committee on the novel coronavirus (2019-nCoV) under the International Health Regulations was scheduled to reconvene 8:30 pm Thursday Beijing time and advise Ghebreyesus on whether the outbreak constitutes a public health emergency of international concern.

Whether or not the WHO should declare a global emergency mostly depended on the virus' death rate and contagiousness, Zhou said. The death rate for the novel coronavirus was comparatively lower than SARS, Zhou believed, meaning in his opinion the WHO was unlikely to declare an emergency.

Even if the WHO did declare an emergency, the practical impact would be mostly economic as travel between China and other countries and regions would be suspended.

More than 7,700 confirmed cases have been reported globally with "only 68 outside China," Wu Zunyou, head of CDC AIDS and HIV prevention, told a press conference in Beijing on Thursday.

The figures indicated that China's measures to prevent the virus from spreading were "effective," Wu said, noting that "we are confident to control and overcome the epidemic."

This reflected the advantages of a socialist system in unifying forces to overcome difficulties, Chinese experts said, which have occurred in previous natural disasters and major public health crises.