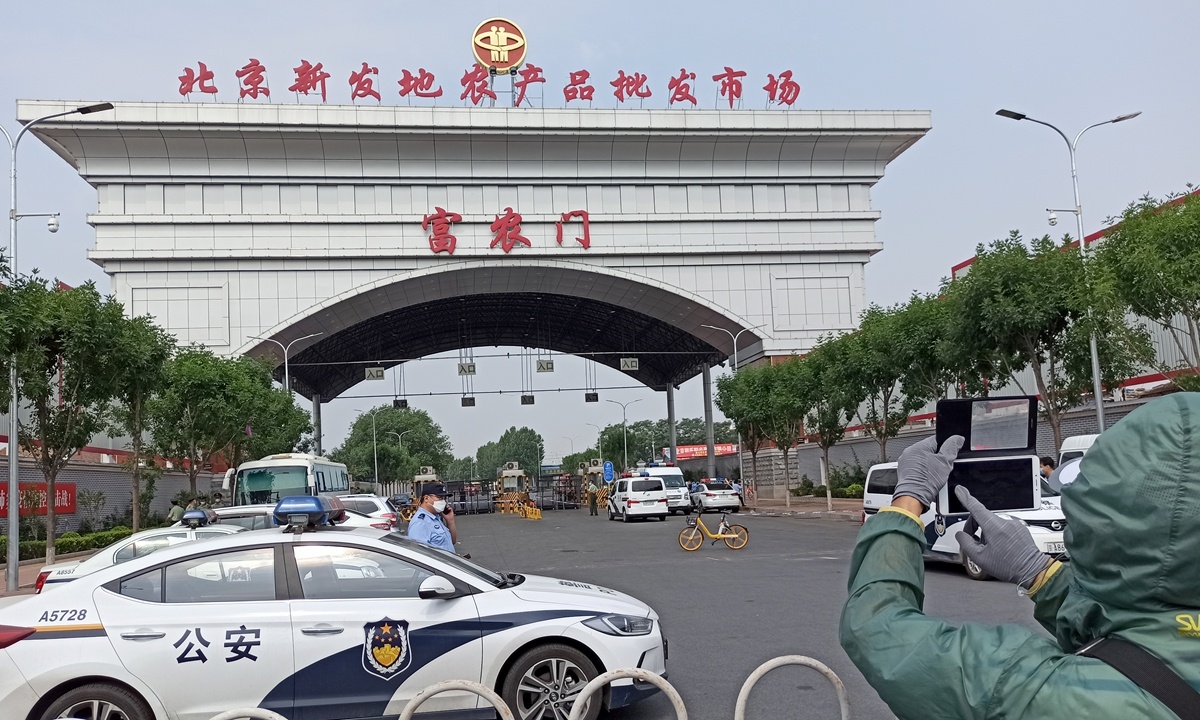 The Xinfadi market in southern Beijing was shut down on Saturday. (Photo: cnsphoto)

The latest batch of confirmed and asymptomatic COVID-19 cases in North China's Tianjin Municipality, among which the earliest reported ones had been proven to be connected with exposure to imported cold-chain food, suggests that the coronavirus outbreak in Wuhan may have come from overseas, virologists and public health specialists told the Global Times on Friday.

Epidemiological investigations showed that two of the eight residents who tested positive the earliest are local loaders that have direct contact with cold-chain imports. Tianjin had found coronavirus on several samples of the city's imported cold-storage food earlier this month.

Similar to the patients reported in Beijing's Xinfadi market and East China's Shandong Province from June to July, the cases in Tianjin are probably another example of cold-chain-related infections, based on detailed epidemiological discoveries, said Zhou Zijun, a professor at Peking University's School of Public Health.

"The possibility that the virus found in Wuhan could also have been brought from overseas through cold chains does exist," Zhou told the Global Times on Friday. COVID-19 was reported for the first time in a seafood market in Wuhan, Central China's Hubei Province, at the end of 2019.

Tracking down the recent sporadic cold-chain-related cases across China has proven that COVID-19 can survive and remain infectious to humans in cold-chain conditions, said Yang Zhanqiu, a deputy director of the pathogen biology department at Wuhan University.

"Further tracing of the source of the virus in Wuhan relies on investigations of its genotypes, but the recent Tianjin cases can also provide the tracing work in a possible direction," Yang told the Global Times on Friday.

More studies have shown that the virus may have occurred outside China prior to the Wuhan outbreak. An institute in Italy recently found COVID-19 in blood samples collected in October 2019. Earlier, the US Centers for Disease Control and Prevention (CDC) acknowledged that some local patients diagnosed with the flu last year might have actually had COVID-19.

Wuhan, therefore, might not the place where the coronavirus originated but instead where it was first reported, experts noted.

The quick reporting of COVID-19 in Wuhan in December 2019 was largely due to a monitoring system for unknown pneumonia that China set up since [the SARS outbreak in] 2003, Zeng Guang, chief epidemiologist from China's CDC, said on Thursday.

China's monitoring system and techniques enabled medical workers to find and track COVID-19 in the early stage of transmission in Wuhan, Zhou said. "But that doesn't necessarily mean that Wuhan was the birth place of the virus," he said.

The virus might have even broken out simultaneously at several different places including Wuhan and overseas cities, Yang estimated. "It cannot be ruled out that [virus] came to Wuhan from overseas," he said.

Yang suggested that some countries might have long known about local occurrences of COVID-19 but chose to hold back their information. "I personally knew some US researchers who had canceled a few pathogenic samples for decades in the 1980s," Yang said.

"China, by contrast, publicized the virus' information with a people-concerned government and active medical personnel," he added.

The sporadic cold-chain-related COVID-19 cases in China, including the newly reported patients in Tianjin, have shown that strict examination on frozen imports into China is necessary and scientific, experts said, kicking back some Western media's attacks on the examining scheme as "China purposely making difficulties for imported products."

The pandemic situation in many countries remains serious, said Yang. "Instead of grumbling about China examining its imports, they'd do well to first control their domestic virus transmission and ensure the safety of their products exported to China."