CHINA Eradicating poverty in a land that time forgot

Eradicating poverty in a land that time forgot

Stretching across a vast landscape of mountains and hills to basins and deep valleys, bordering along the fast-flowing Jinsha River, sits the picturesque Liangshan Yi Autonomous Prefecture in Sichuan Province, Southwest China. 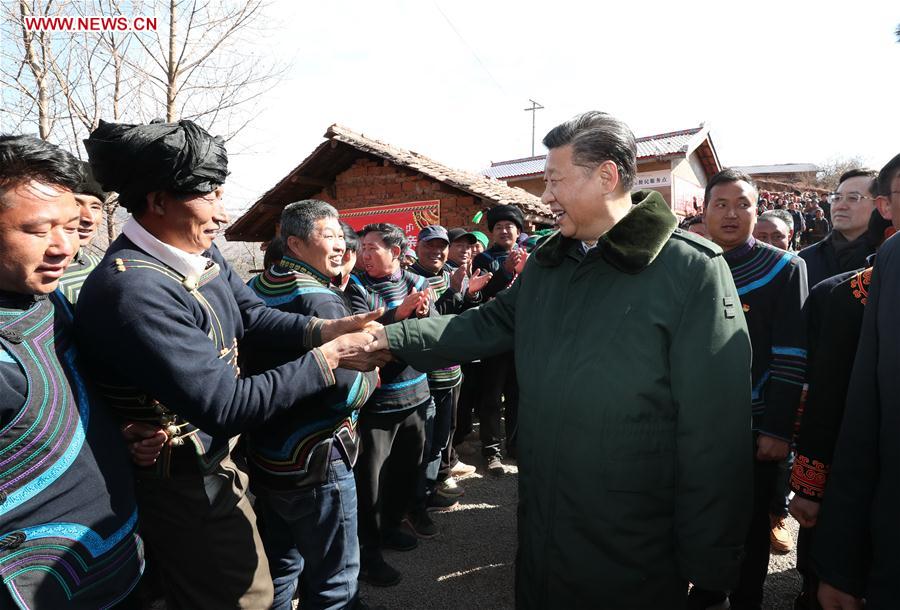 This is an area that has struggled with poverty. President Xi Jinping was deeply concerned with people’s living conditions there after his tour of the Sanhe village last spring.

Youngsters in the village studied hard and dreamed about leaving the backward environment and leading better lives in big cities.

Luogu Youge is one of them. He left his hometown to go to university, but he came back and started a pig-raising business after graduation, which disappointed his mother.

Luo sensed dramatic changes were happening in the village, and wanted to join the mission to make his hometown better after President Xi vowed to improve people's lives.

To Xi’s relief, efforts by the Liangshan government to relieve poverty have been successful, lifting roughly 500,000 people out of poverty during the past five years in the 60,000 square kilometers region.

Luo has grown to be a young star entrepreneur, with hundreds of fans, including his mother.

Liangshan is famous for its organic food and natural environment. It has great appeal to those from surrounding urban areas who wish to lead green lives.

To turn demand into profit, two things are needed: an efficient transportation system and a commerce platform, both of which have been provided by the local government.

Since 2016, the mountainous area has enjoyed a boom of agricultural cooperatives for professionally bred domestic animals. This helps farmers focus on production and profits.

On the other end of the chain, companies in cities sign deals with faraway cooperatives, which help farmers with precise production based on market needs.

"To be a teacher in my hometown is the bravest decision of my life," said Liu Jingui, who quit his high-salary job in Kunming after an impressive experience in Liangshan.

“I was so surprised to find how closed-minded and cloistered those rural children were as I taught a lesson during my wife’s sick leave,” said Liu. “It was then I decided to be a Chinese teacher in Sanhe village and educate children as best I can.”

Chinese, the once-biggest obstacle for kids, gradually became a powerful tool for them to broaden their horizons.

Now every village in Liangshan has its own preschool.

Liangshan, a mysterious land with a well-preserved natural environment and ancient conventions, is hailed by anthropologists worldwide as a living fossil of a former slave society.

Nevertheless, the transformation of its primitive society into a modern one creates confusion among villagers and challenges for poverty relief work.

Wooden furniture donated by the local government was used as firewood as they do not see any differences between furniture and wood.

Washing machines were not used for cleaning clothes, but rather as metal cupboards for storing goods.

Parallel with education, a push by local officials for civilized manners and modern habits has helped locals adapt to a better life.

Animal herds, on which most families depend financially, were conventionally killed as sacrifices during funeral ceremonies, contributing to poverty.

New habits developed, such as sleeping in beds rather than on the ground, bathing, face-washing and taking care of their teeth.