CHINA Erhai lake cleans up its act in pollution fight

Erhai lake cleans up its act in pollution fight

As the Lunar New Year travel rush swept across the country, throngs of tourists headed to the ancient city of Dali in Yunnan province to enjoy stunning views of Erhai Lake and other scenic areas.

Those among them who had visited Dali years ago discovered that the waters of the ear-shaped lake have now become much clearer, and more waterfowl could be seen.

However, they also found it harder to book rooms with views of the lake as many guesthouses, hotels and restaurants have been closed as part of Dali's campaign to curb pollution and improve the environment of Erhai, known as "mother lake" by locals. 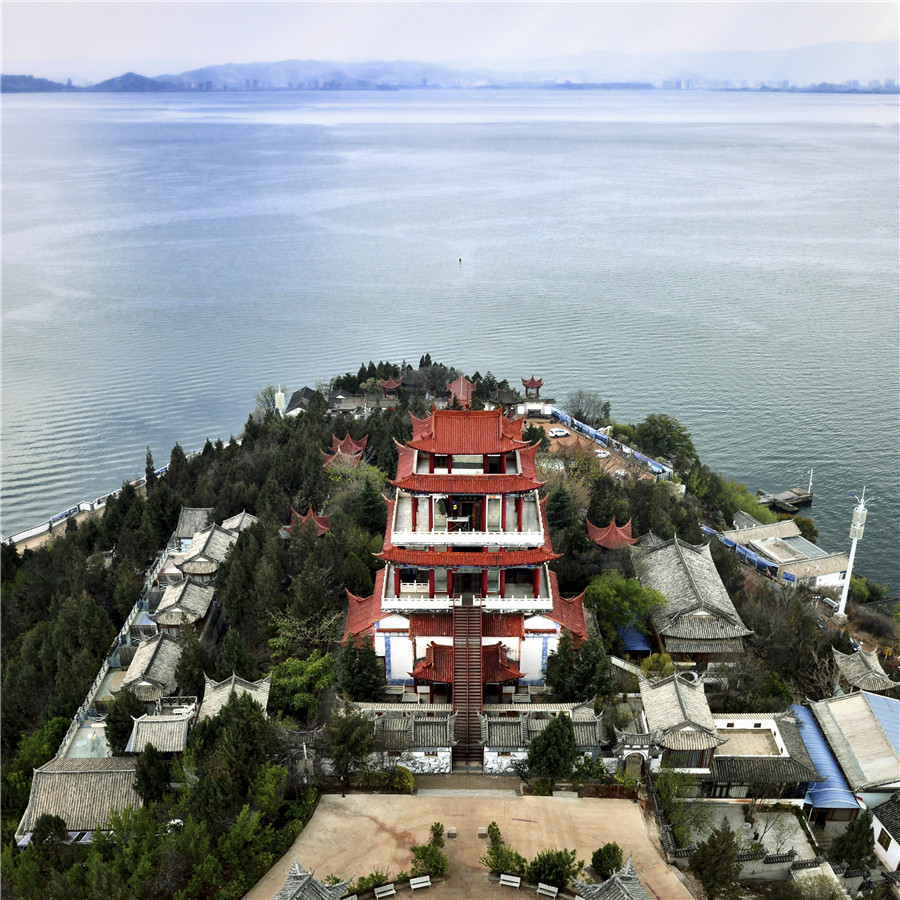 Zheng Cheng, who traveled from Chengdu, capital of neighboring Sichuan province, said he was making his third holiday trip to Dali.

"Compared with my first visit in 2013, Erhai Lake looks cleaner and clearer now even though tourists continue to visit," Zheng said, adding that local environmental protection efforts made at the lake appear to have paid off.

Erhai Lake, which is 1,972 meters above sea level, is one of the largest highland lakes in Yunnan, covering 256 square kilometers. It stretches about 42 kilometers from north to south and is 9 km at its widest stretch. The lake provides a major source of water to 620,000 residents in Dali.

In March 2017, the local government issued a protective management order, the Seven Major Actions, to protect the lakeside environment. Initiatives included demolishing illegal constructions around the lake, and efforts to reduce water pollution.

The campaign was launched as the lake's water quality had worsened in recent years. Three large outbreaks of toxic blue-green algae occurred in the lake in 1996, 2003 and 2013. The number of pollutants in the lake in 2016 had increased by 50 percent compared with 2004, according to the local environmental protection authority.

Li Aichun, a taxi driver who lives in a village near the lake, said he used to swim in it with his brothers in childhood, when the waters were so clear that fish and weeds on the bottom could be seen from the surface, and the water could be drunk. However, the situation today had changed due to increasing pollution, the 43-year-old said.

The reduction in water quality alarmed both the central and local governments. In January 2015, during an inspection tour of Yunnan, President Xi Jinping, who is also general secretary of the Communist Party of China Central Committee, visited a village near the lake and called on residents and the local government to protect it, emphasizing that this is a long-term task.

During his tour, Xi had a photo taken with local officials beside the lake and said he hoped that the water quality could be improved when he made his next trip.

Xi's instructions on environmental protection of the lake came after nationwide efforts were stepped up in 2012 to build an "ecological civilization" to ensure that by 2035 there would be a fundamental improvement in the quality of the environment, and the goal of building a Beautiful China would be basically attained.

Zhang Yong, who was vice-governor of Dali City in charge of environmental protection in 2015, said, "General Secretary Xi told us that Yunnan should take the lead in building an ecological civilization."

Xi's comments that "lucid waters and lush mountains are invaluable assets" as well as "ensuring harmony between humans and nature" have become a guiding principle for the environmental management of Erhai Lake, Zhang said.

Environmental experts said pollution of the lake can be partly attributed to a change in the ecology of the organisms in the water, but mostly stems from excessive exploitation by the tourism and real estate industries.

Wang Shengrui, a member of the Erhai Lake Protection Expert Committee and professor at Beijing Normal University's College of Water Sciences, was quoted by Global Times as saying the abundance of sunlight and relatively high temperatures mean that the lake is especially susceptible to toxic blue-green algae blooms.

Known as the Pearl of the Plateau for its beautiful scenery that can be viewed all year, Erhai Lake is a must-see attraction for tourists of all ages and backgrounds.

Since 2010, many middle-income earners, attracted by the lake's scenery, have quit their jobs in big cities, moved to Dali and entered the guesthouse business by leasing lakeside land from local farmers and building their own premises.

In recent years the lake's once sleepy waterside towns and villages have turned into teeming tourist spots, with every building purporting to boast lakeside views being transformed into a guesthouse, a restaurant－or both.

In particular, a few years ago Shuanglang was a small town where it was hard to find accommodations and anything to eat after dark. Now, it has been become Yunnan's new "must-see" destination, boasting more than 600 guesthouses and restaurants in a 1-sq-km area.

While the villagers cashed in, it was mostly outsiders who brought the capital and the tourist expertise to open nearly 2,000 lakeside hotels, guesthouses and restaurants. But they often started operating without a complete set of the permits required.

With the tourism industry expanding rapidly in the city, wastewater and garbage were often found being disposed of directly into the lake due to insufficient or dilapidated facilities on the shore.

The exact number of tourists traveling to Dali during this year's seven-day Lunar New Year holiday, which ended on Sunday, is not yet known, but the figure for last year was 1.72 million. 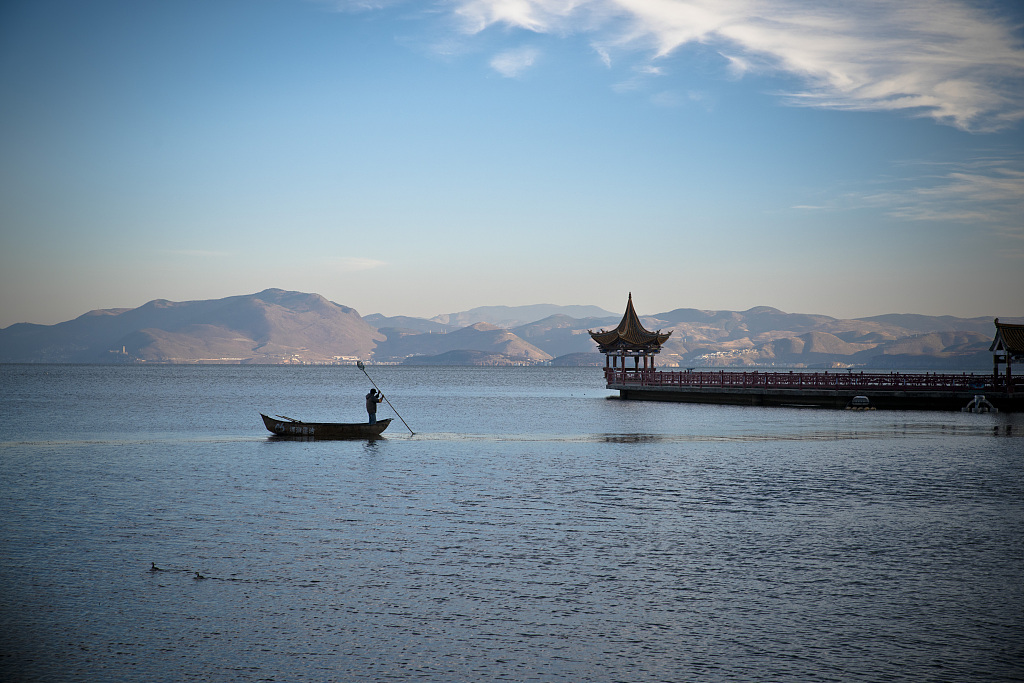 Yang Fuquan, a senior researcher at the Yunnan Academy of Social Sciences, said the discharges from the massive hotels and other buildings were a major source of pollution in Erhai Lake.

In 2017, all the 2,400-plus lakeside hotels, guesthouses and restaurants were told by the government to close. They are not allowed to reopen until the authorities confirm they have all the required permits, and construction of a sewage pipeline running around the lake is completed.

However, the long-existing pollution problems motivated both the Dali and Yunnan governments to take tough punitive action against violators, and pushed them to escalate control measures.

Since October, 1,806 buildings, including some 540 guesthouses, inside the Erhai Lake protection zone, which lies within 15 meters of the shoreline, have been demolished.

Locals have mixed feelings about the crackdown on regulatory violators under the strictest-ever environmental management of the lake by the local government.

Tourist guide Liu Ge, a native of Dali, said he understands and supports the government's efforts in protecting the lakeside environment.

"After all, Erhai Lake is Dali's greatest wealth," Liu said, "If it's polluted, the tourism industry will be undermined. We should look at things in the long term."

The lake is also the major source of water for 620,000 residents in the city and should be well protected, he added.

However, Chen Xiaoxue, who worked as a manager for a lakeside guesthouse before the environmental campaign was launched, said she lost her job due to the demolition of the premises, where she worked for two years.

Her boss, the guesthouse owner, lost an investment of at least $1 million in the operation, she said, adding that many such operators are now heavily in debt.

The Dali government has hired a property evaluation company and offered compensation to each guesthouse operator according to the size of the premises. But some of them believe the money cannot make up for their losses.

Zhang, who led the environmental campaign, said "great pains" are being felt from the rapid economic and social development in Dali City, but they are for the benefit of future generations. Erhai Lake must be protected despite the great pressure now being felt.

Zhang said the problems arising from environmental management will be addressed properly, adding that the move is aimed at the sustainable development of tourism, the city's main industry.

During a two-day national conference on environmental protection in May, President Xi said in a long speech that coordination between economic and social development and ecological civilization must be advanced.

The tone-setting speech was published on Feb 1 in Qiushi Journal, the most influential and authoritative magazine devoted to the CPC Central Committee's policymaking and theoretical studies.

Xi highlighted the fundamental importance of building an ecological civilization for the nation's sustainable development.

With the economy transitioning from high-speed growth to high-quality development, the building of ecological civilization has entered a critical period－which requires more quality environmental goods to meet people's ever-growing demands for a beautiful environment at a time when China is capable of addressing prominent ecological and environmental issues, Xi said.

Noting that a sound ecological system is the "most inclusive benefit" to people's well-being, Xi said an action plan for the prevention and control of water pollution must be advanced to ensure the safety of drinking water.

He said that in pushing forward ecological civilization, the principle must be upheld that mountains, rivers, forests, farmland, lakes and grasslands are a life community.

Zhang said that after Xi's tour of Erhai Lake, the Dali government carried out a series of initiatives to improve the water quality in accordance with the president's instructions.

Strict controls have been implemented within the core area. No new buildings are allowed, apart from environmental and public facilities, and guesthouses and restaurants can only reopen once all permits are in place, he added.

Agriculture in Dali, a major contributor to contamination of Erhai Lake through the excessive use of fertilizer and pesticides, has not been spared from intervention.

The immediate lakeside vicinity has been marked as off-limits to any form of agriculture, while breeding farms have been prohibited in the wider area, with the goal of controlling and reducing animal rearing.

The lakeside's surroundings will be turned into an environmentally friendly agricultural area with the focus on reducing water usage, pollution and land use, Zhang said, adding that farmers are being encouraged to use organic fertilizer.

While stepping up pollution control measures, the Dali government has also promoted raising awareness of environmental protection among locals.

Yang Lian, a 76-year-old farmer from Gusheng village, Wanqiao township, near Erhai Lake, said it is the responsibility of all households and every person to protect the environment.

"We can develop tourism in the village so that both the environment and people's lives can be improved," Yang said.

According to the provincial environmental monitoring authority, the quality of water in Erhai Lake was much better last year. There were seven months when the quality rose to Grade II－the second-highest－which means the water can be drunk after treatment. It was the first time the lake had achieved this level since 2015.

Yang said: "If Erhai is clean, Dali is prosperous. We believe that."