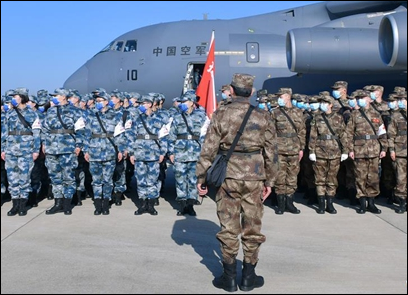 A permanent national defense force on biosecurity should be established and led by China's military, as the novel coronavirus pneumonia (COVID-19) outbreak shows that China is not fully prepared to efficiently deal with a biological disaster or even potential warfare, which can have as great an impact as a conventional regional war, Chinese experts said on Monday.

The military, temporarily mobilized and assembled, has already shown its capacity to tackle the ongoing COVID-19 outbreak threat through its efforts, the experts said.

Wu Qian, a spokesperson at the Ministry of National Defense, declined to directly comment on the experts' opinions, but he said at a Monday press conference held by the State Council Information Office that the COVID-19 epidemic highlights the importance of biosecurity, and strengthening national biosecurity is a common practice among international society.

Military expert Peng Guangqian said in a February article that biological threats are a new type of warfare, which may come from biomutation or a vicious enemy. The threat may not feature a declaration of war or a concrete battlefield and may not distinguish between military and civilian personnel.

This epidemic shows China is not fully ready, and that it should have a strategic plan on national biosecurity, like building a national defense force on biosecurity directly led by the Central Military Commission, Peng said.

Wang Peng, an associate research fellow at the Chongyang Institute for Financial Studies at the Renmin University of China, told the Global Times that a major infectious disease can have as great an impact on Chinese politics, economy and society as a regional war, as shown in the COVID-19 outbreak, so building a permanent force dedicated to dealing with these potential threats is necessary.

China will also draft a biosecurity law at the earliest opportunity and establish a legal and systematic support system to secure national biosecurity, Wu noted.

Establishing a dedicated military unit is viable because China's armed forces have shown how capable they are in dealing with COVID-19, and in doing so, have won wide trust and respect among the Chinese people, Wang said. He noted that China had established a military unit focused on public health in 2006 but was not able to develop it into a larger force, however, China could now expand on this previous experience.

When no imminent biological threat is present in China, this force can also conduct and participate in humanitarian aid missions in foreign countries and regions, which will not only enhance the force's capabilities, but also boost China's international leadership and participation in global governance, Wang said.

Peng told the Global Times on Monday that other flexible solutions like building a dedicated institution or a special unit that is not necessarily a new military branch are also viable, as long as biosecurity is effectively included in China's national security system.