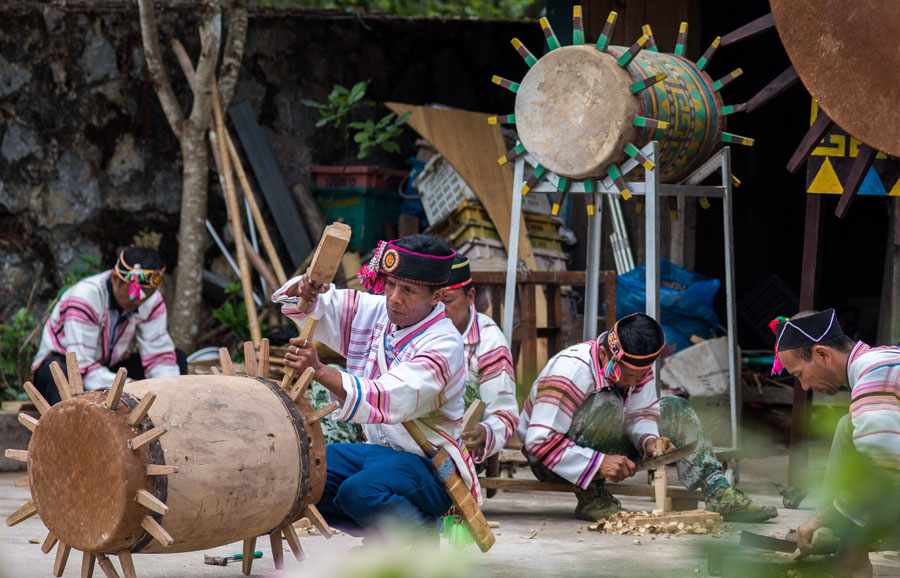 KUNMING - There is a knife hanging on the wall of Zhe Sao's home. It used to be a hunting tool passed down by his ancestors, but now it has become a decoration reminding him of hard times in the past.

Living in Xiaopuxi village in Yunnan province, Zhe is a Jino, the last minority ethnic group-and 56th-officially recognized in 1979.

"My grandpa was born in a primitive society, and both my father and I experienced the days of slash-and-burn farming," said Zhe.

With a population of around 23,000, most Jino live in a township on Jino Mountain in Xishuangbanna Dai autonomous prefecture.

The township is located on a tea mountain. Elders told Zhe that there was a severe shortage of commodities before the founding of the People's Republic of China in 1949. "You could only get an embroidery needle in exchange for 50 kg of tea at that time."

Zhe, as well as the Jino, have long suffered poverty due to geographic isolation and poor transportation.

A cooking pot, frying pan, kettle and three bowls, "that's all I had," he said.

The rest of the villagers in Xiaopuxi were as poor as Zhe. The 15 households in the township faced food shortages, and children had no access to schools.

Thanks to a series of targeted poverty alleviation policies, Zhe's township and the Jino minority have undergone great changes. More villagers started to accept the commodity economy and walked out of the mountain to integrate into modern society.

As Jino Mountain was one of the six ancient tea mountains where Pu'er tea originated, Zhe cast his eyes toward the tea business.

He helped villagers and encouraged them to join his tea business, teaching them to make tea and manage tea trees, which ultimately increased their incomes.

With the help of the local government, more roads have been built linking the outside world. Tap water and other modern facilities, as well as vocational training, have been introduced to the township.

Tea has now become the pillar industry in Xiaopuxi, which is no longer a small and poor place but a renowned tea production base. The tea produced in Jino Mountain township has been sold to the US, Japan and South Korea.

Zhe said he is considering installing monitoring equipment on old tea trees so that his clients can monitor the trees in real time.

"I do business through my smartphone," said Zhe.

Early in April, the government announced that Jino had been officially lifted out of poverty, together with two other ethnic groups-the Dulong and De'ang.

The per capita net income of township residents also grew from 107 yuan in 1978 to more than 11,700 yuan at the end of 2018, according to Wang Chao, Party chief of the township.

During a recent symposium held in Xishuangbanna to commemorate the 40th anniversary of the recognition of the minority of Jino, the Belt and Road and the China-Laos railway were hot topics, along with poverty alleviation and rural vitalization.

"Local residents are expecting more visitors as a section of the China-Laos railway will open by the end of next year and the station is near the township," said Wang, adding that residents could benefit from the development of tourism in the near future.