President Xi Jinping made an inspection tour in Southwest China's Yunnan Province from Sunday to Tuesday. During his tour, Xi traveled to Simola Wa Village in the city of Tengchong to learn about local poverty alleviation efforts, congratulating local villagers on shaking off poverty. 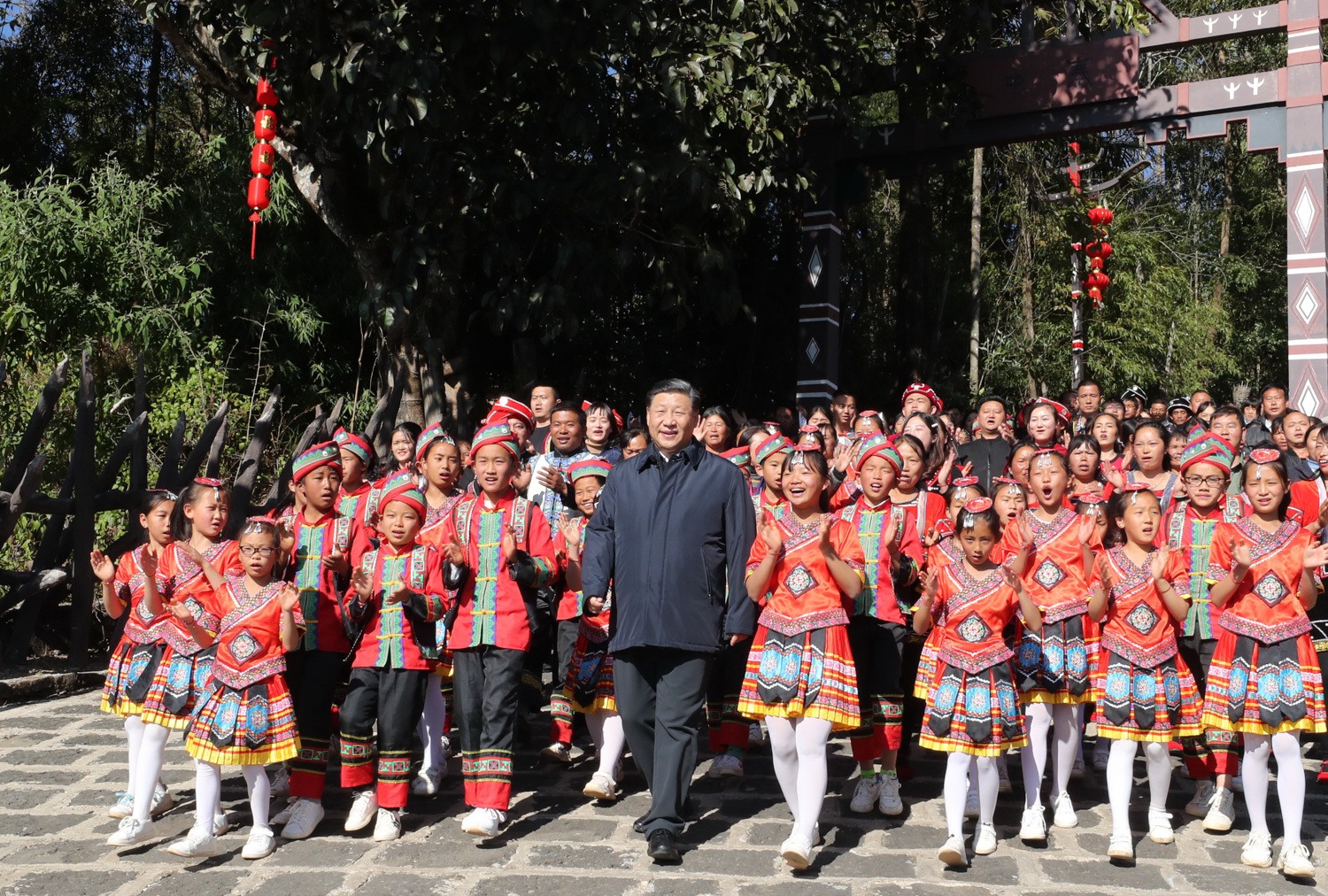 President Xi Jinping went to a village of the Wa ethnic group in Qingshui Township of the city of Tengchong Sunday afternoon to learn about poverty alleviation efforts. (Photo: Xinhua)

When the People's Republic of China (PRC) was founded in 1949, ethnic groups in Yunnan like the Derung and Wa still lived an insulated and primitive life. Surrounded by mountains and waters, they were cut off from the outside world and remained impoverished and lived behind the times.

In 1954, China implemented a new policy to help domestic ethnic groups transition from a primitive lifestyle to modern socialism. The move marked a significant change that would have taken centuries to accomplish in other countries.

The ethnic groups in Yunnan that have completed their transitions include Jingpo, Deang, Jino, Bulang, Wa, Lahu, Lisu, Dulong, and Nu.

However, they encountered problems during rural vitalization efforts. Alleviating poverty is still the hardest struggle in the country’s push for rural development.

In addressing such problems, the province has introduced policies specifically aimed at poverty alleviation for nine ethnic groups.

Beginning in 2018, about 510,000 ethnic people were lifted out of poverty, accounting for over 70 percent of the poverty-stricken population.

In the Simola Wa village, which Xi visited on Sunday, 71 people in 16 households that had been registered as “poor” were lifted out of poverty.

The villagers have experienced an increasing "sense of happiness.” It is estimated that their per capita income will reach 11,448 yuan ($1,667) for 2019.

The Dulong ethnic group is another example of getting out of poverty.

By the end of 2018, villagers in Dulongjiang were earning a per capita net income of 6,122 yuan ($891), had secure housing, 100 percent school enrollment among all children, 4G network coverage, and full access to radio and television. The Dulong were the first to be lifted out of poverty as an entire group.

From saying goodbye to a primitive lifestyle to getting out of poverty, the Dulong made two significant leaps in 70 years.

On April 10, 2019, Xi answered a letter from the Dulong in Dulongjiang, congratulating them on shaking off poverty.

"This vividly demonstrates that people's dream to live a happy life will surely come true with the strong leadership of the Party and the concerted efforts of the broad masses of the people," Xi said in the letter.

The Dulong are not the only ethnic group to end poverty. In the first six months of 2019, Yunnan provincial officials announced that the Deang and Jino ethnic groups had been officially lifted out of poverty, thus achieving historic leaps.