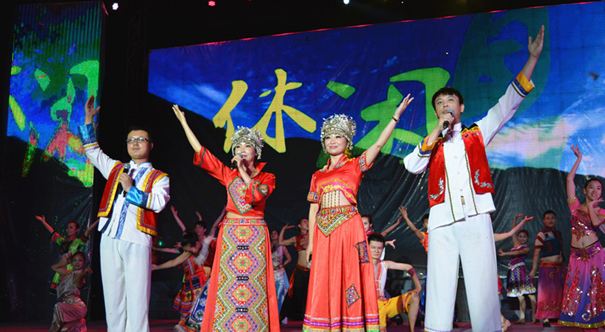 It may not seem like a theme typical of the average folk songs, but the spirit of the 19th National Congress of the Communist Party of China (CPC) is now being included in China's ethnic minority folk music lyrics.
"Luoer Tune" is a folk song genre originating from the Tujia People, an ethnic minority based in southwest China's Chongqing Municipality. Eager to spread the Party spirit, the Tujia are embracing the 19th National Congress in their music.
"Jubilance for Sunrise" is a classic Luoer Tune, a folk style recognized as a top state-level intangible cultural heritage in 2006. The style has been widely sung nationwide and sometimes even outside China.
Xinyu Community Chorus has attracted a wide audience since it started singing an updated version of "Jubilance for Sunrise." The chorus recently sang a new version of the song with lyrics focusing on the content of the report delivered at the 19th National Congress, with dozens of the audience joining in at a performance in Hongjing Community.
The song now reflects many congress buzzwords, such as "rural revitalization," "moderately prosperous society," and "never forget why you started." Promoting the spirit of the congress in China can be difficult due to the many different ethnic groups with diverse customs and living standards. There are still a large number of people in rural areas who are illiterate, so they need the right style of publicity to suit their needs.
Nanping Village in Xituo Township of Shizhu still has 302 villagers living in poverty. There are no enough cement roads in the village, and some villagers even have no water supply in their homes.
But a civil chorus came to the village in November to sing the new version of the folk song and bring the fresh spirit of the 19th CPC National Congress.
Villager Tan Yongcheng fondly remembers many of the lyrics, about "muddy roads in the village," "caring about villagers suffering from sicknesses," and "ensuring rural children's education and the village water supply."
"I like the new version," says Tan, who has suffered poverty and illness for many years. "This kind of publicity is enlightening and straightforward."
"People in this county are familiar with folk music. More than 40 versions have been created based on local folk songs since the commencement of the 19th CPC National Congress," says WangQiongying, head of the county publicity department. "The lyrics express the detailed policies of the congress, such as poverty alleviation, the minimum living allowance and road maintenance. Those are all things that ordinary people care about. It is also a new way of publicity, different from the dogmatic formalist publicity of the past."
Even those working for government culture departments and enterprises have joined the publicity sing-alongs alongside civil performers.
"The lyrics are rewritten by Party committees so as to ensure they are precise," says Ran Longyu, who is in charge of Hongteng Troupe. "We use dialects to sing and perform, bringing contents of the congress down to earth."
Folk music is just one of the many styles used to encourage the spirit of the 19th National Congress nationwide. There are also activities on boats in southwest Guangxi Zhuang Autonomous Region, targeting people living near reservoirs who have difficultyreceiving outside information.
In yurts in northern China's Inner Mongolia Autonomous Region, the local goverment has publicized the spirit of the congress using Ulger, a traditional folk music.