Brussels (People's Daily) - “Cooperation is a mainstay of China-Europe relations,” Chinese State Councilor and Foreign Minister Wang Yi told reporters in Brussels on Monday. “In the past, the present and the future, it will always be the same.” 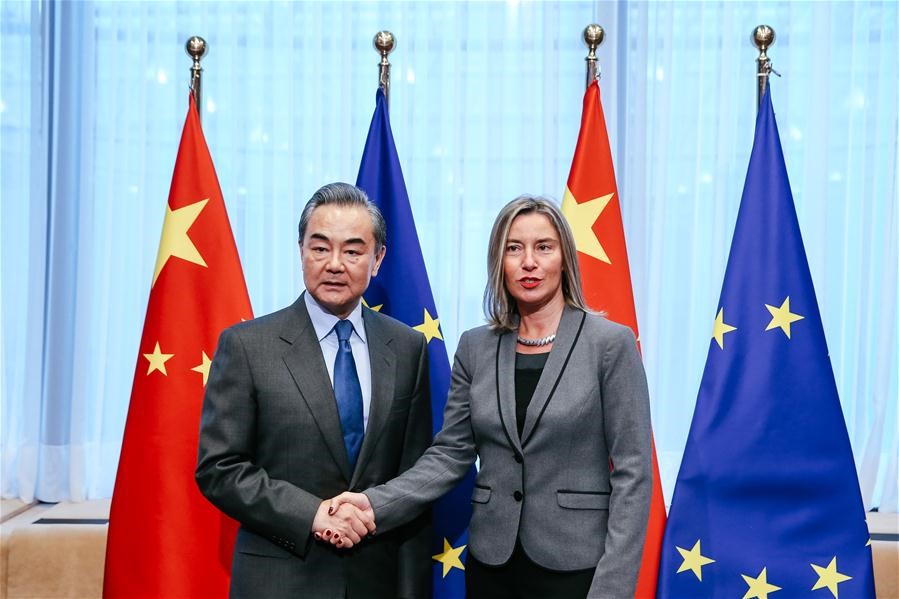 On Monday, Wang Yi and EU High Representative for Foreign Affairs and Security Policy Federica Mogherini co-chaired the ninth round of the China-EU High-level Strategic Dialogue in Brussels, which underlined the need to strengthen the bilateral partnership.

The level and scale of bilateral cooperation are at a historic high, and there is still great potential, said Wang during a joint press conference with the EU’s top diplomat. The common ground is to appreciate the development of bilateral relations, although the two have differences on some issues.

Wang Yi expressed the hope that Chinese companies could be treated in a fair, just and non-discriminatory way in Europe.“What we oppose are groundless accusations for political purposes and attempts to bring down a foreign company,” he said after talks with Mogherini, before meeting EU foreign ministers in Brussels.

Mogherini said EU-China relations have reached a new high in the past five years in terms of their depth and extent. The two share a common stance and goals against unilateralism and protectionism, and both support the international order established around the United Nations.

She said the bloc was “committed to strengthening co-operation with China” as a “comprehensive strategic partner,” although she acknowledged the association was not straightforward. “It’s indeed not a black and white picture...It’s a complicated picture of a very intense, very deep and very broad relationship that defines different areas and different approaches in a way that’s always constructive.”

For the first time, the Chinese foreign minister met the foreign ministers of the 28 EU members on Monday, and they discussed strengthening the EU-China cooperation. The EU regards China as its important strategic partner, not only economically but also politically, Mogherini noted.