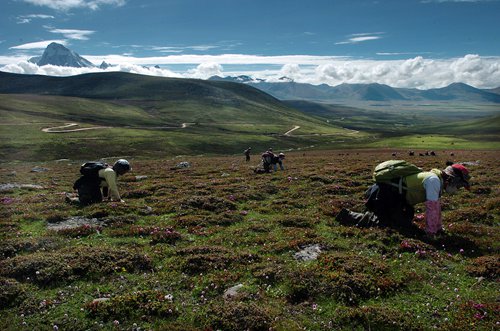 During caterpillar fungus season, the streets of Zaduo village in the mountains of Qinghai Province are deserted. Shops and restaurants are closed, schools are on holiday, and contract government staff are out of the office.

Everyone is in the mountains collecting the rare fungus.

The streets are patrolled by several police vehicles, on guard for outsiders coming to poach the precious ingredient used in Tibetan traditional medicine. In the past, feuds between villagers fighting over the precious commodity have turned deadly.

The fungus is valued as an aphrodisiac and cure for many ailments in traditional medicine, including tumors and aging, although there are no scientific studies to back this up.

It grows in the Himalaya region above 3,000 meters and on the Tibetan Plateau.

Since the late 1990s, the price of caterpillar fungus has surged, reaching more than 100,000 yuan ($15,065) per kilogram, making it more valuable than gold. Each time it passes hands from villager to several middlemen to retail stores, its price jumps.

About 20 percent of herdsmen's income came from caterpillar fungus before 1997. But since 2000, the fungus has made up the major source of income for local households.

For some, it is the only source of income.

The profit has driven local people to collect the fungus to the extent that it has damaged the local ecosystem and, from time to time, sparked deadly feuds between villagers.

On a remote hillside pasture 10 kilometers away from the village in Zaduo county, a small group of men can be seen searching for the fungus, which infects and kills caterpillars then sprouts out of their heads.

Tsering Tumco, 24, has found only 30 caterpillar fungus after hours of digging.

He estimates he can sell them for about 1,200 yuan according to this year's market.

"We come here every morning at 7 and return back to our tent at 8 at night. There is very little fungus this year because of the snow," he said.

Another young man said he could find about 50 everyday, earning him 2,000 yuan a day — a very attractive wage in a province with an average annual income of 19,000 yuan.

While the caterpillar fungus has led to profits for locals, it also attracts outsiders, leading to conflict.

In the worst example of violence, thousands came from a nearby village in 2005, and were intercepted by local people. One person was killed, and many were injured.

A local official said rules were issued to prevent such accidents from happening.

People from outside of the county are not allowed to dig caterpillar fungus.

Local people who dwell out of the caterpillar fungus-producing region must pay a 1,200 yuan collection fee.

The elderly and children can pay less based on their health condition, said the official.

To prevent excessive collection and damage to the environment, the local government only allows people to collect caterpillar fungus between May 15 and June 30.

According to local Buddhist traditions, collection is prohibited on the 10th, 15th and 30th of each month. On those days, villagers clean up litter instead.

To avoid people in other counties from entering Sulu, the local government sets up four major checkpoints and 10 other smaller ones.

Those checkpoints are guarded 24 hours a day.

Though caterpillar fungus has become a key industry for the region, it is becoming increasingly hard to find.

A villager living in Sulu county told the Global Times that 20 years ago, a grownup could find about 200 caterpillar fungus in a day. Now the number is 60 at the most.

The market for the fungus is volatile. Weather affects its quality and quantity.

Scientists say that over time the fungus can only be found at ever increasing altitudes — from 200 to 500 meters higher than 30 years ago.

They predict that the area where it can be found will be reduced by more than 17 percent by 2050.

Local officials pointed out that heavy reliance on the caterpillar fungus is harming the local farming industry.

At the end of 2017, Zaduo county had about 41,000 livestock, including yaks and sheep. That's down from millions in the late 1990s, before the caterpillar fungus boom.

Once a majority of people started collecting caterpillar fungus, extravagance and gambling also became a problem.

Xu Ming, a researcher at the Institute of Geographic Sciences and Natural Resources Research at the Chinese Academy of Sciences, said the caterpillar fungus industry could collapse if the local ecology breaks down, or prices slump. Either situation would be catastrophic for locals.