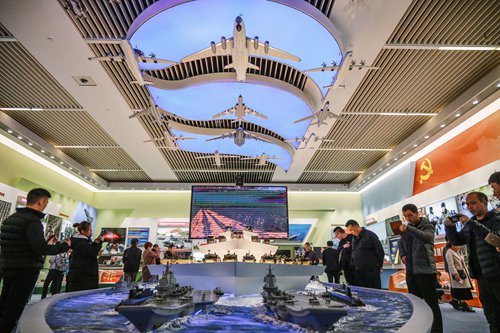 In the National Museum of China at the heart of Beijing, visitors touring an ongoing exhibition often marvel at China's technological feats, enthusiastically taking pictures of models of the space lab and deep-sea explorer on display.

But another section of the exhibition, held to commemorate the 40th anniversary of the country's reform and opening-up, may tell a story of more profound changes in the lives of ordinary Chinese.

The section details how central and local governments took various measures, including investing heavily in poverty-stricken areas, that have lifted an astonishing number of people out of poverty and improved their livelihood.

"This is an extraordinary feat, nothing short of a miracle," said a visitor from eastern Shandong Province.

China is closing in on its ambitious goal of achieving an "all-round well-off society," or a moderately prosperous society in all respects, with GDP and per capita income double those of 2010 by 2020.

The baseline task is to lift all people out of poverty. If the tasks are completed on time, China will meet the United Nations goal of wiping out poverty in all its forms 10 years ahead of the 2030 deadline.

In the exhibition, two books of extracts from the discourses on poverty alleviation by President Xi Jinping are on display.

Since 2012, Xi has put poverty alleviation in a prominent place of state governance, put forward new thinking and new ideas, and made new decisions and plans.

During his inspection tour to the central province of Hunan in November 2013, Xi put forward the policy of targeted poverty alleviation, which has become an important guideline in China's fight against poverty.

Development is the general method to eliminate poverty, and governments in poverty-hit regions should adapt their measures to different conditions and help locals find ways to shake off poverty, he said during the trip.

In recent years, policymakers have listed poverty alleviation as one of China's "three tough battles" for the next three years, along with risk prevention and pollution control.

Financial support has played a leading role in the process. A graphic in the exhibition shows that since 2011, central and provincial governments have spent more than 700 billion yuan on poverty alleviation.

Another method has been dispatching Party cadres to lead the work in poverty-stricken areas. According to official statistic in mid-2017, nearly 1 million people had been sent to needy villages.

The section displays a letter of appreciation written by a six-year-old girl named Zhuo Ya to a sent-down cadre at the time of his departure.

"I am very sad that you are about to leave," reads the letter, which features drawings of the sun, clouds, and musical notes. "You are an excellent village Party chief. Thank you for all the help to our family."