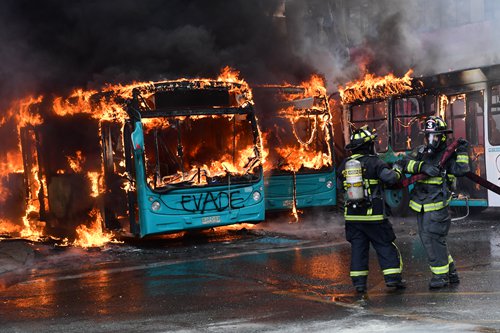 Chilean firefighters extinguish a burning bus during clashes between protesters and police in Santiago, on Saturday. (Photos: AFP)

Chile witnessed the worst unrest in decades over the weekend where people protested against the high cost of living. The Chilean government responded by declaring a state of emergency and imposing a night curfew.

In Santiago, hundreds of troops were deployed on the streets as protesters erected barricades and set buses on fire. Police used tear gas and water cannons to disperse them. More than 300 people were arrested, and 156 police injured, as were 11 civilians, BBC reported. Three people were killed in fire on Sunday in a ransacked supermarket of Santiago during the riot, AFP reported.

Riots also occurred in other cities over the weekend. After a massive protest on Friday, radical protesters in Barcelona turned the city center into war zones in a fifth consecutive night of violence.

The West is to be blamed for expanding violence as riots have been condoned in Hong Kong for months by certain Western elites, Chinese experts said.

Around 7 pm Friday in Barcelona, mask-wearing radicals gathered around places including Gran Via, outside a police headquarters, and Urquinaona square, Catalonia Square, chanting slogans like "Free political prisoners" "Independence, liberty," according to video footages available online. Youngsters also verbally assaulted the police officers, who have become a major target amid recent clashes. When violence escalated, almost all the shops and stores nearby were shut down.

Radical protesters in Barcelona and in Hong Kong share some similar tactics like covering their faces when conducting illegal activities, arson at major traffic junctions and targeting police officers.

However, when police began dispersal work in Barcelona, nearly no reporter would stand between the police and rioters, as the police would arrest those who obstructed their way during the dispersal. But in Hong Kong, crowds of reporters often stand between rioters and police officers and obstruct officers on duty using their arms or cameras.

In contrast with Hong Kong police's restraint in law enforcement, police in Barcelona acted in a fast and decisive manner.

In Western media reports, Hong Kong radical protesters conduct violence for a reason, as they claimed that peaceful protests would not lead to any result. And such a way of illustrating violent protests at the global stage surely inspired other young radicals in different countries, Zhang Yiwu, Peking University professor, told the Global Times.

"Such violent scenes successfully attracted the attention of Western media, which has become a major way to sustain the movement," he said.

Western media, which still has major influence in public discourse, has been playing a negative role of reporting Hong Kong social unrest, and their own bias inspired more radicals in Barcelona and Santiago, who consider peaceful protests useless, and they would reach their goals by ignoring rule of law, he said. "The West will swallow such bitterness," Zhang said.

Pan Deng, executive director of the Ibero-America Law Center of China University of Political Science and Law, believes that the ideology-driven Western media has played a role in manipulating public opinion.

Pan noted that the chaos in places like Hong Kong, Moscow and Caracas has the typical nature of a "color revolution." The Western media and certain Western political forces will push forward the unstable situation in these places.

Robert Manning, a senior fellow at the Brent Scowcroft Center for International Security at the Atlantic Council, said that the social unrest can be attributed to populism. "Populist activism has been on the rise in the US and Europe for several years. In the case of Catalan separatists, they have been in near state of war with Madrid for decades," Manning told the Global Times.

On Friday night, the streets of Barcelona became a total mess. Stones, broken glass and bricks were scattered at almost every junction. Around 10 pm, police began dispersal around the Plaza de Catalunya, firing tear gas, smoke grenades and rubber bullets.

Protesters in Catalonia, like those in Hong Kong, adopt the so-called "Be Water" tactics, which are flexible, fluid and fast-moving during clashes with the police. When police came to disperse the crowd, rioters fled quickly into different streets around the plaza, increasing difficulties for police to arrest them.

Many protesters are students, who called for a referendum for independence and hoped that they could make a difference.

"When we vote, we want to vote in our own way," said Naia, a 15-year-old student who protested on the streets near the Catalonia Square.

Some youngsters said they know what happened in Hong Kong, and they saw some similarities in the way they fight. However, others said they don't really know where the movement is leading them. "I don't really think we'll achieve something, although I hope so," Naia said.

Hong Kong secessionist like Denise Ho praised the protests in Catalonia and told young radicals to "believe in your every action."

"The values and democratic models the West endorses are used to destabilize rival countries, while what is happening now in Catalonia now proves otherwise - such values are inciting locals, especially vulnerable people, and causing disturbance," Pan told the Global Times.