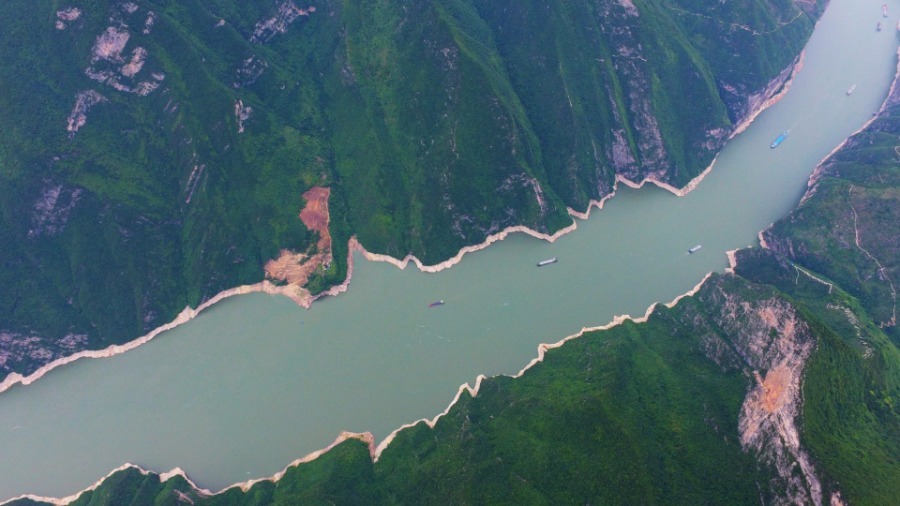 Photo taken on May 23, 2018 shows the scenery of Qutang gorge in Southwest China's Chongqing municipality, May 23, 2018. Qutang is one of the Three Gorges (Qutang, Wuxia and Xiling gorges), which extend for about 200 kilometers on the upper and middle reaches of the Yangtze River, the longest in China. They are a popular tourist destination, known for their natural beauty and historical and cultural relics. (Photo: Xinhua)

As China promotes environmental progress, Meng Fansheng, a water researcher in Beijing, often travels to share his expertise about pollution control and monitoring.

Among his destinations, Xianning, Hubei province, stands out. He spent more than 40 days there last year.

"I visited the city every week or two. Mostly, I went as needs arose," said Meng, who works at the Chinese Research Academy of Environmental Sciences. It wasn't easy for him to find the time, but he was duty-bound to respond.

Meng leads a team dispatched by the Ministry of Ecology and Environment, whose job is to help the city improve the quality of various water bodies in the Yangtze River Basin as the country's central leadership increasingly emphasizes conservation. Xianning is one of 58 cities along the country's longest river, each of which has a designated team working to improve water quality.

Under a mechanism that features both frontline and follow-up research, the teams have tapped more than 5,000 experts from some 300 research institutes, according to the National Joint Research Center for Yangtze River Conservation. The center was established by the ministry in April 2018.

President Xi Jinping has presided over two national conferences about the Yangtze River Economic Belt, in January 2016 and April 2018. At both conferences, he demanded concerted efforts to protect the Yangtze and avoid excessive development.

The dedicated teams, which emerged last year, have been welcomed by local authorities and make it easier to get advice from leading experts, whom governments previously found hard to reach. Steady attention from experts can help crack some hard nuts in a complex and lengthy remediation process, they said.

Zu Wenpu, deputy head of Xianning's municipal ecology and environment bureau, said Meng's team arrived in the city at a time when local officials were racking their brains over what to do to restore the city's major lakes after many strenuous but fruitless efforts.

"We thought the problems would be addressed if sewage could be cut off from the lake," he said. What they found, however, was "no marked improvement in water quality" afterward.

Zu said the local government was handed three plans after environmental companies were invited to make proposals through open bids to address problems. But officials were bewildered. They didn't know which one to choose.

But Meng quickly convened a group of top experts on the environmental treatment of lakes from the country's leading research institutes, including the Nanjing Institute of Geography and Limnology, in Xianning. The experts offered consultations even before the team officially launched its efforts in March.

"Previously, it was hard for us to reach experts. They might agree to come but often were only available after months of waiting," he said. "We also didn't know which experts were authoritative."

Although the experts dismissed the three commercial proposals, which mainly called for the use of chemical agents in the lakes, they brought clarity to the question of how to treat local water bodies－that is, how to restore the ecological system of the lakes by letting nature play a role in remediation.

Allowing nature to restore itself is a principle that's included in the report delivered by Xi at the 19th National Congress of the Communist Party of China in October 2017.

Zu said the local government had planned to roll out a series of projects－for example, one to restore the wetlands of rivers where they empty into lakes, and another to place aquatic plants. Most of these are in the bidding phase.

Meng said that while he couldn't stay in Xianning all the time, he could guarantee that colleagues were always available to address various needs in a timely manner. In addition, he kept himself ready to come any time to convene the experts.

"I concentrate mainly on hydrochemical treatment in my research," he said. "As for lake treatment, I don't know that field well. But I could always turn to a strong talent pool established by the National Joint Research Center for Yangtze River Conservation for help and invite leading experts to contribute their expertise."

Meng's team in Xianning includes experts from the Institute of Hydroecology, which is headquartered in nearby Wuhan, Hubei province, and employees of a local environmental company called Huizhi.

He said the team is expecting to help local researchers improve their research capabilities and raise their competence so they can work independently after the experts leave.