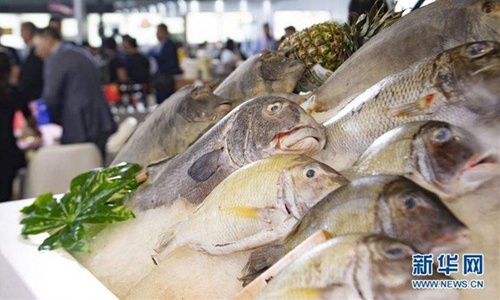 China has seen a continuous rise in cases of contaminated frozen food from overseas and patients of coronavirus infections related to the import industry, which prompted Chinese health experts to suggest an expanded testing scale and a circuit-breaker mechanism for imports like that for international flights.

Shanghai, Tianjin and Inner Mongolia reported 12 new local confirmed infections of coronavirus over the weekend, nine of which were related to airport transport or cold-chain imports.

Shanghai first reported two local confirmed cases in the Pudong New Area on Friday --  a person who works at the cargo terminal at the airport and his wife. The city reported another new domestic case on Saturday, who is  a colleague of the abovementioned airport worker.

Eight people from the Kanhaixuan residential community in a port area in North China's Tianjin Municipality tested positive between November 10 and 20. Epidemiological investigations showed that the first two were local loaders who had direct contacts with cold-chain imports.

These developments prompted some Chinese experts to suggest the establishment of a circuit-breaker mechanism for imported frozen food and a two-month suspension of imports from countries and regions where coronavirus is rampant.

Zhang Boli, a key expert and consultant who fought in Wuhan at the peak of the domestic epidemic, told the media about his suggestion of a circuit-breaker mechanism, Tianjin Daily reported Sunday. "Although the source of the epidemic has not been determined, we need to be vigilant and on guard against the import of cold-chain goods. If this loophole is not closed, the same problem is likely to occur in other places," Zhang said.

Wu Zunyou, the chief epidemiologist at the Chinese Center for Disease Control and Prevention, told the Global Times on Sunday that low temperatures in the winter make the international freight environment similar to a cold chain, creating a "cold chain" effect on all imported goods. The recent surge in cases around the world has increased the risk of contamination from overseas goods.

Imports of "non-cold chain" goods should be managed and controlled strictly, while insisting on sampling and testing of goods and regular screening of related personnel, Wu suggested.

Chinese Customs requires a negative test report and conducts sampling tests and sterilization for cold-chain imports, but it doesn't have the capacity to test everything, Fan Xubing, president of Beijing Seabridge Marketing, a leading shrimp importer, told the Global Times Sunday.

For example, a 40-ton container can hold about 2,000 cold-food boxes. Some three to five boxes from each container may be picked for random inspection, Fan said, noting the customs will expand inspection for frozen food if it detects the virus, but it is impossible to test all shipments.

But customs can increase its efficiency by establishing a grading system and testing more frequently on imports from companies that "have a record," Fan suggested, noting that exporters should also take the responsibility to guarantee their food is safe before shipping it.

Health experts and the food industry insiders are also looking at other measures. A worker in charge of inspecting and disinfecting imported cold-chain products in Baishazhou, the biggest farm produce market in Wuhan, told the Global Times that the market has enhanced inspection on such products after cold-chain related COVID-19 cases were reported.

"We require distributors to submit several documents, including a nucleic acid test result, before the products arrive. We test those products again and disinfect them," said the worker.

A meat vendor at the market told the Global Times that the market management office disinfected all the imported products last week and conducted nucleic acid testing for the packages, products and people who work in the market.

According to him, the stores in the market were also told to disinfect twice a day.

There is also support for expanding the emergency use of vaccines to people in the import industry.

"I know teachers in some cities have been vaccinated. If this can be done to teachers, it should also be done to logistics employees. The key is whether the vaccine is free of charge or at the expense of those vaccinated. Emergency use can only be arranged by health or disease control authorities," said Tao Lina, a Shanghai-based virus and immunology expert.