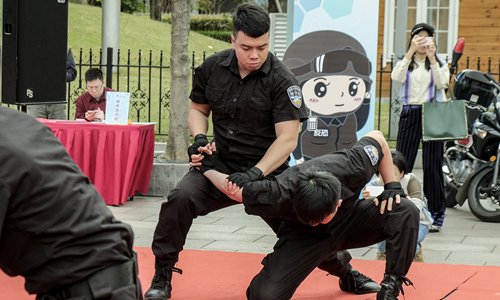 More regions in China have unveiled a larger range of fines for individuals, hotels and other organizations that violate the Counter-terrorism Law while experts called for greater promotion of the law to safeguard social security.According to media reports in December 2018 and January, different parts of China, including South China's Guangdong Province, Guangxi Zhuang Autonomous Region and Central China's Henan Province, handed out "anti-terrorism tickets" for individuals and organizations, most of which were hotels, for violating anti-terrorism laws.Receiving an "anti-terrorism ticket" does not necessarily mean that an individual or organization has engaged in terrorist activities. Fines can also be handed out for violating regulations related to the anti-terrorism law.According to China's Counter-terrorism Law, which took effect in January 2016, organizations that refuse to cooperate with the relevant departments on anti-terrorism precautionary measures, collecting information or dealing with emergencies, can be fined a maximum of 50,000 yuan, and even 100,000 yuan for violations that lead to severe consequences.  Authorities in South China's Guangdong Province have issued 52 tickets for violating anti-terrorism laws and regulations, and detained 17 individuals in the past three years. A total of 3.64 million yuan in fines were handed out, according to local news site ycwb.com.Most of the 52 fine tickets were given to hotels, transportation terminals, and logistics stations for not fulfilling their responsibilities on anti-terrorism or registering passenger information in line with the law. A man surnamed Jiang in Panyu, Guangdong Province, was detained for sharing videos on terrorism in a WeChat group. Police in Guangdong have reminded the public that all passengers should register their information when checking into hotels. Those who have not brought their identity cards but need to check in to hotels can go to the local public security bureau to verify their identity before checking in.Other areas, including Xining, capital city of Guangxi, reportedly issued its first anti-terrorism ticket this January. The active moves taken by law enforcement departments in China continue the momentum of the crackdown on terrorism, deter potential terrorists and enhance their capability of dealing with terrorist incidents, experts said. "Hotels and transportation terminals are places that see the largest numbers of migrants. Real-name registration will help supervise and manage the migrating population, especially in finding terrorist suspects who are at large. Collecting information on them would also help local authorities be on guard for possible terrorist incidents and find clues on suspects after any incidents," Li Wei, a Beijing-based anti-terrorism expert, told the Global Times.Li said that cracking down harshly on the dissemination of terrorism-related audio and video materials would effectively prevent terrorists from inciting terrorist activities and safeguard the social order.Promotional activitiesHowever, the increasing number of anti-terrorism fines being issued also showed that many individuals and organizations have little knowledge of the law, and more efforts should be made to promote the Law amid the growing threat of terrorism, experts said."Although many places have launched various activities to promote the Counter-terrorism Law and severe punishments have been handed out to those who violate them, it will still take a long time for the public to really get to know the relevant laws and regulations well," Li said.Different measures have been taken in China to promote the Counter-terrorism Law. The Henan news site zyjjw.cn reported on January 24 that police officers in Dengzhou handed out pamphlets on anti-terrorism in residential communities, taught residents how to spot terrorists, deal with terrorist incidents and how to save themselves in an emergency. Guangdong has come up with many novel ways to encourage citizens to take part in anti-terrorism promotions. Authorities in Guangzhou, capital city of Guangdong, in December organized anti-terrorism contests and awarded winners a set of anti-terrorism themed emojis specially made by authorities in Guangdong, according to the Guangdong Public Security Bureau.As early as May 2016, the anti-terrorism office in Guangdong released its first short anti-terrorism themed film and animation, according to the Guangzhou Daily."China's current efforts on anti-terrorism have protected our citizens' safety and brought a stable environment. But the threat of terrorism is always there and is growing, which means we should keep up the momentum, especially when the whole world is under the shadow of terrorism," Li said.