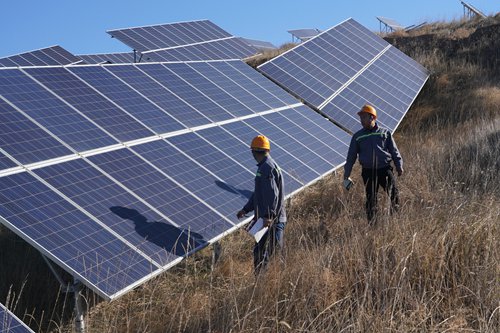 Photovoltaic (PV) poverty alleviation projects are among the solar-energy projects that will receive government subsidies in 2019, the National Energy Administration (NEA) said on Monday.The NEA also said distributed PV power stations and ground power stations will use a bidding method to receive subsidies, except for poverty alleviation projects, household use and special PV projects. Solar energy has become a vital force in China's poverty alleviation work, with the industry scale surpassing 7 million kilowatts in 471 national-level poverty-stricken counties since the government launched PV poverty alleviation projects in 2015, the Economic Information Daily reported in January. For example, there's Yaoqu village in Ji County, North China's Shanxi Province. The 1,076 villagers only earn about 2,000 yuan ($295) per year because of the area's weak transport links and lack of projects to develop the local economy, according to the report. Since a 100-kilowatt PV power station was established in 2016, the village has generated about 130,000 kilowatts of electricity per year, yielding nearly 200,000 yuan in profit, the report added. PV is a great industry to fight poverty because it can bring long-term stable incomes to local villagers, said Han Xiaoping, chief analyst at energy industry website china5e.com."Farmers are both electricity buyers and sellers in those areas. The electricity generated could be sold to the grid and the intelligent system would distribute the profits automatically," Han said. Han has proposed putting blockchain technology into PV projects in China's rural areas to solve the problem of unfair profit distribution. He also looks forward to an "after-state subsidy model" of PV development in China's countryside. "Once local farmers escape poverty, they could sell their surplus electricity to their neighbors. For instance, neighbors could charge their electric cars with that power," he added.Once such a healthy mechanism is established, those farmers would have better lives without state PV subsidies and truly benefit from the PV market.

Lin Boqiang, a professor at Xiamen University in East China's Fujian Province, noted a problem is that some farmers sell all the electricity to grid companies. That is not healthy for the PV energy sector's development, and the definition of villages that need such PV projects should be clearer.