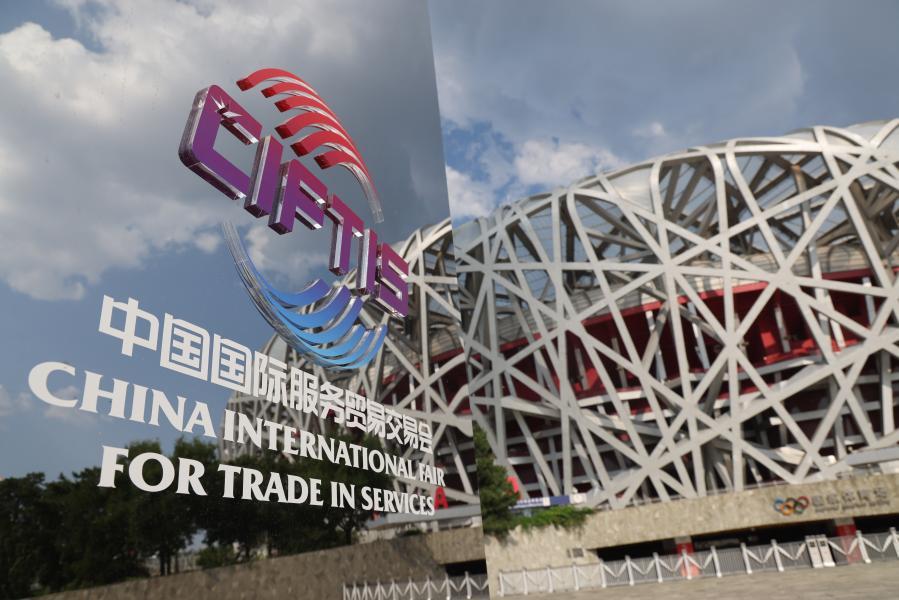 Photo taken on Sept 2, 2020 shows the outdoor exhibition area of the China International Fair for Trade in Services (CIFTIS) in Beijing. (Photo: Xinhua)

China plans to build pioneering fintech hubs nationwide, focusing on the research and development of blockchain technology and digital currency to boost investment in financial infrastructure, according to officials and experts on Tuesday.

They made the remarks at the 2020 China Financial Technology Forum, part of the ongoing 2020 China International Fair for Trade in Services in Beijing.

According to a report issued at the forum, Beijing ranks top among eight cities around the world, thanks to its huge consumer market, advanced technology application and fast development of the fintech ecosystem.

Other cities that China aims to develop as global fintech hubs are Shanghai, Shenzhen in Guangdong province, and Hangzhou in Zhejiang province, according to the report.

Last year, the People's Bank of China, China's central bank, published a three-year fintech development plan, from 2019 to 2021. So far, some results have been achieved and major projects are proceeding as scheduled, said Li Wei, head of the science and technology department of the PBOC.

So far, the basic technology framework of the digital currency designed by the central bank, has almost been completed, with sophisticated top-level design, and trials are ongoing in some application scenarios, said Ben Shenglin, co-head of the International Monetary Institute at Renmin University of China.

The fast progress will give the PBOC a leading position among its global peers in officially launching a digital currency, Ben told China Daily on the sidelines of the forum.

Zhou Gengqiang, deputy secretary-general of the China Banking Association, said that along with the research and promotion of the central bank digital currency, commercial banks should have more opportunities to provide usage scenarios, as well as data and client services, in order to bring more safe and convenient products to customers.

Executives from multilateral development banks expressed their expectations about the central bank digital currency, which is undergoing tests.

Anil Kishora, vice-president of the New Development Bank, a multilateral development bank set up by the BRICS nations－Brazil, Russia, India, China and South Africa-said that the PBOC is expected to be one of the leading central banks to issue a digital currency and attention should be paid to its impact on regulatory policy in the future.

Joachim von Amsberg, vice-president for policy and strategy of the Asian Infrastructure Investment Bank, said that the financing gap of digital infrastructure in Asia is predicted to reach $500 billion by 2030, which provides huge opportunities for the multilateral development bank to increase cross-border investment.

"The third group of fintech regulation projects in Beijing are in the pipeline," Li said. Beijing became the first city in China to launch fintech regulation trials, or the so-called Regulatory Sandbox, a British regulatory model. Now 17 projects are undergoing tests, including blockchain-based credit services and supply chain financing.