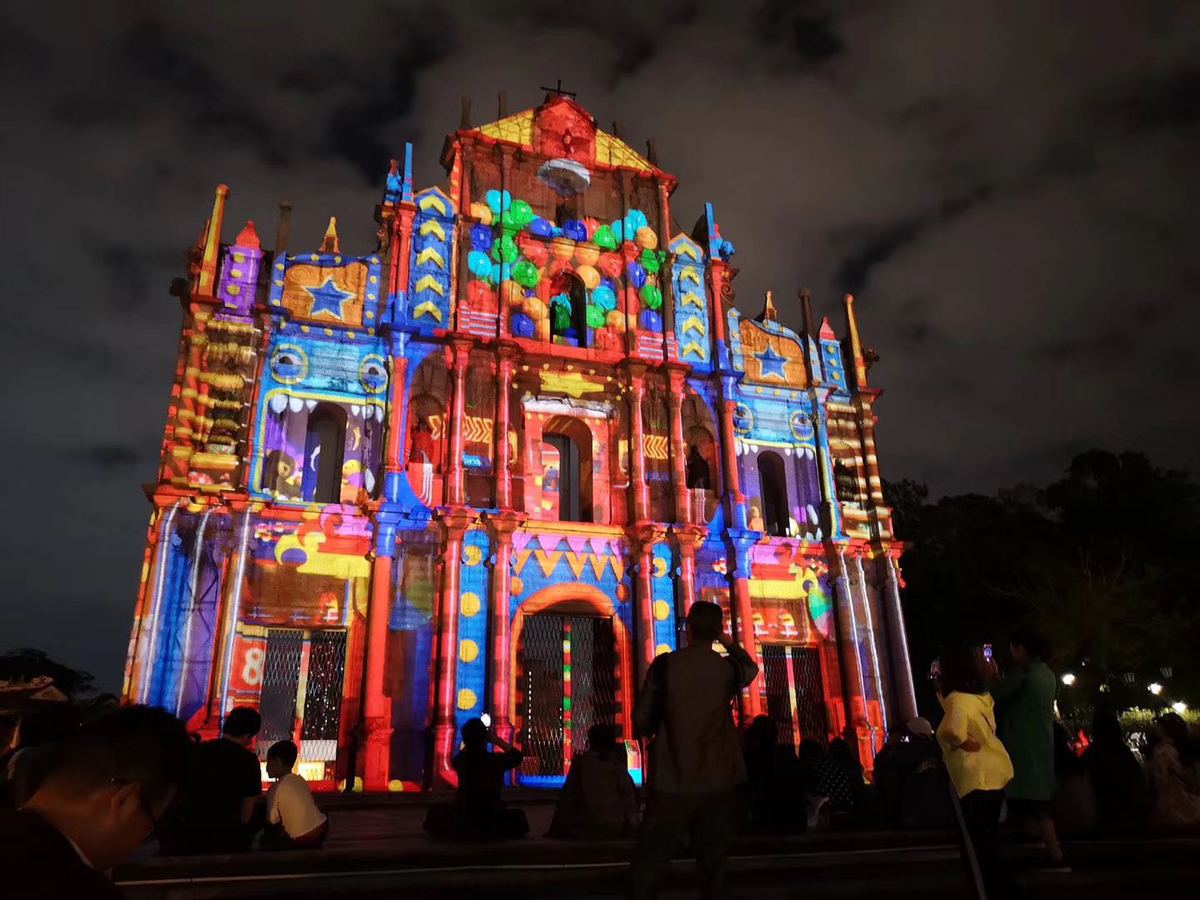 People gather at the Ruins of St. Paul's during the Macao Light Festival in the Macao Special Administrative Region on Tuesday. The festival began on Dec 1 and continues throughout the month. (File photo: China Daily)

Experts said on Sunday that President Xi Jinping's remarks during his three-day visit to Macao have charted a clear course for the city to diversify its economy.

During his trip to Macao, which ended on Friday, the 20th anniversary of its return to the motherland, Xi praised the city's achievements and economic growth in those years, and he urged the special administrative region's government to further diversify its economy and secure a better life for its people.

Macao lawmaker Lei Cheng-i said the city, whose economy has been gaming-oriented, should boost its tourism and financing industries to diversify, taking advantage of its unique resources.

The gaming industry is still dominant in Macao's economy, which is not a healthy development model, she said.

The city's economy has expanded sevenfold since 1999, and its per capita GDP is now the second-highest in the world.

But, she cautioned, despite Macao's stunning economic growth since then, there's still a long way to go to ensure sustainable development.

Zhou Xingting, chairman of Nam Yue (Group) Co Ltd, a State-owned enterprise registered in Guangdong province and based in Macao, thinks the SAR's achievements stem from the central government's firm support and a synergy of regional cooperation.

Macao's tourism, for example, hit a high of over 33 million visits to the city as of October, Zhou said, adding that its exhibition industry also thrives.

"Nowadays, a company would have a hard time finding a vacant conference room to hold an exhibition in Macao on short notice," Zhou said.

About 10 billion yuan ($1.43 billion) has been invested in the Traditional Chinese Medicine Science and Technology Industrial Park of Cooperation in Zhuhai's Hengqin New Area, which borders Macao.

Zhou said he is positive Macao will benefit from increasing its cooperation with other cities in the Guangdong-Hong Kong-Macao Greater Bay Area.

He said Macao could make good use of rich talent resources and high-end technology provided by the Greater Bay Area to secure a stable and prosperous future.

Zhang Yuge, director of the Center for Hong Kong and Macao Studies at the China Development Institute, said Macao's development should center on its positioning as "One Center, One Platform, One Base"－a world center for tourism and leisure, a commercial and trade cooperation service platform between China and Portuguese-speaking countries, and a base for exchange and cooperation between the mainstream Chinese culture and diverse coexisting cultures.

With a population of over 600,000, he said, Macao has relatively limited resources compared with Shenzhen and Hong Kong, both of which are in the Greater Bay Area.

"So Macao should seek cooperation with neighboring cities for a complementary development strategy," he said.