The number of new confirmed COVID-19 cases in Beijing went down to three on Tuesday, the lowest in the past 19 days, prompting experts to predict that the capital may report zero new confirmed cases in about one week. 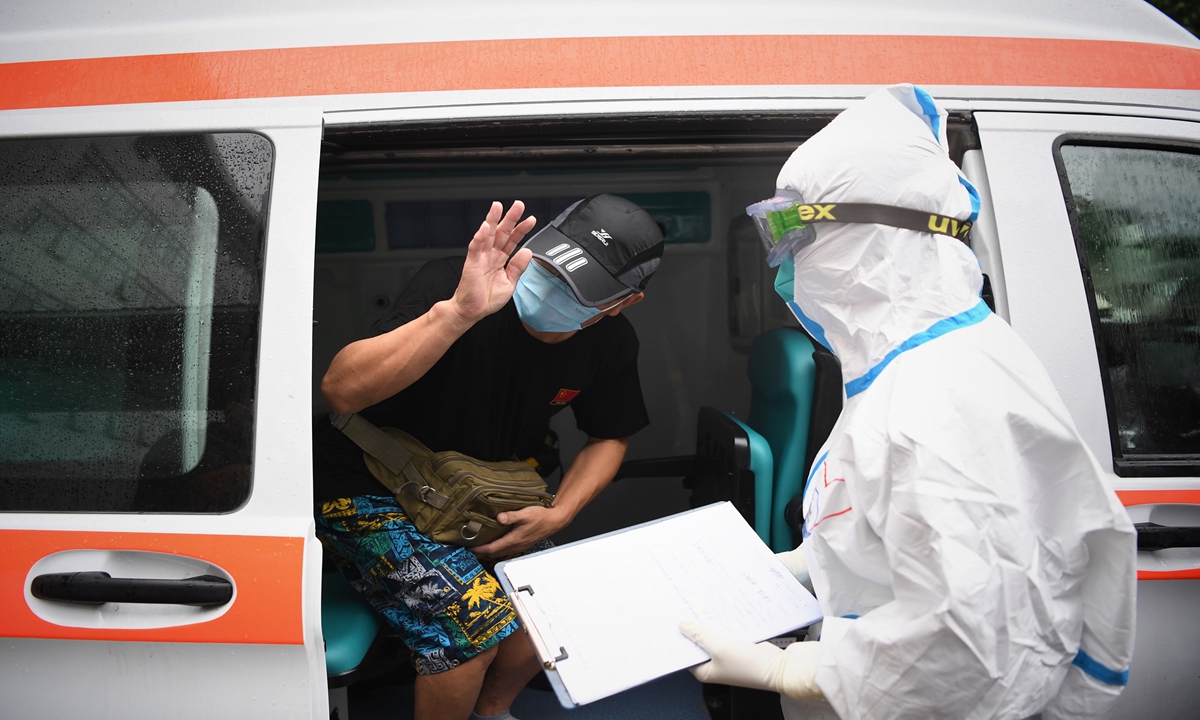 A COVID-19 patient surnamed He waves his hand to medical staff on Monday. He, the first COVID-19 patient related to the Xinfadi Market in Beijing, has been discharged from Beijing Ditan Hospital. Beijing reported 7 newly confirmed COVID-19 cases on Monday, a drop of 7 compared with Sunday. (Photo: VCG)

Since the latest outbreak on June 11, Beijing reported a total of 328 COVID-19 patients and 26 asymptomatic infections under medical observation.

The number of new confirmed cases in Beijing has been in single digits for three consecutive days, with seven on Sunday and Monday, and three on Tuesday, according to data from Beijing health authorities.

It is also the first time Beijing's Fengtai district, where Xinfadi market is located, has reported no new confirmed cases since the outbreak.

The number of new confirmed cases in Beijing might go down to zero in around one week, no more than two weeks, as the cases found recently were mostly people who had already been quarantined and put under observation, said Wang Guangfa, a respiratory expert at Peking University First Hospital who has closely followed the epidemic.

Throughout the citywide nucleic acid testing, no newly confirmed cases were found in recent days, meaning the epidemic situation in Beijing is basically under control, Wang noted.

As of Sunday, Beijing had tested over 8.2 million people.

In a sign that the epidemic situation is improving, 12 communities near Beijing's Xinfadi market, where clustered infections were traced, will gradually lift lockdown measures from Tuesday.

Lockdowns on the first batch of five communities in the district where no COVID-19 cases were reported were lifted on Tuesday. Seven other communities will undergo another 14 days of closed-off management after the last patient was released from quarantine. Those who have been to the beef and lamb section of the Xinfadi market will continue their quarantine.

Residents will have to enter the community with their real-name entrance ticket and sign letters of commitment. Some 520 officials will continue to stay in local communities providing services for residents.

While there are signs that the epidemic in Beijing is easing, the restrictions have yet to be completely lifted, and nucleic acid tests will be required for anyone traveling out of Beijing and people will still have to have their body temperatures taken in public venues.

Wang told the Global Times that Beijing should prepare for a long-term fight against COVID-19, while imposing regular anti-epidemic measures that will not bring the economy to a standstill, and suggested gradually easing restrictions that hinder normal economic activities.

To identify potential infections, Beijing has been testing people around food markets, restaurants, deliverymen, hairdressing salons as well as hospitals.