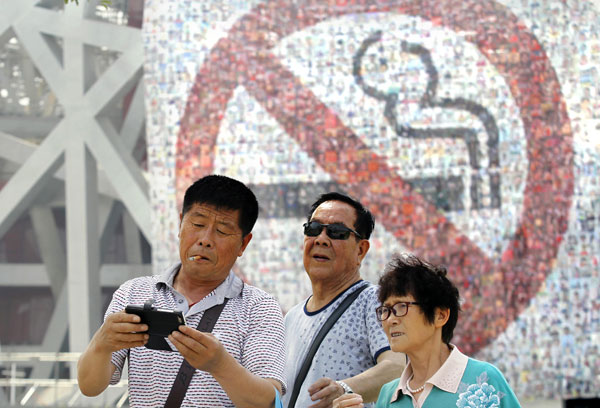 A man smokes as he stands in front of an anti-smoking poster in Beijing. (Photo: China Daily)

At least 30 percent of the population in China should be covered by such regulations by 2022, and 80 percent by 2030, according to a national health promotion plan released by the State Council in July.

Although accelerating tobacco control legislation will play an important role in improving the overall health of the population, a national regulation on tobacco control will be necessary so the targets can be achieved on time, a tobacco control expert said.

"For the present, at most 10 percent of the total population in China is covered by comprehensive tobacco control regulations," said Wu Yiqun, former deputy director of Thinktank Research Center for Health Development, a nongovernmental organization based in Beijing.

"Looking back at tobacco legislation at local levels in the past, I cannot see how we can achieve the 30 percent target in just three years' time without setting a national regulation on tobacco control."

Only 24 cities in China have adopted tobacco control regulations since China ratified the World Health Organization Framework Convention on Tobacco Control in 2006. Of those 24, only nine of them, including Beijing, have comprehensive regulations that ban smoking in all indoor public places and workplaces, including public transport, while regulations adopted by the other cities have exemptions, such as certain entertainment venues, said Wu, who is also a researcher at the Chinese Center for Disease Control and Prevention.

Li Enze, deputy director of the Chinese Association on Tobacco Control's Law Committee, said tobacco control legislation at national and local levels must be accelerated in the next decade so at least 80 percent of people in China can be covered.

In addition, cities that have adopted incomplete tobacco control regulations should transform them into more comprehensive ones to help meet the target, he said.

A researcher at the center for disease control, who prefers to be anonymous, said a national tobacco control regulation is very likely to be adopted over the next few years, but it may grant more time to certain less developed regions in China so they can enforce the regulation.

"Experience has shown disparities exist in the enforcement of tobacco control among different areas in China where such regulations have been adopted. In the more developed areas law enforcement is generally better," he said.

"It is unrealistic to totally rely on local authorities across China to make their own comprehensive tobacco control regulations, considering the size of the country and unbalanced development between different regions," he said.

Cui Xiaobo, a public health professor in Capital Medical University in Beijing, said tobacco control legislation should be promoted in all major cities first, including capital cities of all provinces and autonomous regions, so it covers more people.

China has the world's largest number of smokers, and more than 1 million people in China die every year due to smoke-related diseases. The smoking rate for people 15 years old or above in China should be reduced to 20 percent by 2030 - from 26.6 percent last year - according to a national plan released in 2016.

Although an increasing number of cities in China have adopted tobacco control regulations over the past few years, a national regulation is still lacking. In 2014, a draft of a national regulation intended to ban smoking in indoor public places was submitted by the top health authority to the State Council and is still awaiting approval, according to the Chinese Association on Tobacco Control. Resistance from the powerful tobacco industry has been a major cause for delayed tobacco control legislation at the national and local levels, it said.