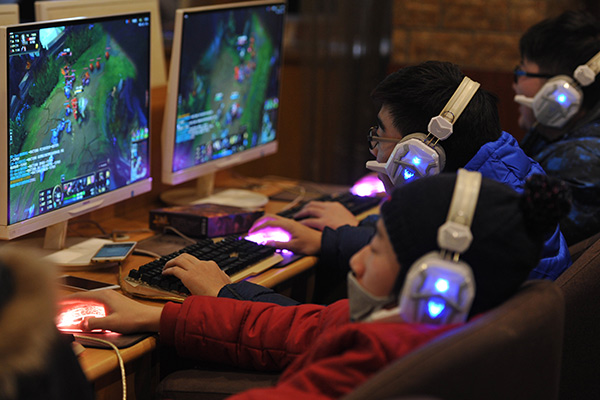 Addiction to online gaming among children and teenagers is becoming a common concern for parents and educators. (Photo: China Daily)

Excessive use of electronic products rising in China, notably among youths

More efforts should be taken to reduce gaming addiction among young people－which is getting more serious in China－to protect their physical and psychological health, a member of the Chinese Academy of Sciences said.

"Gaming disorder among young people, including adolescents, is a serious problem throughout the world, and its incidence is also increasing in China," Lu Lin, who is also president of Peking University Sixth Hospital, said at a news conference at the National Health Commission on Tuesday.

Excessive use of electronics, including video games, over a long period can disrupt normal life and cause disorders in behavior, he said. It can also affect healthy brain development for children and adolescents, he added.

Game disorder was recognized by the World Health Organization as a disease in May. It is described as a pattern of persistent or recurrent gaming behavior that usually persists for more than a year and which has had a negative impact on individuals, their families and work.

With the prevalence of electronics, increasing addiction to video games among the youth in recent years has resulted in many experts warning of its side effects, including the high ratio of myopia among students.

According to a national health promotion plan released earlier this month by the State Council, China's Cabinet, more measures will be taken over the next decade by the whole of society to focus on improving the physical and psychological health of primary and middle school students. They should have outdoor activities for at least an hour after school every day, and it is suggested they use electronics for no more than 15 minutes at a time for purposes other than study, according to the plan.

"Easy access to electronics products has played a major role in increasing the number of young people getting gaming disorders," Lu said. "In addition, many children lack enough extracurricular activities or other entertainment, which has caused them to become addicted to video games."

Some adolescents with game addiction may have become addicted as a result of other conditions, such as a lack of ability to focus, which has caused difficulties in their studies or interpersonal relationships and made them more willing to indulge in video games, Lu said. Professional medical workers are needed in these cases to help them root out the causes to reduce game disorder, he said.

Yang Fude, president of Beijing Huilongguan Hospital, said people who suffer psychological problems such as depression or frustration can seek help at certified hospitals and clinics, which can prevent the worsening of conditions and occurrence of mental disorders.

There is no official data on the prevalence of gaming addiction among internet users in China. According to a report released by China Internet Network Information Center last year, more than a quarter of all internet users in China are students, and teenagers between 12 and 16 years old are most likely to become addicted to the internet.