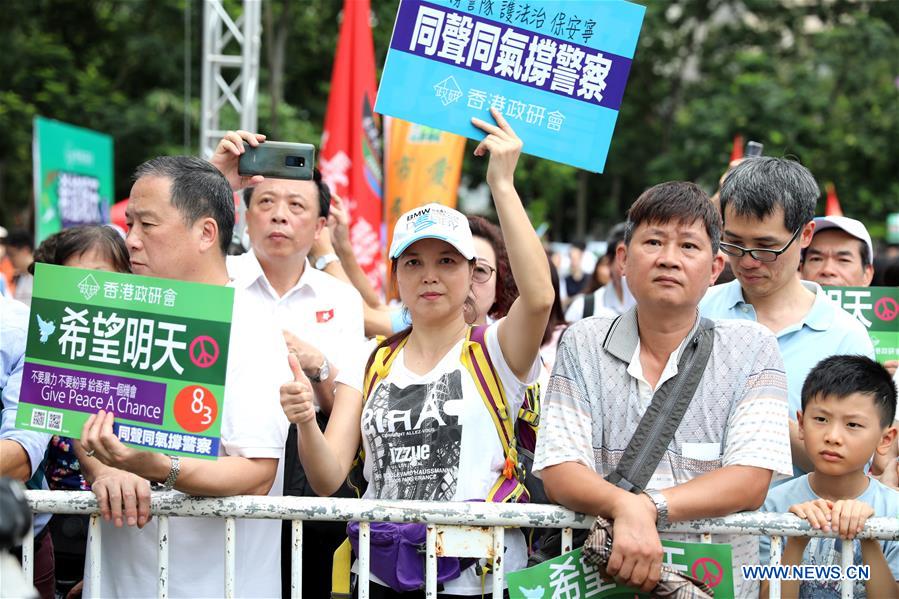 People take part in a rally to denounce violence and support police force at Victoria Park in Hong Kong, south China, August 3, 2019. Tens of thousands of Hong Kong residents gathered at a park on Saturday afternoon to express their strong opposition to violence and firm support to the police force. (Photo: Xinhua)

BEIJING (Xinhua) -- Experts have urged an end to the blatant violence perpetrated by radical demonstrators in Hong Kong and denounced external forces behind the protests.

Madan Regmi, chairman of China Study Center, a Nepal-based think tank said he is saddened by the worrying situation in Hong Kong.

Deeply concerned with the situation, he said "the protesters, with ill intentions, are abusing the basic rights to realize their hidden interests ... and unlike normal protesters with reasonable demands."

Hong Kong enjoys its own system, quite different from the system in the Chinese mainland, Regmi said.

"But no matter how big differences are in these two areas, 'one China' policy is the precondition. What the violent protesters are doing has defied the one China principle in a degrading way," he stressed.

In response to Hong Kong-related queries at a meeting with the foreign ministers of Japan and the Republic of Korea on Wednesday, Chinese State Councilor and Foreign Minister Wang Yi condemned the violent attacks as a serious "challenge of the bottom line" of the "one country, two systems" principle governing Hong Kong.

"No responsible government or rule-of-law society will tolerate these acts," Wang said, emphasizing that Hong Kong affairs are China's internal affairs and brook no interference by external forces.

Wang called on relevant parties to uphold an objective and fair position on the situation in Hong Kong.

Comrade Dilip Barua, general secretary of the Central Committee of the Communist Party of Bangladesh, expressed his deep concern regarding the violent unrest and blockades in Hong Kong in the name of so-called "democratic movement."

"Hong Kong is an integral part of China on the basis of 'one country, two systems,'" which has functioned well since its return to China in 1997, Barua said.

He urged Hong Kong people not to be "misguided" by "some vested interest groups" seeking to foil this fundamental principle but to engage in "building up a more prosperous Hong Kong."

R.N.Bhaskar, consulting editor of "Asia Converge" and guest faculty at several institutes in India and overseas said the strikes and the airport blockades were "a foolish move" at the expense of huge economic losses to Hong Kong's businesses.

Denouncing the provocations on local police, he said, "don't provoke police, don't get violent, don't use force. Force will be met with force because you are challenging the sovereignty of the country."

"Don't go on to strike, because the longer the strike, the worse will be the plight of business and so on," Bhaskar said, calling for more restraint rather than violence.

John Zhang, honorary president of Shanghainese Association of Australia, said the future of Hong Kong is held in the hands of its people and not others, because this is purely an internal affair of China.

He believed that demonstrations, whether in the United States, European countries or in Hong Kong, should be carried out in line with relevant laws and regulations, and not at the price of disrupting social order and grinding local services to a complete halt.

Meanwhile, Hugh H. Mo, a former deputy police commissioner of New York City Police Department (NYPD), said that the right to protest should be respected on condition that it is carried out in line with laws.

"The police, a symbol of law, are the defenders of our society, and should never be treated as enemies," he said.

The former NYPD officer said that he would like to see the rule of law restored in Hong Kong, a society long famous for its prosperity, good governance and friendliness.

Faruk Boric, a renowned media commentator in Bosnia and Herzegovina and also chairman of BiH-China Friendship Association said that the Asian financial hub of Hong Kong, once crowned the "Pearl of the Orient" is dimmed by the ongoing violence, and will lose its luster if nothing is done to stop this.

He called on young people in Hong Kong to cherish the region's hard-won economic status and participate constructively to restore peace, order and the dynamism for growth.