Experts warn external risks, but are sanguine about China's economy

With stringent COVID-19 prevention and control measures, China’s economy can expect a high-quality growth, but should keep an eye on “external risks”, experts said. 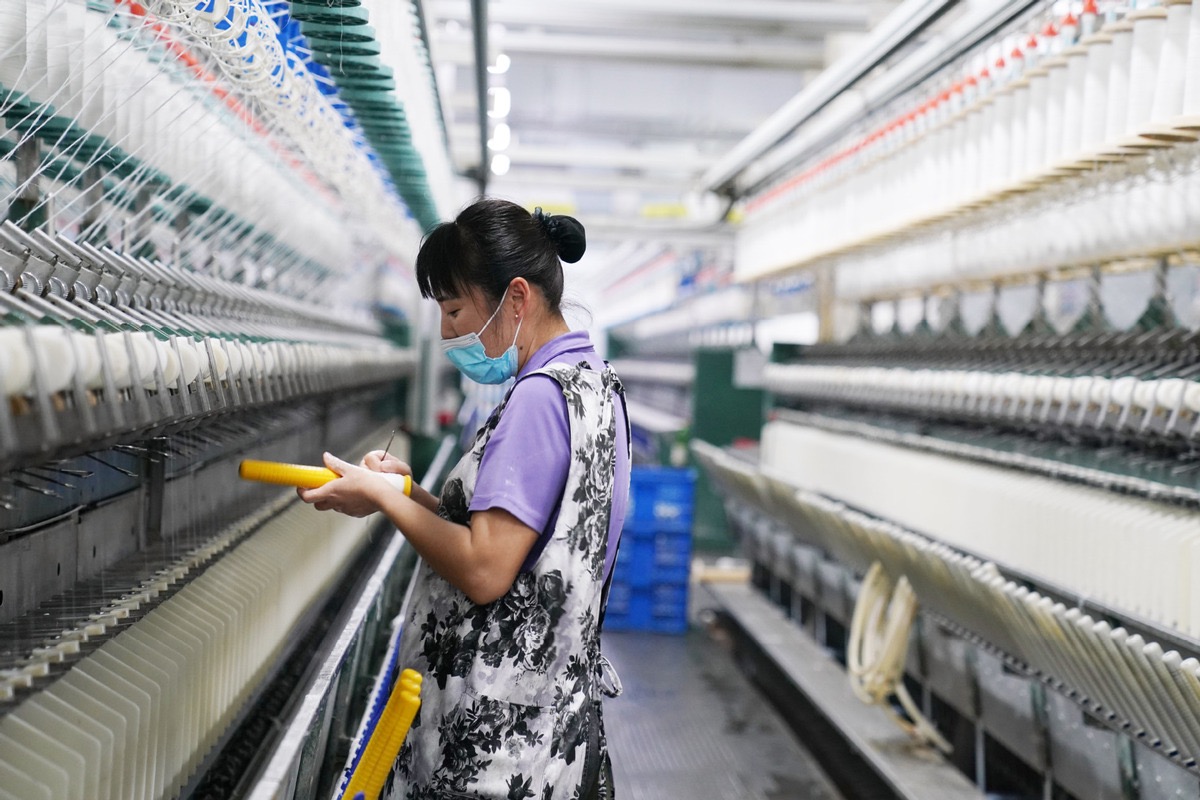 During the past weeks, most provinces across China have released the work report of local governments and more than 20 of them are planning to achieve a GDP growth above six percent. The highest are Southern China’s Hainan Province and Central China’s Hubei Province, with an expectation of more than a 10-percent growth in GDP this year.

Official data showed Hubei, formerly hard-hit by the coronavirus, achieved a GDP of 4.34 trillion yuan ($671.94 billion) in 2020, a five percent decline from the year before.

However, the province’s recovery was better than expected, as the economy shrank 39.2 percent in the first quarter. In the government work report, Provincial Governor Wang Xiaodong called a 10 percent growth the minimum requirement and vowed to strive for a “better outcome.”

Feng Fei, acting governor of Hainan, said 2021 is a crucial year for the island province to comprehensively deepen reform and opening up and expedite the construction of a free trade port. Over the last year, the three offshore duty-free shops shoveled in a sales of 32.7 billion yuan ($5.07 billion), benefiting from the duty-free policies enforced in last July. 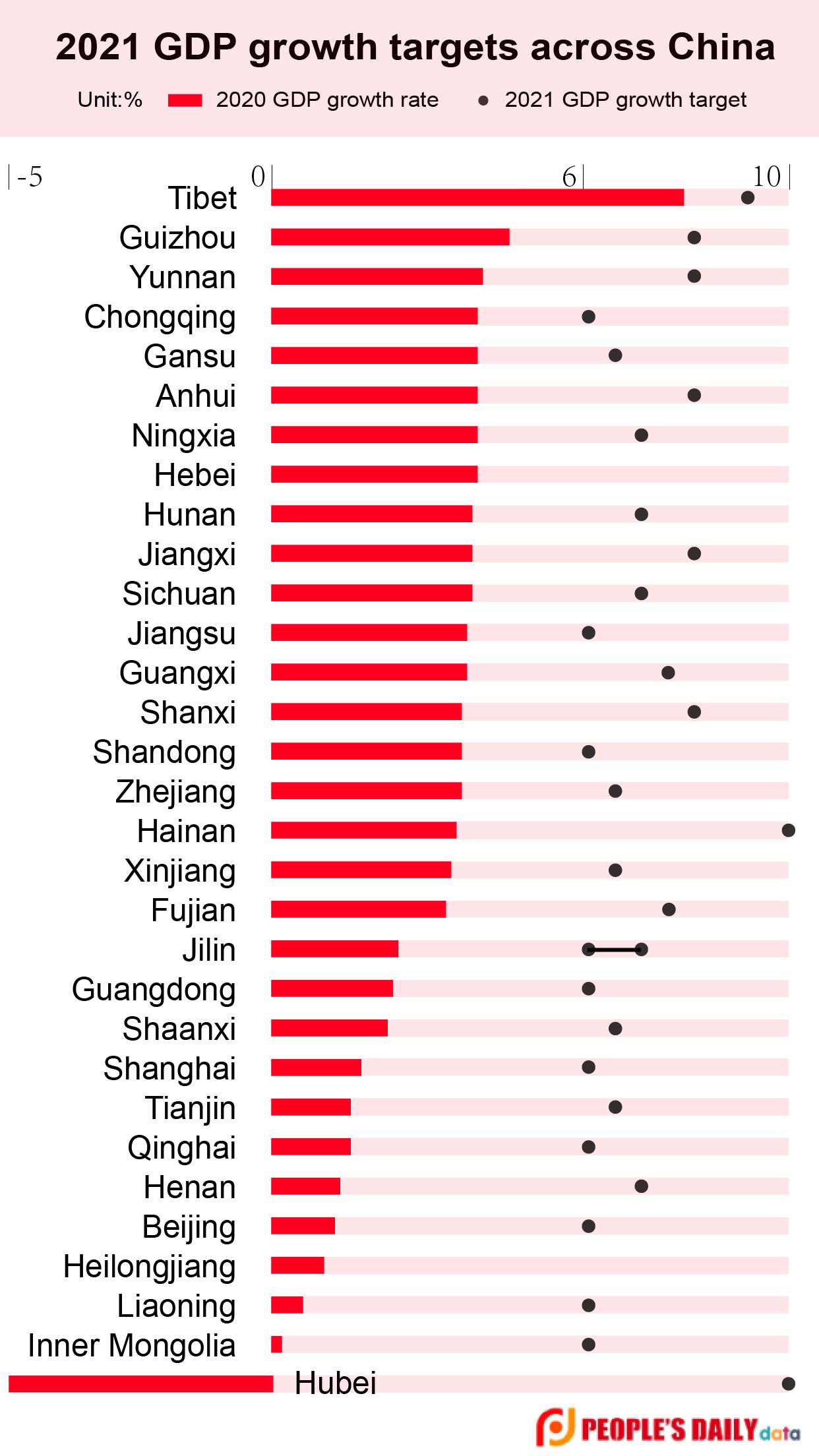 Twenty-nine of 31 provinces and regions in the Chinese mainland have disclosed their GDP growth targets for 2021. (Graphic designed by Wang Zi/People’s Daily)

Behind a fast recovery of China’s economy is an effective control of the coronavirus, Tian Yun, vice director of the Beijing Economic Operation Association, told the People’s Daily.

“The pandemic has more impact on the supply side than consumption,” Tian said. “When China has tamed the virus, being the only economy with all industrial categories, it met the demand for products from other countries through exports.”

China's economy expanded by 2.3 percent in 2020, the only major economy to report growth. Most provinces have seen their economy slow down in the past pandemic-ravaged year. Tibet topped with a growth rate of 7.8 percent and provinces like Shanxi, Hebei, Shandong, Zhejiang were at 3.6 percent. Analysts predict that the economy is to rebound sharply on the heels of a deceleration in the previous year, as a result of the base effect.

Although provinces generally made a growth target of no less than six percent, it should be seen as a move more of caution than ambition -- to gear up China for any risk lurking in economic development, Tian said.

The GDP targets for 2021 made by provinces are also lower than the projection of international analysts: the World Bank expected China’s economy to expand by 7.9 percent in 2021, and the International Monetary Fund predicted China's economy will grow by 8.1 percent.

External risks still persist, according to Tang Yao, associate professor at the Guanghua School of Management of Peking University, while the pandemic is raging across the globe.

“The overseas market demand faces more changes during this time,” said Tang. “Some countries turned to China for international orders last year. However, they may not necessarily renew their contracts this year.”

“Besides, some countries have repeatedly shown uncertainties in their control of the pandemic, which will discourage their demand for China’s products.” He said, adding that the US financial market’s accumulated risks could also generate fluctuations in the Chinese economy.

In 2020, the government work report submitted for deliberation during the two sessions, China’s most important annual political meetings, listed no definite GDP growth target. Tian said that the Chinese government will likely revisit the idea this year.

“We have been advising that GDP not be seen as the sole goal of economic growth since last year,” Tan said. “We feel like this thinking is going to guide throughout this year, making ‘six guarantees’ and ‘six stabilities’ the focus of economic development instead.”

But an economic plan without growth targets will leave investors and policymakers dealing with more uncertainties, Tang pointed out.

“I don’t think this year will be the same,” He said. “ Without a specific goal for GDP growth, the implementation of the 2035 Long-range Targets will be lacking a ‘handle’.”

Tang was referring to the “Long-range Objectives through the Year 2035”. It was approved in the third plenary Session of the 18th CPC Central Committee in November. The plan aims to double China’s GDP by 2035.

“The investment and expansion of industries in China is closely related to the macro economic growth. There will be more uncertainties if a specific economic goal is not laid out. ” Tang said, adding that China’s fiscal policies and monetary policies also rely on it for reference.

In addition to the GDP growth rate, Tang said there are other factors including the unemployment rate and Consumer Price Index (CPI) that can reflect the health of China’s economy.

“Our economy is constantly making adjustments to its structure while pursuing economic growth,” Tang said. “The service industry should account for more percentage in the GDP. So the growth rate of service industry is an important indicator. From the perspective of the dual-circulation strategy, we would also like to see a steady increase in consumption.”

The investment in the manufacturing industry should not be overlooked because the supply-side reform is largely influenced by the flow of investment, he added.

At the end of the day, Tian believes GDP growth is a natural result as China pushes for enhancing the quality and optimizing the structure of the economy.

“Promoting employment, raising people’s income, upgrading consumption, these align with the interest of the public and are more compelling economic goals to work on,” Tian said. “You need to look at the sustainability of GDP growth rather than a short-term boost. A well-structured GDP is more important.”