Experts warn of health risks brought by resistance to antibiotics

Antibiotics have been detected in the urine of pregnant women and children in China's Yangtze River Delta, recent researches revealed, sparking widespread concerns over the abuse of antibiotics, with some experts calling for antibiotics to be included in the national security monitoring system. 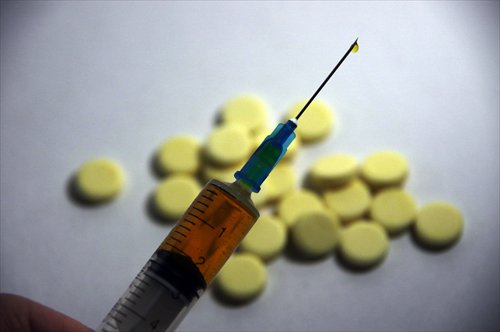 Antibiotics can come from being prescribed, from self-medication or from water or food that has been polluted with antibiotics. (Photo: IC)

Twenty-one kinds of human, veterinary or human and veterinary antibiotics were detected in urine samples of children. At least one type of antibiotic was found in the urine of about 79.6 percent of school-age children. Some of the antibiotics have been clinically banned, which could lead to children suffering from obesity and precocious puberty, according to a survey conducted among thousands of children aged 8-11 years and 516 pregnant women by the School of Public Health of Fudan University in Shanghai.

At least 16 antibiotics were detected in the urine of pregnant women in the provinces and regions of Jiangsu, Zhejiang and Shanghai, with a detection rate of about 41 percent, Liaowang Weekly unveiled the study on Sunday.

The average concentration of antibiotics in the Yangtze River is 156 nanograms per liter, which is higher than some developed countries in Europe and America. The discharge of antibiotics in the lower reaches of the Yangtze River ranks among the top three in the country, with an annual emission intensity of approximately 60.0 kilograms per square kilometer, the report said.

Answering questions on how the human body could contain such large amounts of antibiotics, Chen Qiuwen, the director of the Yangtze River Conservation and Green Development Research Institute, told the Global Times that it is because human beings drink contaminated water or consume contaminated aquatic products. Antibiotics cannot be completely metabolized after entering the human body, but can follow the blood circulation and affect multiple organs, resulting in reduced immunity.

Ma Jun, director of the Beijing-based Institute of Public and Environmental Affairs, told the Global Times on Sunday that antibiotics in water mainly come from hospital and pharmaceutical factory wastewater, as well as aquatic and livestock breeding wastewater.

Ma warned that in the wake of the COVID-19 pandemic, we should pay extra attention to the excessive use of antibiotics. Very strong resistance to antibiotics can result in disastrous health consequences for human beings during the process of bacterial mutation, Ma warned. "Antibiotics won't exert a direct influence on human body but could result in long-term drug-resistance."

Livestock breeding enterprises in the middle- and lower-reaches of the Yangtze River were found to be using antibiotics in the breeding of pigs, chickens and aquatic products, as they help reduce diseases among livestock, the Yangtze River Conservation and Green Development Research Institute found.

Colistin sulfate and chlortetracycline are commonly used antibiotics in feeding pigs. Researches also showed that the Yangtze River has been contaminated by antibiotics from wastewater from pharmaceutical factories and hospitals. Sewage outlets of pharmaceutical manufacturers have been found near streams of drinking water sources in the region.

Ma told the Global Times that to curb the abuse of antibiotics, health and environmental protection departments should strengthen monitoring of sewage discharge from livestock breeding enterprises and pharmaceutical factories and guide aquaculture practitioners to use antibiotics reasonably and reduce their dosage.

Other experts also suggested including antibiotics in the monitoring indicators for drinking water as well as the national security monitoring system.