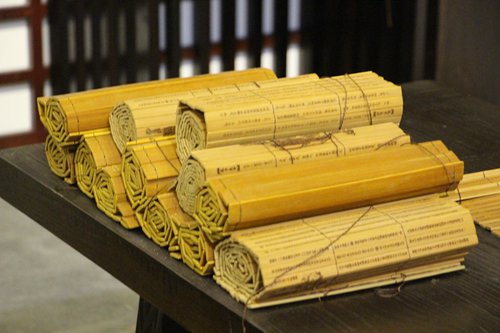 Replicas of the Shuihudi Bamboo Slips of the Qin Dynasty Photo: IC 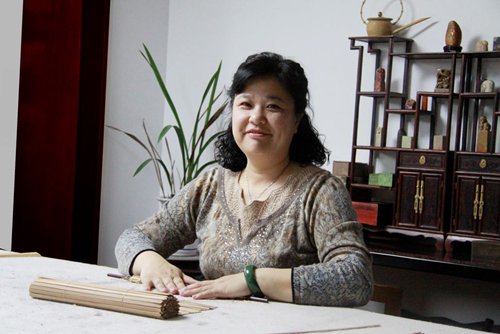 Can you imagine sitting down and reading a more than 2,000-year-old book that gives you insight into what ancient Chinese thought about subjects ranging from fortune telling to forensics? Well, the ancient Shuihudi Bamboo Slips of the Qin Dynasty (221BC-206BC) do exactly that. The legendary historical item returned to the spotlight recently after appearing on the second episode of National Treasure, the hit China Central Television (CCTV) show that introduces various ancient Chinese relics, on December 10. Unearthed in 1975 from a Qin tomb in Shuihudi, Yunmeng county, Central China's Hubei Province, the book is comprised of numerous bamboo strips - a medium ancient Chinese often used to write on before the invention of paper - upon which are written treatises on subjects such as politics, economics, law, medicine and even fortune-telling dating back to as early as China's Warring States (475BC-221BC) period.The records are believed to be written by a Qin official named Xi, in whose coffin the slips were found. Almost half of its contents cover the laws and legal practices during the reign of Qin Shi Huang (259BC-210BC) - the founder of the Qin Dynasty and China's first emperor.Now part of the Hubei Provincial Museum collection, the Shuihudi Bamboo Slips are considered one of China's earliest encyclopedias.Window to the past"The item's historical significance exceeds many other Qin bamboo slips that have been unearthed so far," Ding Hua, a former researcher at the Hubei Provincial Museum who spent three decades studying Qin bamboo slips, told the Global Times in a telephone interview on Friday. "You can see how the Qin evolved from a kingdom to an empire and read about some historical details that can't even be found in the Records of the Grand Historian, [a history of ancient China completed in 94BC]," Ding said.The researcher noted that when documenting battles, the slips' author tended to write the character sheng (win) larger than other characters and the characters lunxian (lose) smaller, which Ding said she believes "reflects that the recorder is an emotional man of personality."Additionally, the records provide insight into the society of the time through records discussing how the Qin government dealt with epidemics such as leprosy and fortune-telling details such as how they believed the time of day when someone was born would influence their fate. Moreover, the Shuihudi Bamboo Slips even contain what is one of China's earliest records on environmental protection, Chen Zhenyu, former head of the Hubei Provincial Institute of Cultural Relics and Archaeology and also a member of the team that unearthed the slips, said on National Treasure. "It is recorded in the Shuihudi Bamboo Slips that deforestation and bird hunting were forbidden from spring to autumn," Chen said.Aside from the look into ancient history that the slips give readers, they also provide researchers insight into how Chinese characters evolved over time. "Characters on the Shuihudi Bamboo Slips are written in a style that lies between the seal script [that was mainly used during the Zhou Dynasty (1046BC-256BC)] and the clerical script [that rose to dominance during the Han Dynasty], which helps us better understand how the former style evolved to the latter," said Ding.Replicating historyDue to the fact that the tomb where the slips were found was flooded, the slips became bloated with water. For this reason, they must remain in a carefully controlled environment or else they will dry out and become shriveled, which causes to the writing to become completely unintelligible. For this reason it is very difficult to put the slips on display on a regular basis either at the Hubei Provincial Museum or elsewhere, Ding told the Global Times.To meet museums' exhibition needs, Ding managed to replicate the Shuihudi Bamboo Slips in its entirety. One of these replicas is now on permanent display at the National Museum of Chinese Writing in Central China's Henan Province.Her time spent researching and reproducing the slips gave Ding a clearer idea about how they may have been made. "Ancient craftsmen used 5-6-year-old bamboo stalks for the Shuihudi Bamboo Slips. The bamboo had to first be cooked and dried to make it insect-proof before it could be cut into slips to be written upon," Ding said. "High-quality Chinese herbs were added to the writing ink to help make it more durable and that's why the characters still look bright and black after thousands of years."Even more challenging than creating the bamboo strips themselves was getting the writing correct. Since the strips are roughly 8 millimeters wide and 20 centimeters long, writing some 50 Chinese characters on each strip required knowledge of calligraphy, a deft hand and lots of patience. Fortunately, Ding has practiced calligraphy since she was a child. This experience allowed things to go far more smoothly than she originally expected. "The bamboo slips are an invaluable heritage from our ancestors, so I approached the replication with awe and respect," Ding explained.