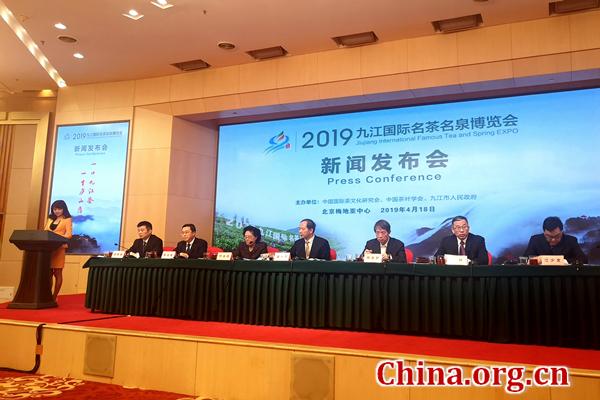 The press conference of the 2019 Jiujiang International Famous Tea and Spring Expo is held in Beijing on April 18, 2019. (Photos: Zhang Jiaqi/China.org.cn)

An international expo of famous tea is inviting the global tea industry at the end of May to visit Jiujiang, an ancient tea market in China's Jiangxi province.

Organizers of the 2019 Jiujiang International Famous Tea and Spring Expo held a press conference Thursday in Beijing, and announced that the expo will take place in Jiujiang from May 29 to 31. Organizers are looking to gather global tea company representatives, distributers, experts, organization purchasers, and individual consumers to attend.

An introductory brochure handed out at the press conference says that apart from various kinds of tea, the expo will also showcase tea wares, tools used in the cultivation, picking, processing, packaging, storage, transportation and assessment of tea, and tea cultural products.

According to Xie Yiping, mayor of Jiujiang, the expo will comprise a summit on black tea development, a forum on the culture of famous tea and spring, a promotional session for tea enterprises and purchasers, and other events. Tea-tasting sessions will also be held in different places around the city during the expo, which is expecting 10,000 attendees.

The brochure also mentions the expo's preferential policies aiming to attract exhibitors. For example, the organizing committee will take charge of the basic construction of the booths at the expo as well as the reception of exhibitors. Application forms for exhibitors to participate in the expo were also handed out at the press conference.

In addition to inviting companies from other places to display their tea products in an exhibition area of approximately 10,000 square meters, the city will also promote various types of tea of its own, like the Ninghong Tea and the Lushan Cloud and Fog Tea. These teas have previously claimed national and international prizes.

Government officials of the city also invited the participants to visit its three famous springs including the Gulian Spring, and said that water from these springs have contributed a lot to the aroma of its tea.

According to the mayor, the city along the Yangtze River has been an important tea production and distribution center in China since ancient times. In 1829, 41% of Jiujiang's customs revenue originated from its tea trade.

Now, the tea-planting area in the city exceeds 23,000 hectares. He said that the city is planning to develop over 2,600 hectares of tea gardens this year, and further integrate the development of its tea industry and its tourism through efforts like the construction of the Lushan Cloud and Fog Small Town and activities like the expo. 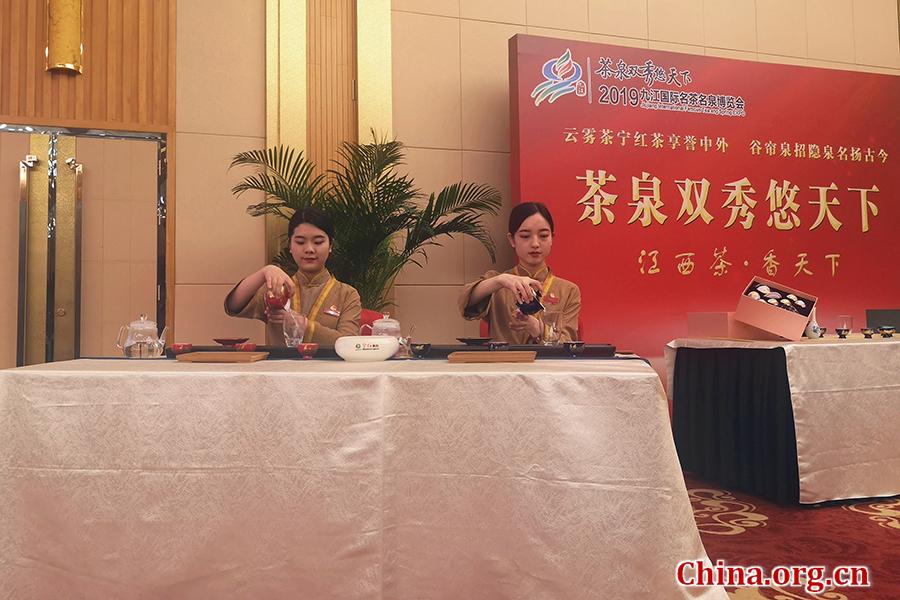