Extra tariffs on US vehicles, parts to remain suspended 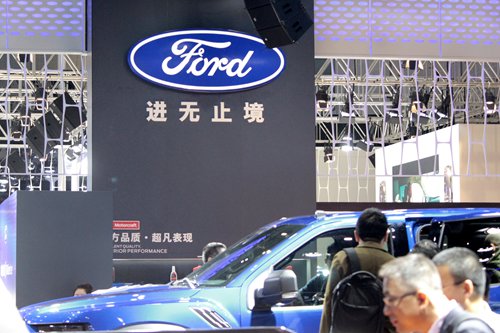 A view of US automaker Ford's stand at the China International Import Expo in Shanghai in November 2018 (Photos: VCG)

Starting on Monday, China will extend its policy of not imposing higher tariffs on imported US vehicles, as part of the country's effort to create a good environment for bilateral trade talks with Washington and implement the consensus reached by Chinese and US leaders in Buenos Aires, Argentina last year, the Customs Tariff Commission of the State Council, China's cabinet, announced on Sunday.

The extended policy will be in effect until further notice, the statement of the State Council tariffs commission said.

The move is an extension of a three-month temporary suspension on additional tariffs on US-made vehicles, which took effect on January 1, after Chinese and US leaders reached a 90-day trade war truce in Argentina on December 1, 2018.

China imposed the additional tariffs on US cars in July and on some auto parts in September as part of its retaliation against the US in the trade war.

"The prolonged policy shows the positive gestures China has taken in facilitating bilateral trade talks. It also indicates that certain progress has been made during the ongoing consultations. Otherwise, China would not be willing to renew the suspension," Bai Ming, an analyst at the Chinese Academy of International Trade and Economic Cooperation, told the Global Times on Sunday.

He also urged the US to take a similar conciliatory approach as China has done to reach a trade deal.

Chinese and US trade negotiators wrapped up the latest round of trade talks in Beijing from Thursday to Friday, with US Treasury Secretary Steven Mnuchin saying they had been "constructive," the Associated Press reported.

A Chinese delegation led by Vice Premier Liu He will arrive in Washington for a fresh round of trade talks this week.