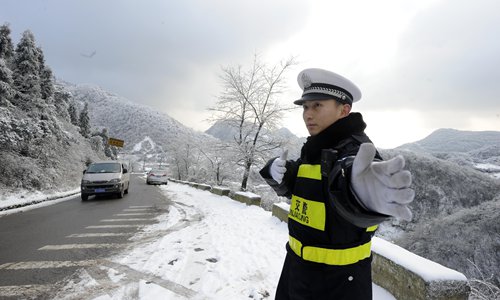 Fugitives and suspects who have managed to hide their identities for years will be caught by police immediately after they come to Guiyang, Southwest China's Guizhou Province, and missing children will be found within half an hour of being reported, thanks to a facial recognition system developed by Guiyang police. The system, which takes advantage of big data, has been of great help to local police in solving cases, security management and offering public services, according to a press release sent to the Global Times by the Guiyang Public Security Bureau. "Using the facial recognition system requires strict authorization to ensure privacy security," a publicity department official surnamed Huang from the Guiyang Public Security Bureau told the Global Times. According to Huang, when the system is used for investigations, only police responsible for a specific case are allowed to check case-related videos with authorization from their superiors. As the country's pilot zone for big data, Guiyang has widely applied the technology in government management, business and daily life. Eyes everywhereAt the heart of the system is a massive LED screen 22 meters in width and 5.8 meters in height showing public areas of Guiyang in real time, and several police in front of the screen watching every detail. The screen captures images of any suspects once they arrive in Guiyang, and then automatically reports them to the police command center which immediately allocates nearby police to make the arrest. The whole process from detecting to apprehending suspects usually takes less than two minutes, according to Guiyang police. The system has a 90 percent accuracy rate in identifying suspects, and police are able to collect facial information from over 10,000 public areas in Guiyang. "Guiyang has 'Skynet' everywhere. No matter where you go, there are eyes on you," said Li Bin, an official with the information communication department of Guiyang Public Security Bureau, according to the press release.Skynet refers to the facial recognition software used in China as an advanced security tool to identify targeted figures. Li said that the system utilizes high-definition images that can be used both in the day and at night, and helped to catch nine fugitives during the Spring Festival holiday. While proving efficient at cracking down on criminal activity, the system has also been used to serve the public. The command center of Guiyang Public Security Bureau launched the system to give orders to community policemen after a 4-year-old boy was reported missing in February. The boy was found and returned to his home by police in under half an hour. Xu Yan, the director of the command center, said that previous searches for missing children required the mobilization of family and friends, which had a limited effect, but that task is now handled by the system, according to the press release. In 2017, the facial recognition system was used about 1,000 times and helped police apprehend a total of 375 suspects, including 39 fugitives. The facial recognition system will also have a wider application in the future. Li said that when residents apply for certain certificates at community service centers, they will not need to fill in information or provide many materials, and will be able to receive their certificates simply by showing up. The system has played an important role in maintaining social stability and security, providing early warnings for key sites and departments, improving the working efficiency of police and helping social management, according to the press release. Safety firstWestern media has been giving intensive coverage to China's "Skynet" project and criticized Chinese police for infringing on human rights and stepping up controls over civilians. Huang denied those accusations, saying that all surveillance cameras are installed in public areas, adding that the purpose of the facial recognition system, which is used for solving cases, administrative management and serving the public, is to ensure the safety of citizens. "These accusations show that Western countries have double standards towards China when surveillance cameras are installed everywhere in their countries," Zhao Zhanling, a legal counsel with the Internet Society of China, told the Global Times. Zhao said the system serves to improve the accuracy and efficiency of police work, and does not infringe on people's privacy and human rights, as facial information is only collected in public places.