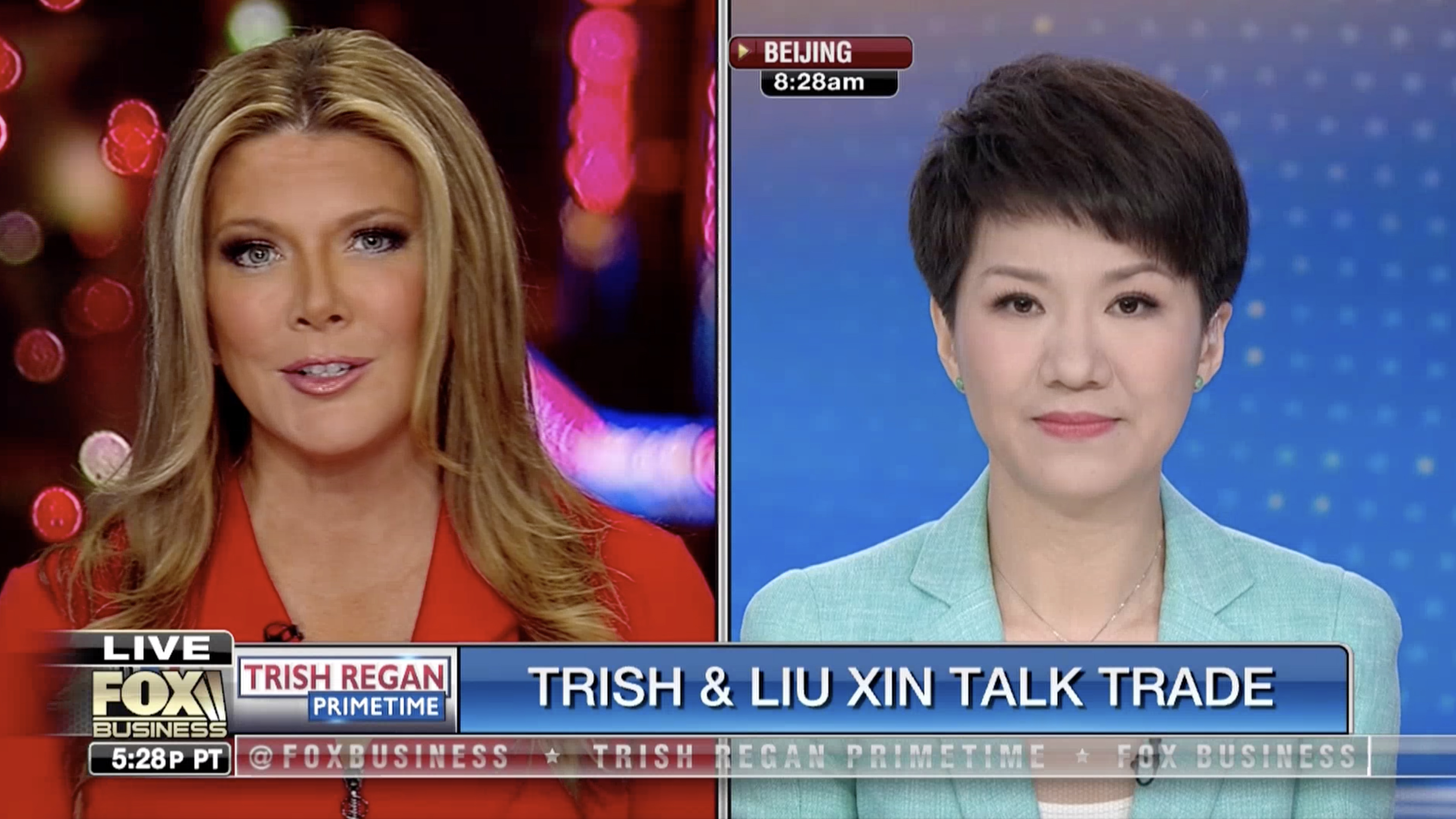 The faceoff between two female anchors – Liu Xin with CGTN in China and Trish Regan with Fox Business in the U.S. – made headlines around the world. The “historic first” happened in the midst of a full-blown trade war and a landmark shift in Washington's policy toward Beijing. With China's ascension, which the U.S. perceives as an economic and even security threat, the four-decade engagement policy between the two is in jeopardy.

As trade talks between the top two economic powers stall and Chinese tech firms are being ostracized by the U.S., bilateral tensions are riding high. Liu and Regan weren't only the first two hosts from China and the U.S. to engage in a live debate in television history, but also discussed the nuances of a global gridlock between the two countries.

We take a look at the facts the two hosts used to make their points during the exchange.

How do American businesses operate in China if they're at risk for having their property, their ideas, their hard work stolen?

Liu Xin: As far as I understand, many American companies have been established in China, they're very profitable and the great majority of them, I believe, plan to continue to invest in China and explore the Chinese market. U.S. President Donald Trump's tariffs make the future a little uncertain.

I do not deny that there are IP infringements, there are copyright issues or piracy or even theft of commercial secrets. I think that is something that has to be dealt with, and I think the Chinese government, the Chinese people and me as an individual, I think there's a consensus because without the protection of IP rights, no country, no individual can be stronger [nor] can it develop itself.

And of course there are cases where individuals, where companies go and steal, and I think that's a common practice all over the world, and there are companies in the United States who sue each other all the time on infringement and IP rights. You can't say simply because these cases are happening, that America is stealing, or China is stealing, or the Chinese people are stealing.

Fact check: China has stolen hundreds of billions of U.S. dollars worth of intellectual property. According to the independent Commission on the Theft of American Intellectual Property, China's theft of counterfeit goods, pirated software, and trade secrets cost between 225 billion and 600 billion dollars annually.

Trish Regan: You mentioned something pretty important, which is that you should pay for the acquisition of that (IP). I think that the liberalized economic world in which we live has valued intellectual property and it's governed by a set of laws. So we all need to play by the rules and play by those laws if we're going to have that kind of trust between each other. At what point will China decide to abandon its developing nation status and stop borrowing from the World Bank?

Liu Xin: We want to grow up, we don't want to be dwarfed or poor, underdeveloped all the time. But it depends on how you define developing country. If you look at China's overall size, the overall size of the Chinese economy, yes we are very big, the world's number one. Don't forget we have 1.4 billion people, that is three times the population of the U.S.

So If you divide the second largest economy overall in the world, basically when it comes down to per capita GDP we are less than one sixth of that of the United States, and even less than some other more developed countries in Europe.

Trish Regan: In 2016, the average tariff that was charged on an American good in China was 9.9 percent. That was nearly three times what the U.S. was charging. So what do you say about this, what do you think about saying "hey, to heck with these tariffs, let's get rid of them altogether." Would that work?

Liu Xin: If you want to change the rules it has to be done in mutual consensus. Basically when we talk about tariffs, it's not just between China and the United States. I understand if you just lower tariffs between China and the United States, the Europeans will come, the Japanese will come, the Venezuelans will probably come and say we want the same tariffs. You can't discriminate between countries.

Now things are different, yes, I agree, 20 years later, what are we going to do? Maybe these old rules need to be changed. You know what, let's talk about it, let's do it according to the rules, the same rules, but if you don't like the rules then let's change the rules, but it has to be a multilateral process.

Fact check: When Regan says that the "average tariff" that China levied on the U.S. in 2016 was almost three times that of the other way around, she may have been talking about the bound tariff rate. This rate refers to the maximum tariff that a country can levy on an imported product. For China in 2016, the maximum it could levy on imported goods was 9.98 percent, while for the U.S. it was 3.61 percent, so China's rate is almost three times that of the U.S.

The average bound tariff rate is generally higher for less-developed countries as determined by the WTO. So China, which has a "developing country" status in the world trade body, is allowed to impose a higher upper limit tariff rate on imported products than the more developed U.S.

Liu's "20 years later" most likely means almost two decades since China's accession to the WTO in 2001, which ushered in a "new era of opening-up" for China by allowing it to integrate more deeply with the global economy through trade.

Trish Regan: Your system of economics is very interesting because you have a capitalist system but it's state run. How do you define it?

Liu Xin: We would like to define it as socialism with Chinese characteristics, where market forces are expected to play the dominating or the deciding role in the allocation of resources. For instance, some state-owned enterprises are playing an important but increasingly smaller role, maybe, in the economy.  If you look at the statistics, for instance 80 percent of Chinese employees were employed by private enterprises, 80 percent of Chinese exports were done by private companies, 65 percent of technological innovation were achieved, carried out, by private enterprises. Some of the largest companies affect our lives, for instance some Internet companies or some 5G technology companies.

Fact check: According to Gao Yunlong, head of the All-China Federation of Industry and Commerce, the domestic private sector contributes to 80 percent of jobs and over 70 percent of tech innovation in China.

The Economist also notes that the non-state sector contributes eight out every ten new jobs in China.