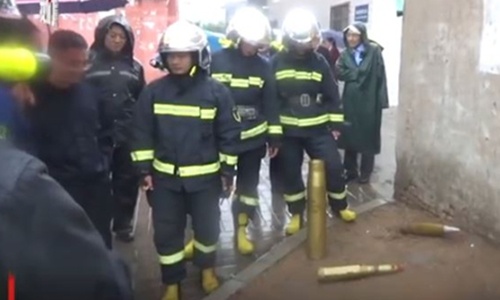 Explosive disposal personnel in Northwest China's Shaanxi Province find the reported two "shells" are just handicraft after disassembling and inspecting them at the scene. (Photo: Screenshot of a video posted by Toutiao News)

After calling in explosive disposal personnel to disassemble and inspect two shells found in a corner of a residential building in Yulin, Northwest China's Shaanxi Province, police found that they were just two handicraft shells, reported Toutiao News on Monday.

The shells were first spotted by a cleaner in a garbage truck while disposing of garbage near a local school, opposite a residential area.

After receiving the alarm, firefighters rushed to the scene along with police, and found two 50 cm long shells complete with wires.

Firefighters immediately cordoned off a 50-meter radius and evacuated the surrounding onlookers, while explosive-removal personnel disassembled and inspected the shells.

However, the shells were found just to be two handicrafts that posed no risk of exploding or any kind of danger after being repeatedly checked.