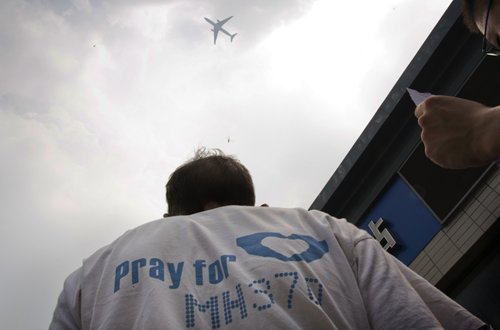 A relative of a Chinese passenger onboard the missing Malaysia Airlines flight MH370 stands near the venue where relatives have gathered to hear the latest investigation report. (Photo: IC)

As summer temperatures in Beijing soar to 38 degrees Celsius, more than 100 families traveled across the country by train for more than 10 hours to Beijing, for a meeting with the head of the investigation team of Malaysia Airline's missing flight MH370.From the very early morning, Jiang Hui's mobile phone was ringing off the hook, mostly from journalists, asking him for a response to the "final report" released by the investigation team.Flight MH370, which was carrying 239 passengers, most of whom were Chinese, disappeared on its way from Kuala Lumpur to Beijing on March 8, 2014. It triggered the largest search in aviation history. In a T-shirt bearing the name MH370, this representative of victims' families answered repeatedly in the sweltering weather, "It is not a 'final report' but rather a 'safety investigation report.'"During the meeting, the head of the investigation team once again clarified that it is not a "final report," which brought immediate applause from all the families present.This is a very crucial point for all Chinese families. "As long as it is not the final report, the search may continue and cannot be abandoned," said Jiang.Chinese families spent nearly one year, relying on the Convention on International Civil Aviation, appealing to the Malaysian government through various channels to get it to abandon the term of "final report" on this document. "Behind every change in their attitude is the painstaking efforts of the families," Jiang told the Global Times.Packed into a small office at the Beijing Shunyi Airport Logistics Park, which handles MH370 issues, family members lodged a protest against the long-awaited report into the disappearance of the flight, saying that it did not provide anything new, and they demanded the search be resumed.The emotional families carried signs asking Malaysian officials not to abandon the investigation and search. An angry chant was raised by the distressed families: "This report is not enough at all! It's fooling everyone here. We need to keep investigating. Keep searching!"