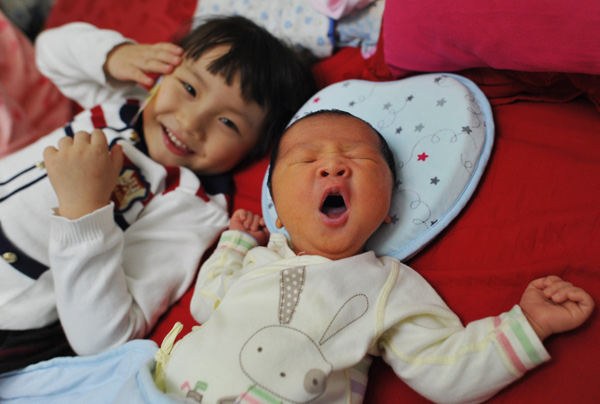 A girl plays with her newborn brother at a hospital in Nanjing, Jiangsu province,on Oct 24, 2014. (File photo: VCG)

A lack of family support and a decrease in career prospects are the top reasons women hold back from having a second child, according to data collected via social media giant Sina Weibo.

Analyses of posts from 2013 and 2018 found that internet users' discussions about having a second child shifted from concerns over economic costs to mothers' worries of not having enough support from their husbands and damage to their careers.

In 2013, a representative post read: "In Shanghai, the birth of a child is followed by further requirements, like a new flat with at least three bedrooms and expensive education expenses, plus care for four parents and a car. It is frightening."

In 2018, however, worries about children's health and whether mothers receive sufficient support from their husbands became major factors in deciding whether to have a second child.

Having a second child has been a hot topic for internet users, especially after the launch of China's universal second child policy in 2016.

"The internet, as a platform for people to express their ideas, lays a foundation for social science research on public perspectives through big data analysis," said Gui Yong, project team leader and researcher from the Center for Communication and State Governance Research.

Further, the analysis found that most bloggers agree that women put more effort into raising a second child and wish that men would take more responsibility for caring for them.

The decrease in births has drawn concerns about it being irreversible. The figures lag expectations at the launch of the universal second child policy, which projected at least 20.23 million new births in 2017 and 19.82 million in 2018.

"The survey reveals some key factors to further improve the implementation of the second child policy in the country, including the reinforcement of family and social support for having a second child," said Huang Ronggui, associate professor of sociology in the sociology department at Fudan University.