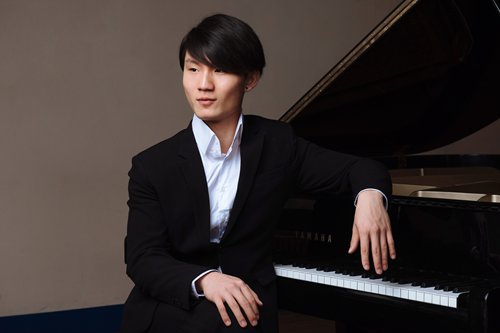 Camera flashes lit up the room as Chinese pianist Niu Niu began playing Felix Mendelssohn's "Rondo Capriccioso, Op 14" at a media event in Beijing as the audience tried to capture every moment of the 20-year-old's performance.The pianist made headlines as a music prodigy more than a decade ago. Better known by his nickname Niu Niu than his given name of Zhang Shengliang, the 1.86-meter-tall musician has grown over the years, not just in technical prowess, but also in his ability to dazzle an audience. "For me, all those labels, 'prodigy,' 'genius' or 'very talented musician,' just motivated me to become a better musician," Zhang told the Global Times on Friday at the event, which saw the pianist sign with Universal Music Hong Kong, the record label overseeing his new album.Set to release in February, the album includes a selection of Zhang's favorite pieces - Romantic period pieces such as Franz Liszt's "Sonata in B Minor," which Zhang said will showcase his growth as a musician.Currently a junior at Juilliard, the young musician is busy balancing his studies with his busy career. Having just finished recording the album in Berlin a few days ago while also dealing with final exams, the young musician was still excited about working with Grammy-winning recording engineer Rainer Maillard for the first time. "It's a real honor to work with such a famous figure. We have many of the same ideas about music," Zhang said. "Recording went smoothly, wrapping up within a day and a half."'An ordinary person'The new album is not Zhang's first, the veteran pianist has already released six albums to date.Born in Xiamen, East China's Fujian Province, in 1997, Zhang began playing the piano at age 3 and held his debut recital when he was 6. In 2005, the 8-year-old made headlines after he was admitted into the Shanghai Conservatory of Music - the youngest student in the school's 85-year history. At the age of 10, Zhang signed a recording contract with classical music label EMI Classics (now Warner Classics), kicking off his career as a professional pianist who jumped between album recording and performing concerts around the world in countries such as Japan, Germany and Britain."My talent did not give me a shortcut to success, but instilled in me a greater responsibility to try to make a difference with my music," said Zhang, adding that he is always impressed by the strong emotional impact music can have on people. He recalled a time when he was touring with a local orchestra in Japan, he heard the sound of people quietly crying from not only the audience but also members of the orchestra as he performed an encore during their last concert of the tour. He soon became red-eyed himself as he continued playing.  "I felt the power of music," Zhang recalled. According to some media reports, Zhang only practices three hours a day. However, the pianist immediately denied that this was the case."Maybe at the time I did say that I didn't spend too much time practicing, but frankly I now practice five to six hours a day on average," said Zhang, adding that practice nowadays isn't just about sharpening his technique, but more importantly getting a feel for the music."For example, I managed to learn how to play a 30-minute concerto in three days, but to truly be able to present it in its most ideal form takes time and patience to really feel it, just like painting or sculpting," Zhang told the Global Times.Despite all his achievements, the young musician stressed that he is no different than any other person his age. A lover of hip-hop music and electronica, Zhang believes a musician should know a bit about everything.Finding a balanceUnlike the generation of young Chinese pianists in the 1990s who shot to fame overnight after taking part in international competitions, such as Lang Lang and Wang Yujia, Zhang has only taken part in a few such competitions. "I don't deny that these competitions can be valuable, but I've focused on improving myself by performing at concerts, which puts one under no less pressure than a competition," Zhang said, going on to emphasize how much the audience's reactions and critics' reviews matter to him.He did admit though that sometimes critics can be "tricky," especially Western reviewers, who tend to complain that Chinese pianists focus too much on technique instead of emotions and lack personality. "Even when some of my friends play wonderfully, the reviews can still be bad," he noted. "But in my opinion, technique and emotions serve each other."Zhang pointed to Wang as an example of a musician who he feels gets this balance right. Zhang noted that she has a very strong character, which he feels is key to becoming a very successful musician. "She has very clear ideas about music," he said.As for Zhang, he is trying to move past his label as a "child prodigy." "What's most important now is that I stay true to myself and bring the most sincere music to my audience," he said.