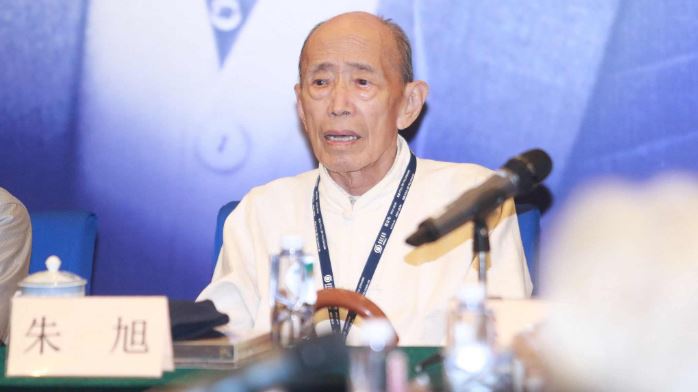 Zhu Xu, a renowned performing artist of Beijing People's Art Theatre, died at 88 due to illness on September 15, 2018.

Born in Shenyang, Liaoning Province, northeastern China in February 1930, Zhu Xu studied drama in North China University and worked as an actor at the art ensemble in the university following his graduation. In November he became the actor of Drama troupe in Central Academy of Drama.

Zhu Xu was only 22 when he entered Beijing People's Art Theatre, where he spent his drama life for more than 60 years.

On the stage of Beijing People's Art Theatre, he dedicated dozens of unique and colorful drama characters, leaving deep impressions on audiences. Zhu Xu played in countless dramas home and abroad, such as Wei Moxiang in the "Salesgirl", Master Jacques in "The Miser", Ah Q in "The Story of Xianheng Hotel", Charlie in "Death of a Salesman", etc.

At the age of 82, Zhu Xu still played in the "Jiazi Yuan" on the stage to celebrate the sixtieth anniversary of Beijing People's Art Theatre. "Jiazi Yuan" is a drama that tells a story about a girl who studied abroad but returned home when her father died. The girl wants to quickly sell the house that has been in her family for generations, thus unexpected conflicts occur. That was his last performance before he retired.

Aside from dramas, Zhu Xu also impressed people with his numerous films. He first screenplay was a movie created in 1984, when he was 54. He starred in films such as Girl in Red, Gu Shu Artist, Lane Celebrities, Bell Ring in Chiang Liang Temple, Sunset of Forbidden City etc.

His performances has helped him gain not only the audience's praise, but also won him  numerous domestic and international awards in drama, film, and Television. Zhu Xu was awarded the first prize by the Ministry of culture for his charming performance in the drama "Red and White" in 1984, and in 1991, he won the Golden Lion Award.

In 1996, he received Best Actor Award from the Japan Broadcasting Cultural Foundation and the Galaxy Award from NHK for Son of the Earth. Due to his excellent performance in the film "Scraping", he also won the Best Actor Award at the Tokyo International Film Festival.

He has also won many titles and awards in the new era such as the title of "100 Excellent Actors in Chinese Films" in 2005 and the twenty-eighth China Film golden rooster prize jury special award, etc.

Even though he was retired, he was highly concerned about drama development in China, and he was devoted to performance and guidance whenever he was needed by Beijing People's Art Theatre.

As he put it, "A good actor ultimately rests on his own literary and artistic accomplishments ". He kept reading and sharing his theory and experiences in performance via books. He was also keen on playing chess, singing Chinese operas, making kites and Chinese calligraphy.

Zhu Xu is the third well-respected Chinese artist that passed away in September 2018, following Shan Tianfang, the legend teller of China's Pingshu, who passed away on September 11, and Chang Baohua, one of the sixth generation of well-known Chinese Xiangsheng, or crosstalk actors that left us on September 7.