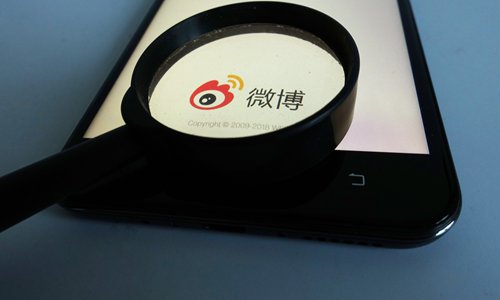 The post announcing Huo would close his account on September 12 said that Huo wanted to communicate with fans through his films and TV dramas, and did not give any other reason.

Netizens attributed the closure to cyber bullying. Huo has been recently under attack for his acting skills in a costume drama. Fans of Huo and his wife, actress Ruby Lin from Taiwan, have frequently posted bitter and negative comments since the pair of celebrities announced their relationship in 2016.

Lin, who has 76 million followers, still posts regular updates on Weibo, but the Global Times found on Tuesday that she has banned comments. The comment section is where most cyber bullies post abusive words.

Prior to Huo, several Chinese celebrities have either deleted all their Weibo posts or simply quit Weibo after being bullied online.

Observers believed that celebrities can easily become targets of cyber bullying because what they do and what they say are closely followed by the general public. Their passive reaction of simply retreating from social media cannot stop the phenomenon of cyber bullying.

Zhang Zetian, wife of the Chinese e-commerce giant JD.com founder and CEO Liu Qiangdong, deleted all her Weibo posts in January 2015, after her relationship with Liu was revealed.

"I did nothing to deserve the defamation and insults I suffered all these years," Zhang said on Weibo before she deleted all her previous posts. "[I am] defending my rights to live a normal life as a 21-year-old girl."

Zhang started posting again in April, but so far has only posted five times.

Her latest post on May 31, about a book award ceremony, drew 19,268 comments as of Tuesday. Many comments were complaints about JD.com "cheating consumers" in its sales promotions. Some even lashed out against Liu with insulting language about a sex harassment scandal he was involved in.

Zhang rose to fame on the Chinese internet in 2009 after a photo of her holding a cup of milk tea went viral. She was then called China's "sister milk tea."

Another Chinese actress Yao Chen, one of the most influential celebrities on Weibo with 80 million followers, only resumed her Weibo in July with the comment function still closed off. She stopped updating her Weibo in 2017 when loads of Chinese netizens criticized her for supporting refugees from the Middle East to come to China.

Yao, a UNHCR goodwill ambassador, denied that she had said anything about China welcoming worldwide refugees. However, the comment section of UNHCR's Weibo account is full of criticism against her.

Other Chinese celebrities closed their Weibo accounts after being harassed online, included Jing Boran, a Chinese actor who quit Weibo in 2016, after waves of netizens denounced him for not posting condolences on Weibo after the death of another Chinese actor, who was Jing's close friend.

It's quite normal that celebrities' actions and words arouse controversy among the public, and they should accept public supervision, since the public gives them their fame and fortune, Zhao Zhanling, a legal counsel of the Beijing-based Internet Society of China, told the Global Times on Tuesday.

"However cyber bullying with defamation and the fabrication of facts has infringed on celebrities' right to a good reputation, and they have a right to file lawsuits," Zhao said.

In practice, some celebrities, trying to avoid antagonism with the public, ignore cyber bullying, but this approach can not reduce the problem, said Zhao.

Celebrities can report some abusive comments to the social media platform, asking for their deletion, according to Zhao.

The social media service providers' reaction to the cyber bullying of celebrities is complicated. On one hand, controversy means traffic, on the other hand, they fear legal liability, Wang Sixin, a professor at the Communication University of China in Beijing, told the Global Times.

It's difficult for social media platforms to detect abusive comments because they only review posts containing sensitive words. Reviewing all posts in real-time means a good deal of work, Zhao said.

Social media platforms have to avoid promoting topics involving cyber, bullying posts in a timely manner, and even close the accounts of cyber bullies, Wang said.