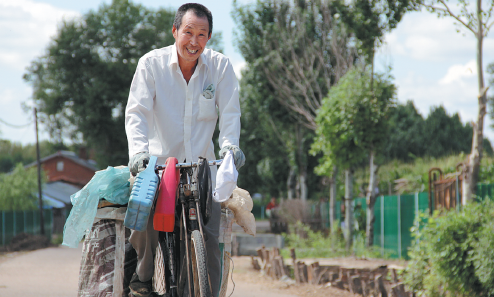 For the past 20 years, Wu Chunyang has collected plastic trash, picking up 100 metric tons of it from around the village he lives in.

The 68-year-old farmer, who is from Xingfu village in Yian county in northeastern China's Heilongjiang province, began the additional work because of an incident in 1999.

A pig that he raised died suddenly and almost all the villagers believed that the death was caused by swine fever. When he dissected the pig to check whether it could be eaten, he was shocked to see what was inside its stomach. "Its stomach was full of plastic film," Wu said. "I wasn't sure if the plastic was the real cause of its death, but I believe that plastic must be a bad thing.

"At that time, the environment in rural areas was terrible, especially white trash such as plastic film and pesticide bottles which could be seen everywhere. However, I just considered it a bit dirty and knew little about the dangers of 'white pollution'."

After that, Wu began to collect white trash around the five villages near his home in his spare time with a modified bicycle capable of carrying more weight.

"From the newspapers, TV and internet, I found a lot of information about the harmful effects of white trash. It can not only pollute the air, earth and water, but it is also a fire hazard," he said. "I also understood from a television documentary that white trash will not decompose even after hundreds of years."

"The cultivated land polluted by white trash must have a strong impact on the crops, which means that people who eat the crops will be harmed," he said. For Wu, food security is the most important thing to a farmer who provides food for others.

In the past 20 years, he has cycled more than 130,000 kilometers and replaced seven bicycles that have broken due to frequent use.

Furthermore, he walks several kilometers every day to collect white trash littered around the villages, and can walk more than 10 km a day at times.

Sometimes, he has encountered difficulties along the way.

Once, he rode to a village more than 10 km away to collect white trash, and a bicycle tire became flat on his way home. "It was already 8 pm and I failed to repair it in the falling rain," he said. "I had to push the bicycle with a full load."

He spent four hours on the 15-km route and was soaked through when he arrived home.

However, Wu never complains about the hard and dirty work. On the contrary, he said he enjoys riding around the beautiful countryside.

Wu is a warmhearted man and often offers his help along the way.

From helping to repair bicycles to pushing out cars stuck in the mud and trying every way to find the owners of lost valuables that he has picked up, Wu seems quite busy on his way to collect white trash.

He also volunteers to supervise and publicize environmental protection among neighbors and people from nearby villages.

In order to increase their awareness of environmental protection, Wu has given speeches in different communities.

He has received praise from the villagers, but what makes him happier is the great changes that have taken place in recent years.

"With the joint efforts of the locals and the government, the environment has greatly improved," he said. "Now, we all live in neat brick houses and the country roads are wide and flat.

"There is a dustbin every dozen meters, which makes the village as clean as cities. Moreover, more villagers, especially more young people, have joined my team."

The villagers' environmental awareness has greatly improved, resulting in a new, civilized rural way of life.

Wu seems likely to lose his job soon. "It will be good news when I don't need to go out to collect trash one day," he said.

Influenced by their father, Wu's children also stick to the family tradition of helping others.

Wu Kui, his son, a doctor at the infectious diseases department of the People's Hospital of Manzhouli in northern China's Inner Mongolia autonomous region, has joined the local volunteer association since he started work in the city.

"In my spare time, I will go to the kindergartens, schools, nursing homes and communities to increase my common medical knowledge of those in need," Wu Kui said. "My father is the person that I respect the most in my life. I hope to help as many people as possible."