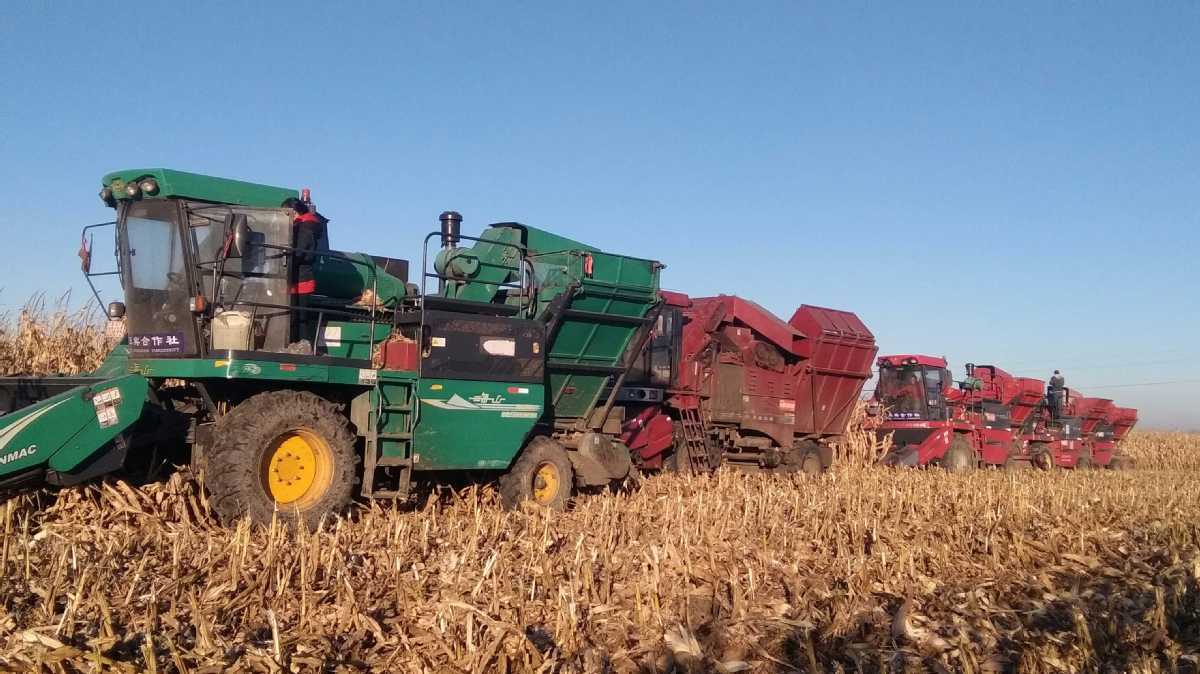 With spring temperatures on the rise, farmers in Northeast China are welcoming the busiest spring plowing season.

However, in Sangang, a town in Nongan county of Changchun, the capital city of Jilin province, many no-tillage planters can be seen busily planting on the maize-straw-covered fields, instead of lots of farmers sowing by hand.

In recent years, after the harvest, farmers in Sangang chose to leave the crushed maize straw covering the fields instead of burning it.

Maize straw has become the "superstar" in Sangang after the practice of returning straw stalks to the field boosted the incomes of villagers and helped to improve the quality of the farmland.

"Nongan, an agricultural county where most farmers plant maize on the fields, is often hit by spring droughts that have a great effect on spring plowing," said Chang Yabin, head of Yabin Specialized Agricultural Machinery Cooperative. "The practice of returning straw stalks to the fields can well retain soil moisture and ensure the success ratio of seedlings."

"Furthermore, the practice can protect the black soil and reduce the environmental pollution caused by burning straw stalks," he added.

Chang, 55, a local farmer who established the cooperative in Sangang in 2013, is the pioneer who promoted the innovative no-tillage and stalk-covering methods in the county.

"I have planted maize for more than 35 years," he said. "In Sangang, there are a total of 15,000 hectares of cultivated land, most of which is saline-alkali and low-lying. The soil on the land is hardened, high in salinity and alkalinity, and poor in terms of permeability."

"Before 2013, in spite of an increasing reliance on chemical fertilizers, we could only see an output of 5,000 kilograms per hectare," according to Chang.

"However, thanks to the practice of returning straw stalks to the field, output has now doubled. The practice also helped to reduce chemical fertilizer usage from 1,000 kg per hectare to around 750 kg," he said. "I believe we can see a sustained decline as the quality of the black soil continues to improve."

Almost all of the 9,000 hectares of maize farmland at the 14 villages of Sangang will be planted using no-tillage and stalk-covering methods this year.

However, it took Chang several years to persuade the villagers to change their traditional tillage methods.

"Around 2012, technical staff from the county's and the town's agricultural departments began to introduce conservational tillage to farmers across the county," Chang said. "It got known that it was a major measure to protect black soil, and a major strategic measure to maintain the green and sustainable development of agriculture."

"These methods can reduce the loss of soil moisture and increase the content of organic matter in the soil," he said. "Therefore, I began to use no-tillage planters under the guidance of the technical staff when my cooperative was founded in the spring of 2013."

At the same time, Chang visited farmers in nearby villages to introduce his experience in order to help them benefit from it too.

"Farmers are reluctant to change, especially older ones who have been deeply influenced by traditional farming methods with a history of thousands of years," he said. "They insisted that the fields must be clean and tidy after harvesting while fields with maize straw left on them would make them look really lazy."

In 2018, a heavy spring drought hit Nongan, and had a serious impact on the success ratio of seedlings, except for those at Chang's cooperative.

"We had a high ratio of seedlings on the fields that used the method of conservational tillage while other farmers had to reseed their fields," he said. "Then I found more nearby farmers began to accept these new methods."

Since 2011, Changchun has arranged 10 million yuan ($1.54 million) of special funds to support conservational tillage in the city.

A total of 100 demonstration areas have been set up across the city.

The areas, each of which has an area of more than 100 hectares, can provide a platform for local farmers to visit, study and exchange experiences.

In December 2020, a national demonstration area for black soil protection and utilization was set up at Chang's cooperative, which made him firmly determined to protect the black soil.

This year, the cooperative will manage more than 700 hectares of maize farmland for 600 families.

"Farmers can pay 1,750 yuan per hectare for the service, which includes plowing, planting and harvesting," he said, adding that planting work was expected to be finished before May 20.

"With great support from the government and trust from the farmers, I believe we will see a good harvest in the autumn," he said.