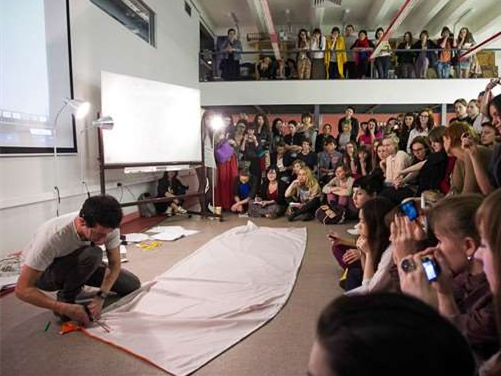 GUANGZHOU, March 24 (Xinhua) -- In a red European-style villa in the southern Chinese metropolis of Guangzhou, Zora Gerault is teaching her Chinese students how to tailor clothes the way a French designer does.

She is the director of ESMOD Guangzhou, a Chinese branch of the renowned fashion design school established in 1841. Based in Paris, ESMOD now has 20 branches in 13 countries and regions, including two in Beijing and Guangzhou respectively.

In 2014, ESMOD partnered with Guangzhou Textiles Industry & Trade Holdings LTD to open a fashion design school in Guangzhou, aiming to train talent with a fashion sense of both the East and the West.

"France wants its fashion ideas and skills to be spread worldwide, while the booming Chinese fashion industry needs top talent. The coincidence of our demands leads to cooperation," Gerault said.

"So we started ESMOD Guangzhou, using French design concepts to nurture new Chinese designers," she said. "In this way, I think fashion cultures of the two countries are connected."

So far, four classes of students have graduated from the school, with many becoming independent designers or executives at fashion companies, or even founding their own clothing brands.

The works of Guo Ziqi, one of the top students, were showcased during the Paris fashion week in 2016 when she graduated from the school. Now, she is preparing for another trip to one of the most important stages of the fashion world.

She said what impressed her most during the study at ESMOD were the creativity in its course design and superb skills of French garment making.

"In the class, French teachers always encouraged us to use different materials such as plastic and paper to make clothes, to open our minds," Guo said.

According to Gerault, an important goal of her school is to inspire students to explore a new way of expression that combines traditional Chinese art with western skills.

"In our class, we are devoted to teaching students to use French technology to express Chinese ideas and culture," Gerault said.

"ESMOD Guangzhou is not just a school for fashion, but also contributes to Sino-French cultural communication," Gerault said. "I believe in the future there will be more and more opportunities and practices for this kind of communication."

A famous fashion designer of her own, Gerault has been working and living in China for nearly 12 years and developed a habit of drawing all the Chinese cultural elements that attracted her. Now, she has a thick notebook full of what she considers cultural treasures.

In the meantime, she has also witnessed the rapid development of China's fashion industry and its growing presence on the world fashion stage.