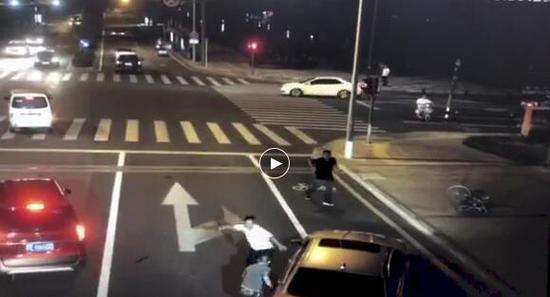 Photo: A screen shot from a video showing the knife attack at Kunshan.

A controversial knife attack in East China's Jiangsu province was ruled justifiable defense for a man who stabbed another to death following a traffic spat on Monday.

A notice by Kunshan's people's procuratorate says Yu Haiming was exempted from criminal responsibility on Saturday.

The attack left another person injured and generated heated discussion among both general public and lawyers, Beijing News reported.

As per a surveillance video, at 9:37 pm Monday, the traffic light was red for vehicles going straight at the crossroad of Zhenchuan road and Shunfan road. A black BMW sedan abruptly turned right, attempting to enter the non-motorized vehicle lane and appeared to have collided with a bike.

A man, surname Liu, stepped out of the car and pushed over and kicked the bike rider Yu, at 9:38 pm. Forty-seven seconds later, Liu got a knife from the car and wielded it at Yu and Yu dodged.

Later, the knife fell from Liu's hand and Yu grabbed it. Yu stabbed Liu in the belly twice and Liu fell to the ground. As Liu tried to get up, Yu slashed Liu three times more. Liu ran toward his car and Yu attacked Liu twice again.

A witness said Yu went back to the car, looking shocked and nervous. Yu didn't let go of the knife until police arrived, the witness said.

Kunshan police announced on Tuesday that the two were sent to hospital. Liu, 36, died while Yu, 41, had no life-threatening injuries. Yu is under police detention.

Whether Yu's act was justifiable defense or unjustifiable self-defense and whether he should bear criminal responsibility has caused heated discussion among lawyers and netizens.

First, the dispute between Liu and Yu was not civil dispute because Liu kicked and wielded knife at Yu rather than apologizing after forcing the car into non-motorized vehicle lane, which violated the traffic law, said Ruan. Second, Yu looked scared after Liu grabbed the knife. Considering Liu was aggressive, Yu couldn't exclude the possibility of Liu continuing to look for other tools to fight back.

Ye Zhusheng, lawyer and lecturer with School of Law at South China University of Technology, echoed Ruan's view. The situation after Yu grabbed the knife should be considered as dangerous, so Yu has the legitimate right to defense.

One detail is that rather than stopping his behavior, Liu fought for the knife after the knife fell from his hand. Another detail is that after Liu fell to the ground due to Yu's stabbing, Liu ran to the car rather than other directions. Considering he fetched a knife from the car previously, Yu had reasonable ground to believe that Liu may be going to fetch other tools from the car to continue the fight, said Ye.

However, Bao Hua, lawyer with Lanting law firm, considered Yu's act as unjustifiable self-defense. It is justifiable when Yu grabbed the knife and forced Liu back with the knife, said Bao. But Yu continued his attack, which Bao believed as intentional injury.

Deng Xueping, lawyer with Capital Equity Legal Group's Shanghai branch, added that Liu was attacked five times before he ran to the car. Even if there were other tools in the car, it's impossible for him to continue the fight. Liu was trying to ran away when he ran to the car, Deng said.

Liu Hailong was born in 1982 in Northwest China's Gansu province. He has been jailed several times on charges including robbery, blackmail and theft.

He was awarded a Samaritan certificate in March by Jiangsu Justice and Courage Foundation for providing clues to the police to crack a case.

He operates a pawnshop in Kunshan.

Yu is a manager of engineering department in a restaurant in Kunshan. A colleague of him described him as kind, easy-going, optimistic, hard-working and having good relation with other colleagues.

He arrived at 8 am at the restaurant everyday, a hour earlier than the working time, and stayed until 9 or 10 pm, the colleague said.