CHINA Father and son save national treasures in age of restoration

Father and son save national treasures in age of restoration 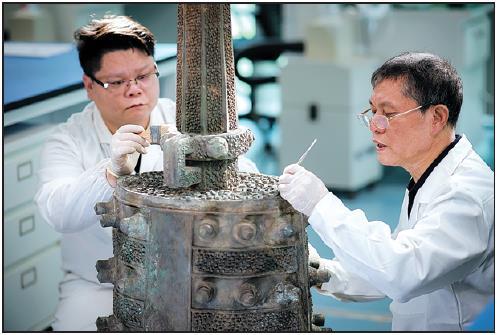 Restorer Fang Guorong (right) passes on his skill to his son, Fang Chen. The duo is working on the restoration of an ancient chime bell at the Hubei Provincial Museum. (Photo: Xinhua)

WUHAN - Five years ago, a documentary series titled Masters in Forbidden City was released in China and soon became a hot topic on social media, bringing the profession of cultural relic restoration into public spotlight.

Given China's long history and rich collections of ancient artifacts from various dynasties, it takes meticulous hands, years of experience and a thorough understanding of history to become a qualified restorer. As backstage heroes, many of them have dedicated their lives to preserving national treasures.

Located by a massive lake and shaded by trees, the Hubei Provincial Museum occupies a corner of tranquility in the bustling city of Wuhan. Inside, Fang Guorong, 62, and Fang Chen, 32, jointly lift a 12-kilogram bronze object in an attempt to restore a huge and ancient bianzhong, or chime bell.

The Fangs, father and son, both work as relic restorers at the museum. The 150-kg chime bell they are taking care of is the biggest and heaviest one preserved there, having been unearthed from a 2,500-year-old tomb in Hubei's Suizhou in 2009.

Chime bells are a percussion instrument that became prevalent in China from the Western Zhou Dynasty (c. 11th century-771 BC). The country's largest set of chime bells ever unearthed was found in 1978, also in Suizhou, in the tomb of Marquis Yi, a ruler of the ancient Zeng State. The set of 65 chime bells has been a highlight of the various collections of the Hubei Provincial Museum.

Fang Guorong has been engaged in the restoration of bronze ware for more than 40 years. He has participated in chime bell restoration projects and has served as the technical director in duplicate projects.

Fang Guorong enjoys it, cherishing every touch of the bells as part a dialogue with artisans from the distant past.

According to Fang Guorong, some of the chime bells found in 2009 were deemed too damaged to be restored, including the heaviest one. Fortunately, in recent years, digital technologies have been applied effectively to the restoration of relics.

"3D scanning and 3D printing are being used to restore the severely damaged and deformed cultural relics. This is something the older generation of relic protection workers couldn't even dream of," he says.

Fang Chen joined the museum in 2014. He has received training from masters like his father and acquired new technologies that his predecessors may have found challenging.

"The restoration work should also keep pace with advances in technology," says the son. "This doesn't mean overturning the traditional methods. It is about combining old and new methods to better protect and restore cultural relics."