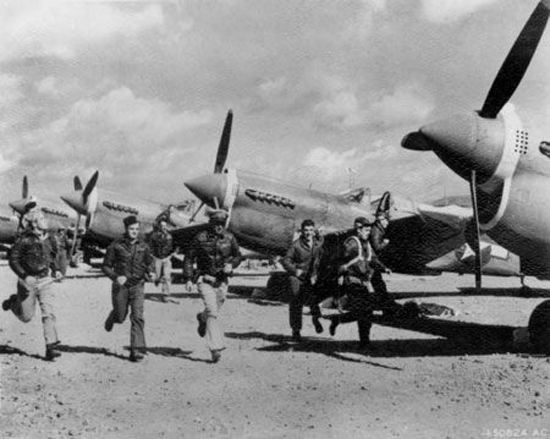 DENVER, the United States, April 15 (Xinhua) -- Far beyond the fields surrounding Kunming in southwestern China, where pieces of Japanese bombers remain imbedded in the earth today, John Yee's impact on world history will be long remembered.

Yee, who passed away at a Denver hospital on March 26, was considered one of the last members of the legendary World War II Flying Tigers who stopped Japan's relentless bombings of Kunming.

War veterans, educators and political leaders honored Yee's life on Sunday at a small chapel in west Denver, where he was remembered as a hero and an inspirational, brilliant educator, who not just helped save thousands of lives in China, but inspired thousands more as a distinguished history teacher in Denver after the war.

"He turned history from a black-and-white experience into color," Mike Coffman said to an overflowing crowd who attended Yee's memorial service.

Coffman, 64, a decorated US Marine and Army war veteran, who served five terms in the US House of Representatives, told Xinhua how his former high school history teacher had influenced thousands of lives - not just as a war hero, but as an educator.

"I just hope my grandchildren find a teacher who inspires them to learn as much as Mr. Yee did for me," said Coffman, choking back tears.

Coffman showed the audience a video of him honoring Yee on the floor of the US House of Representatives in Washington, D.C. in 2014, where he stated - for the Congressional record - that "America needs more teachers like John Yee."

Coffman drew chuckles from the packed funeral hall when he admitted he was a "terrible student who skipped most of his classes" in high school.

"But not Mr. Yee's classes," Coffman said. "I never missed one of his classes. He changed my life."

For this heroism, in 2015, Yee was awarded the Jubilee Medal by the Chinese government at the 70-year anniversary of the victory of Chinese people's War of Resistance against Japanese Aggression.

Yee was the first public school teacher between the two US coasts to teach Chinese language and history in the 1950s. He received Denver's distinguished citizen award in 1961, after a Master's Degree at the universities of Denver and Colorado.

During his lifetime he received dozens of awards as a war hero and teacher. In 2012, Colorado Governor John Hickenlooper, a 2020 presidential candidate, reserved July 17 as "John H. Yee Day."

Before his death, Yee jokingly told Xinhua that he was one of the last of the Tigers, "simply because I have outlived the rest."

Yee lived through one of the most pivotal times in world history, and explained the intricate themes and dynamics of world politics to his students, Coffman told the audience.

Yee was adopted as a toddler in 1923, at a time when China had slipped into a dangerous, feudalistic state controlled by powerful warlords.

His British Methodist missionary parents came to China in 1902 and gave their only son an advanced Western education that landed him a translation job with the Tigers, and later vaulted his career as a Denver teacher and college professor from 1955 to 1980.

"We mourn the loss of John Yee today not just because he was a was a man of integrity, valor and courage, but because we have lost a piece of living history," said Yee's biographer, journalist Peter Mertz.

Mertz, whose grandfather was a US Army engineer serving under General Joe "Vinegar" Stilwell to rebuild the Ledo Road into China, told the audience that Yee, who served under Gen. Claire Lee Chennault, changed world history.

"The Japanese war plan was to cut off and take Kunming, then Chongqing, then Chengdu," Mertz told those assembled. "Then checkmate - China would have fallen - and the world would look much different than it does today."

"But that did not happen - thanks to men like Chennault and Yee," Mertz added.

US President Franklin Delano Roosevelt (FDR) formed the American Volunteer Group (AVG) by a secret order in 1941 as a way to stop Japan's attempt to conquer China.

"If your neighbor's house is on fire, then you lend him a water hose to put it out," Yee explained in an interview last year, of FDR's move.

The fighting force of 300 included mechanics, doctors, nurses, and other personnel, and used fake passports to sneak into Myanmar as tourists in early 1941.

Chennault commanded his pilots to use a radical strategy of air combat - diving, shooting and avoiding dog fights - against the more maneuverable Japanese Zeros.

The next day, Japan's horrific bombings of Kunming would end forever.

Dec. 20, 1941. Together, the United States and China were ready for this wave of bombers. On that day, 13 Japanese planes fell from the sky to only one American fighter.

A reporter for the Kunming paper said the Americans looked like tigers, flying in the sky. And the legend was born.

For the next six months, Yee helped the Flying Tigers record the most lopsided victories in aviation warfare history - 296-14, according to historynet.com.

On July 4, 1942, the AVG was absorbed into the US 14th Air Force, with Chennault in command, considered one of the most brilliant military minds in US history.

Yee led a unique life, coming to the United States in 1944 to watch the country dominate the 20th century, and his native China rise from the ashes of feudalism to one of the strongest countries in the 21st century.

As part of FDR's Lend Lease, Yee came to America for advanced training, but he contracted tuberculosis, was hospitalized, and on a lark, he wrote a letter to US President Harry Truman requesting to stay in the United States.

Months later, Yee was sitting in Northern California waiting for a ship back for Shanghai. The night before his departure, the reply came from Washington. Truman told Yee he could stay.

"East-and-West, Yin and Yang," Richard Yee, 59, told the audience, how his father had been raised, and educated by British missionaries, and thereby had gleaned a deep understanding of world philosophy, religion, and history.

Johnson detailed Yee's devotion to diplomacy and building bridges between the United States and China that dominated the last decades of his life.

After he retired, Yee took groups of students and teachers to China on a frequent basis with his wife of 45 years Nai-Li. Into his nineties, joined the chorus demanding Japan to apologize for the atrocities committed in WWII.

In 2016, Yee published an open letter to Japanese Prime Minister Shinzo Abe requesting that Japan acknowledge and formally apologize for the millions of Chinese people murdered during Japan's brutal occupation of China from 1931-1945.