SUBOTICA, Serbia, Sept. 24 -- A play called "24 Grandmothers" staged by the Chinese Xi'an Children's Art Theater won the hearts of Serbian children and parents on Monday at the National Theater here. 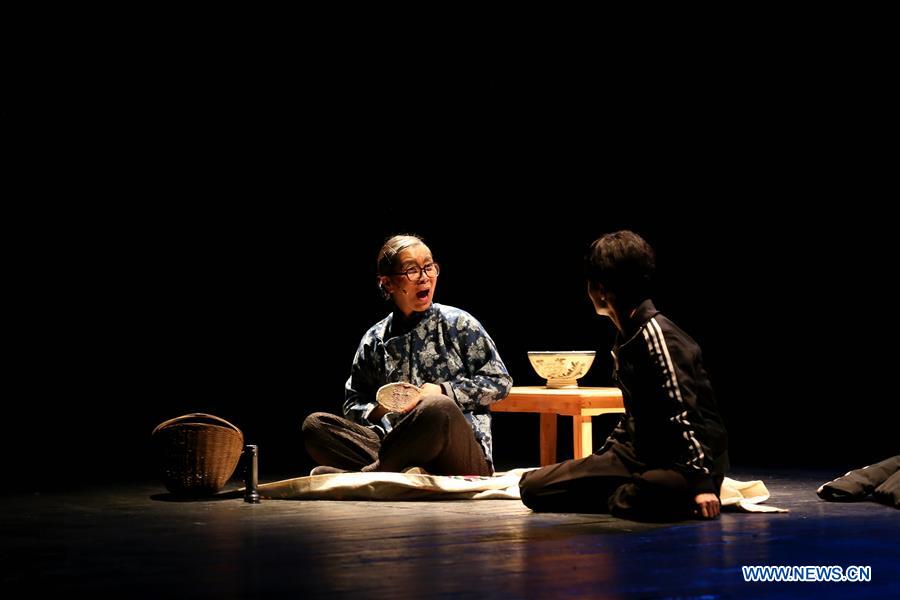 Chinese children's play "24 Grandmothers" performed by Xi'an Children Art Theater premieres in Subotica, Serbia, on Sept. 23, 2019. The play, depicting family relations through a child and a grandmother to show the collision and communication between tradition and modernity, won the hearts of Serbian children and parents at the 2019 International Children's Theater Festival. (Photo: Xinhua)

As part of the 26th Subotica International Children's Theater Festival held from Sept. 22-27, the Xi'an Children's Art Theater presented to local audiences the essence of traditional Chinese culture through a story about the increasing affection between a boy and his grandmother.

Audiences carefully followed the story of six-year-old Xiang Xiang, a sickly boy whose busy parents sent him to northwest China's Shaanxi Province to be looked after by his grandmother.

After his initial rebelliousness and distaste for rural life, the little boy gradually develops a deep affection for his grandmother and his roots, while his grandmother teaches him the 24 solar terms.

The play reveals family ties that are very similar to the ones in Serbia, said Miroslava Babic, a member of the city council in charge of culture, adding that it emphasized how grandparents play important roles in many people's childhoods.

She said that she was interested in learning about the Chinese language and culture here in Serbia, and managed to learn a lot from the play.

"This performance was really excellent -- the music, the actors, the story and the way how it was told to the public," she said and thanked the Chinese company for participating in the festival.

Ilija Tatic, director of the Open University in Subotica, praised the play's uniqueness, regarding it as a novelty at this festival and in Serbia as well.

"I think the performance ... was really strong artistically," said Tatic. "It is a great story with very nice lightning effects and different techniques."

Similarities in family relations depicted in the play make it easier for the Serbian children to understand, Tatic said, adding that the story can work well in many other different cultures.

"This is really a great way to experience the Chinese culture, and for the audience, it is good because they can explore everything, the traditional life, the colors, the Chinese New Year," he added.

The play "24 Grandmothers" competes here at the festival along with 13 other plays from Hungary, Russia, Bulgaria, Germany, Italy, Poland, South Korea, Belgium, Serbia, Montenegro and Bosnia and Herzegovina.

Written by Xuan Yibin and directed by Guo Hongbo, the play was picked from more than 100 applications from drama and puppetry theaters around the world.

"Drama is a common word for the people of the world," said Wang Lihong, general manager of the Xi'an Children's Art Theater Co. Ltd, who at first was worried whether the play would manage to overcome the language gap between the two countries.

"In this children's theater play ... the roles are very simple, and (it) also shows the feelings between the grandparents and grandchildren," she told Xinhua. "I think that all the audiences in Serbia, including the children, have understood it. This makes me really satisfied."

Many of the details in the show have resonated with the parents and children and made them interested in traditional Chinese culture, said Wang. "I think that we have achieved the purpose of cultural communication."

She added that the friendship between China and Serbia could be thoroughly felt here, and she hoped that a good Serbian drama could be presented to Chinese audiences in turn.