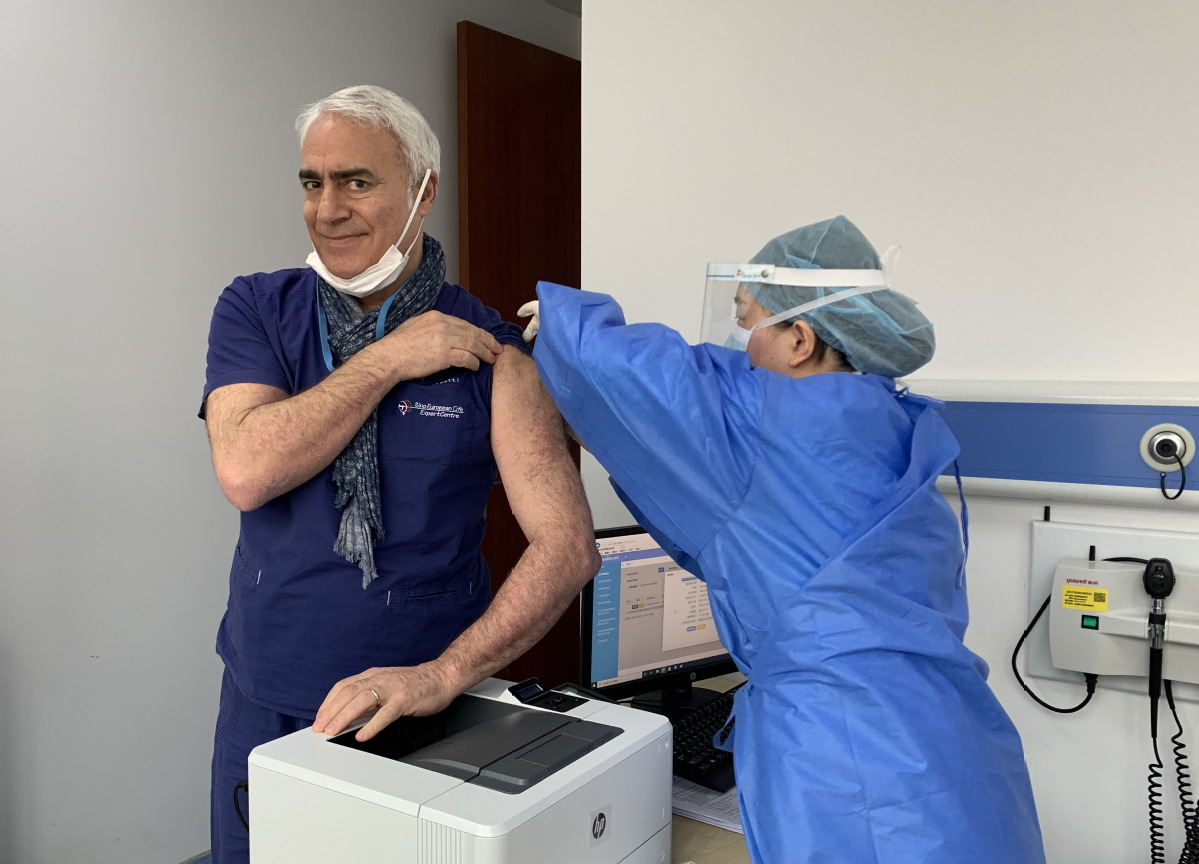 Giuseppe Bigatti, a doctor from Italy and director of the hysteroscopy center of Renji Hospital in Shanghai, receives the first dose of a COVID-19 vaccine in the city in January. He was vaccinated with the second dose in February. (Photo: China Daily)

SHANGHAI, March 30 (Xinhua) -- It took less than a minute for Van Den Broecke, a Belgian resident in Shanghai, to receive his first dose of the COVID-19 vaccine in Shanghai's Tong Ren Hospital.

Monday was the first day that expatriates working in Shanghai could volunteer to get the COVID-19 vaccine simply by making an appointment online.

After being inoculated, Broecke gave the staff a thumbs-up to show his thanks and was guided to a designated area for observation for half an hour in case of any adverse reactions.

"I'm feeling quite good," said Kamran Vossoughi, president and CEO of Michelin China, who also just received his first dose. He said that he is confident in Chinese vaccines as it has been widely applied both at home and abroad.

"I'm happy that it has been offered in China and now to foreign nationals," he said while sitting in the observation area with his wife and four colleagues.

Vossoughi said that he informed all of his fellow expat workers after learning the news, and over 20 people have expressed a desire to be vaccinated.

"The registration is seamless if you have your ID documents," he said, adding that he was also impressed by the bilingual services at the vaccination site.

Foreigners who have opted into the local health insurance program can receive the two-shot vaccine free of charge just like Chinese nationals. Otherwise, they can get the vaccine at 100 yuan (about 15 U.S. dollars) per dose, which Vossoughi believes is "completely affordable."

Having been in Shanghai for nearly two years, he is deeply in love with the city, but still, he misses home and hopes to reunite with friends in France before long.

"Now that the vaccine is in place, I hope in the coming months more and more people will be vaccinated," he said. "And we (hope that) borders open, and everything goes back to normal."