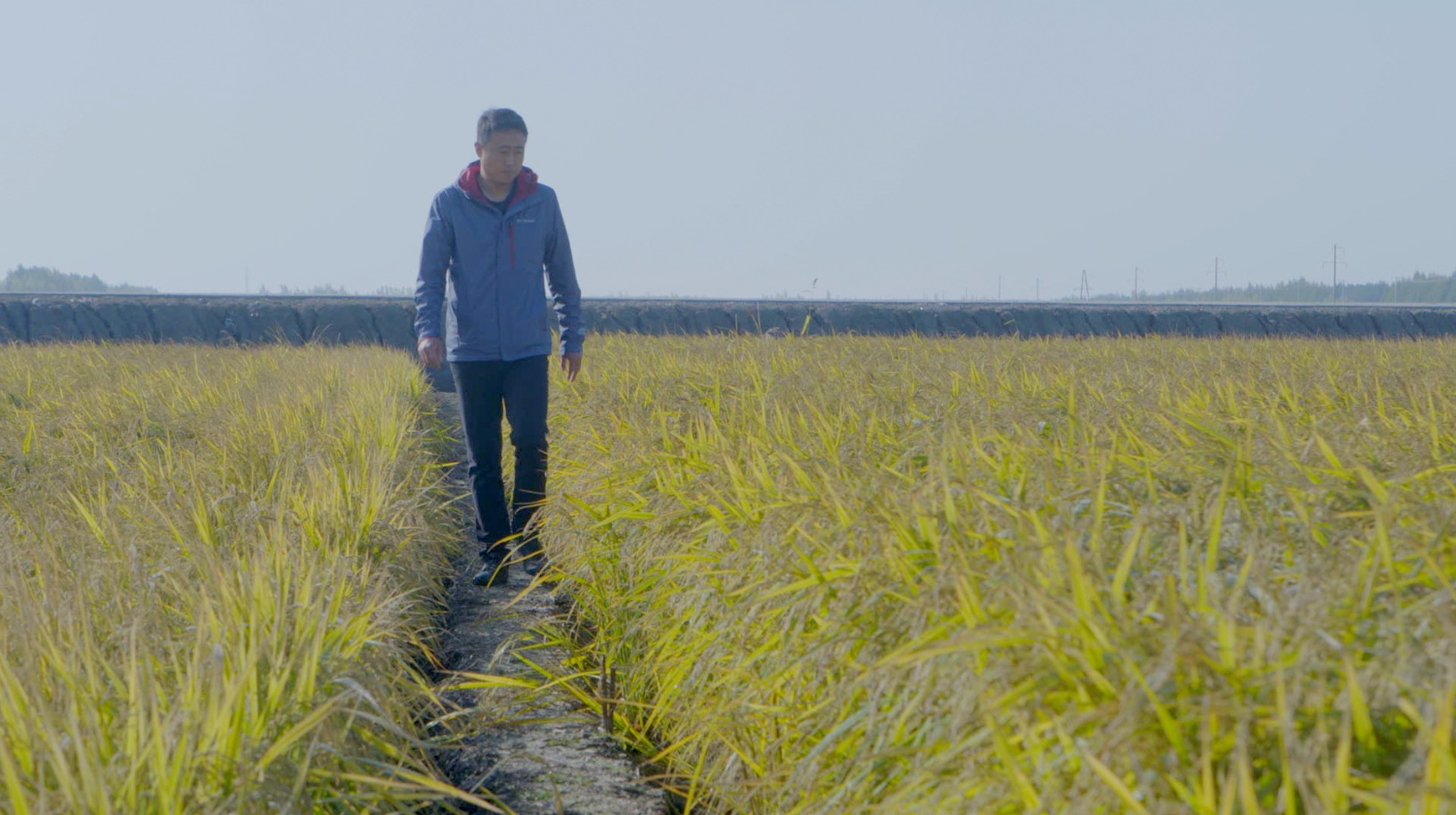 Sixty percent of China's population eat rice as their staple food, and most of the rice is produced in the country's "Rice Capital" in northeast China's Heilongjiang Province.

One in every nine bowls of rice on Chinese tables comes from Heilongjiang Province, which is why it's known as the "rice bowl of China."

Jiansanjiang is one of the most important commodity grain bases in the country. It is home to 15 state-owned farms. In 2018, Jiansanjiang produced 6.7 million tons of rice, which is enough to meet the annual rice needs of 52 million people.

This area was once known as Beidahuang or great northern wilderness because of its desolate landscape. However, after three generations of cultivation, it became China's big grain producer in the north and earned the name Beidacang, which loosely translates into great northern agricultural base or barn.

In recent years, farms in the "Rice Capital" have been transformed into smart farms, which led Chen Xinkun's work to become simple and efficient.

Chen is among one of the first batches of users of China's first mobile app focusing on smart farms.

The app, "Modern Agriculture Platform (MAP)," was developed by Sinochem Group, a state-owned enterprise in 2018. It assists rice farmers with production and management by monitoring and analyzing data.

Chen can access the temperature and sunlight of the paddy fields through the mobile app in real time because a little weather station on the fields will monitor the crops' data and transfer them to the app.

"The information displayed on the application is basically identical to the situation of the actual rice field," said Chen. "This is what smart agriculture has created for us."

By observing the temperature, humidity, wind direction and other information of this rice field, Chen can quickly determine the most suitable harvesting method, which is very important for rice farmers since different harvesting methods can affect the selling price.

During the annual harvest season, Chen's most difficult problem is coordinating loss settlements between insurance companies and farmers.

"Surveying is very difficult. You can't determine the acreage of the lodging area purely with your eyes, "said  Chen.

This year, a software's updated feature helped Chen solve this problem. It can quickly and accurately calculate the lodged area of a farmer's rice field using remote satellite sensing maps, which are more accurate and efficient than traditional manual measurements and are easily recognized by farmers and insurance companies.

Chen can now get the entire lodging rate of nearly 9,884 acres of rice in half a day using the software.

Jiang Hao, a senior agronomist at Qixing farm, left Beijing when he graduated from university a decade ago and volunteered to research rice production in Beidahuang. He is mainly responsible for experimenting and demonstrating new products, technology and farm machinery.

There is a big data center at Qixing farm, which gathers all of the crops' data collected by smart devices.

According to Jiang Hao, their farm has 200 monitoring devices and 20 small weather stations. These devices transmit a huge amount of data to the big data center every minute. After the production data is summarized, big data experts create data models. This forms an information database for the rice field, which helps farmers grow rice more efficiently.

Jiang said after the introduction of the Internet of things (IoT) device, they will have a comprehensive understanding of the growth environment of rice, including illumination, wind speed, water temperature, the level of the rice field and information of the mud.

5G base stations in Jiansanjiang

While 5G technology is gaining global attention, the farms in the administrative bureau of Jiansanjiang, where Chen and Jiang are from, have already started setting up 5G base stations.

5G is helping local farmers to build an unmanned farm.

Jiang said that the advent of 5G and other components along with various sensors are equivalent to a person's nervous system. They transmit detected data, including tactile and visual information, to a processor, and the amount of information transmitted is very large.

"The next generation's farms will need to process large amounts of information. This can only be done with the help of 5G," said Jiang.

With the construction of the 5G network in Jiansanjiang, smart farms there may one day be transformed into unmanned farms.  Farmers there might soon be able to do all their agricultural work with just the click of a button.

Three generations in the making

Thanks to three generations of Beidahuang residents' hard work and selfless dedication, the once barren land is now fertile.

Farms in Jiansanjiang have transitioned from manual planting to fully mechanized production. It could not have been realized without the efforts and innovation of the new generation of Beidahuang residents and embracing science and technology.

"As the third generation of Beidahuang, I have the confidence and responsibility to contribute to this black land and dedicate my youth to Beidahuang," said Chen.

In the future, Beidahuang residents will upgrade their farms with more advanced technology to provide with more bowls of rice on Chinese tables.