Wang Yaping receives an interview before the opening meeting of the first session of the 13th NPC in Beijing on March 5, 2018. (Photo: Xinhua/Liu Jinhai)

Astronaut Wang Yaping is in the spotlight again, but this time not for space travel. Instead, she debuted in a new role -- lawmaker -- at the annual session of China's national legislature.

With her signature ponytail, a neat military uniform and a wide smile, Wang, together with another nine deputies to the 13th National People's Congress (NPC), met the press for the first "passage interview" arranged for the opening day of the annual political meeting on Monday.

On the path leading toward the main hall of the Great Hall of the People, Wang described her experience of giving a televised science lesson to Chinese students in 2013 as "an unforgettable moment." 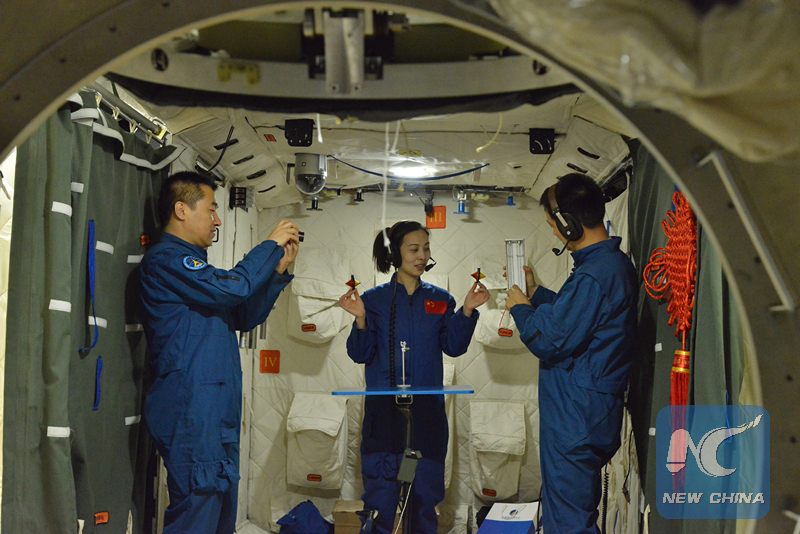 Some netizens praised Wang for her devotion and perseverance. Some called her a "space heroine" and referred to a poem by Chairman Mao to depict her as a female soldier who loves "to face the powder and not to powder the face."

As China's second female astronaut to enter space, Wang was elected from the country's armed forces as one of 2,980 deputies to China's 13th NPC. Before that, China's first female astronaut in space, Liu Yang, served for a five-year term as a deputy to the 12th NPC.

During the ongoing first session of the 13th NPC, Wang, along with other deputies elected from all walks of life, will elect state officials, review the government work report and discuss the Constitution revision.

In an exclusive interview with Xinhua, Wang said that she and other astronauts are preparing for work on the space station, as China plans to build a permanent manned space station by 2022.

Wang Yaping became a well-known figure in June 2013 after travelling for 15 days on the Shenzhou-10 spacecraft with two male crewmates, Nie Haisheng and Zhang Xiaoguang.

In one of the highlights of the mission, Wang delivered China's first televised science lecture to an audience of over 60 million schoolchildren and teachers across China. The lecture on basic physics principles lasted for 40 minutes and ignited the space dreams of millions of Chinese students.

Teacher and former NASA astronaut Barbara Morgan wrote a letter to Wang to express her pride and joy upon hearing the news.

Wang joined the Taikonaut Corps of the People's Liberation Army as part of China's second group of astronauts in 2010. The corps recruited its first group of 14 male astronauts in 1998 when it was founded.

During the past 20 years, 11 Chinese astronauts have completed six manned spaceflights, conducted over 100 experiments and orbited the earth for a total of 68 days and nights.

Wang Yaping (C) talks with children during an event on the 2017 Global Space Exploration Conference in Beijing on June 6, 2017. (Photo: Xinhua/Zhang Ling)

Born with a love for challenge, Wang recalled that she felt no fear returning from space.

"I just felt an overwhelming sense of achievement. I had fulfilled my dream," she said.

She can trace her bravery back to her childhood experience in a quiet village in east China's Shandong Province, where she developed a love for running.

"I always ran for the challenge and for the great joy after running over hills and across fields," she said, recalling her childhood.

Wang continued her path of bravery and was enrolled in 1997 as a pilot at an Air Force flight academy, where she tasted the excitement of sending a plane into dive for the first time during training.

Looking toward the future, Wang said that if she has the chance to land on the moon, she would like to dress like Chang'e, the moon goddess in a Chinese fairy tale, with a pet rabbit in her arms.