The Tibet Autonomous Region set up the League of Women Intellectuals last month - the first social organization initiated by female intellectuals from all walks of life in the region. The league's chairperson told the Global Times the group will not only unify women scholars in Tibet, but benefit more women in the region. 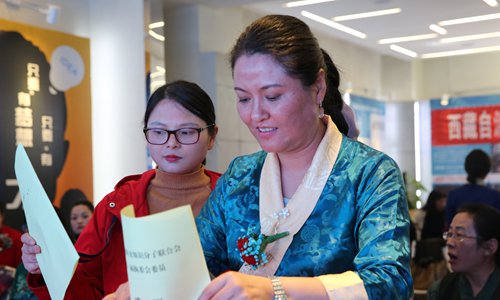 The league is made up of 77 women intellectuals from a wide range of sectors, such as social science, natural science, agriculture, meteorology, healthcare, media and law, according to Penpa Lhamo, chairperson of the league and deputy head of the Contemporary Studies Institute at the Tibet Academy of Social Sciences.

Among the members, 10 hold doctorate degrees, more than 30 holding master degrees and at least 10  studied abroad.

"Over the past 60 years, one of the most effective achievements of the national policies applied in the Tibet Autonomous Region is the fair right of access to education, social construction, participation and deliberation of politics for women," Penpa Lhamo said to the Global Times, adding that she hoped the federation could be a platform for women intellectuals to unify and play more effective roles to help women in Tibet.

Bianba Zhuoma, 50, now works as the head at the gynaecology and obstetrics department at a Lhasa hospital. About 2,800 babies are born in her department every year.

"I want to use this platform to know more intellectual women in Tibet in order to better publicize the information of female reproductive healthcare, especially among women in pastoral and rural areas," Bianba Zhuoma told the Global Times.

Tibet's maternal mortality rate has been the highest in China, Bianba Zhuoma noted. Due to poverty and the weak awareness of reproductive healthcare, many Tibetan women may suffer great risks during the delivery process.

Bianba Zhuoma recalled after she graduated from college and went back to her hometown, she was asked to deal with placenta for a pregnant mother in the countryside. "The woman has never thought of giving birth in the hospital," she said.

Some women in Tibet are still concerned about taking a gynecological examination because they think it is embarrassing to have doctors inspect their reproductive organs. Bianba Zhuoma wanted experts in educational and media sectors to dispel such misgivings.

"Tibetan women used to be treated as tools for bearing children, but now women's position in society has been promoted. They need to fit into the society and have been liberated from the previous situation," she said, hoping the newly-established organization for women intellectuals can expand the reach of this idea to more women in Tibet.

Sangye Lhamo is the offspring of herdsman. "When we lived in tent, if a person visited the family and found only women stayed in the tent, they would say there was nobody at home," said Sangye Lhamo, noting the social position of women was quite low in the past.

Due to the major economic and social developments in Tibet in the past 60 years since the start of democratic reform there, educated women in Tibet have seen noticeable improvements of women's empowerment in the family and society as a whole.

As a lawyer, Sangye Lhamo has been working on popularizing legal knowledge, especially to women, for years.

"In fact, whether it is in the pasturing area or agricultural area, the major labor is done by women. Women are the source of family's income, but their legal awareness is quite weak," said Sangye Lhamo, who gave an example of collecting caterpillar fungus.

Usually women collect more caterpillar fungus than men, but men control the money from the work, so some women didn't know how much they could earn, Sangye Lhamo noted.

"I am not persuading Tibetan wives to confront with their husbands; instead, women should have legal awareness to protect their legal interests."

"I hope our league can invite more females to join even if their academic background is not very high as long as we could reach our goal to meet real needs for Tibetan women," she said.

"We are the greatest beneficiary of the national policy of gender equality. Our generation has accepted good education and caught up the extraordinary opportunities which our grandmothers had not had. As a result, we could say we are the lucky dog of the era," Penpa Lhamo said, encouraging members of the league to drive other women intellectuals in Tibet to play better and more contributive roles.